ValueWalk
Home Politics The Baltics: The Next Tinderbox? 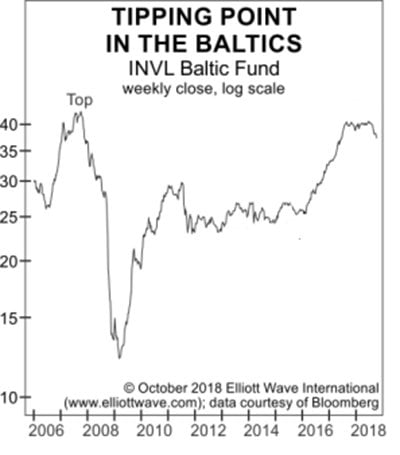 Political, economic and social problems continue to emerge in the EU’s Eastern European countries. While core Europe has so far escaped the tug of contraction, shares across the eastern bloc continue to drag down overall performance. The Stoxx EU Enlarged 15 Index, which tracks shares across the 12 Eastern Bloc nations that joined the EU in 2004, is down 62% from its November 2007 all-time high, reflecting a persistent negative mood in the region. In the Balkans, the October 6 win by Bosnian Serb leader Milorad Dodik is the latest manifestation of the regional mood. Dodik’s secessionist agenda won him a seat on Bosnia’s three-member state presidency, and the negative mood should serve to further his plans to carve out an independent state in the region.

In the Baltics, societal mood is also flirting with a major directional change. Shown here, the INVL Baltic Fund, a mutual fund registered in Lithuania that invests in regional equities and money markets, crashed a jaw-dropping 83% during the 2008 financial crisis. The fund bottomed alongside global stock markets in 2009 and, after nearly retracing its sell-off, peaked within spitting distance of its all-time high. If we’re correct about the larger-degree bear market that’s enveloping the Continent, then the fund has likely just tipped back over into a harrowing slide that will carry values to much lower levels.

Here, too, manifestations of negative mood should begin to multiply in the environment of a bear market. On October 6, Latvia “became the latest country whiplashed by rising populism,” as national elections saw one new party after another plow right through the status quo. Harmony Center, a pro-Russia, anti-establishment party, led with 20% of the vote, while second place went to KPV LV (translation: Who Does the Country Belong To?), a new anti-establishment party that was founded less than three years ago. The New Conservative Party, which consisted of just 223 Latvian citizens in 2014, took third place.

According to the New York Times, “discontent with Latvia’s traditional parties has been fed by a series of scandals,” as about 3,300 creditors of Latvia’s largest locally owned bank, ABLV, submitted claims on €2 billion of the bank’s assets in September. ABLV fell into liquidation earlier this year after the United States Treasury described the bank as a “sprawling, money-laundering enterprise.” The scandal also took down Europe’s longest-serving central bank chief, Ilmars Rimsevics, who had presided over Latvia’s central bank since 2001. Despite Rimsevics’ successful navigation of two global financial crises and a half-dozen or so regional crises, Latvia’s parliament voted 55 to 0 in March 2018 to ask him to resign. Financial scandals, political shakeups, and the public disgrace of elected officials all share the same root cause: a trend toward negative social mood.

Latvian politics have leaned toward Europe since 1991, when the Soviet Union collapsed. But a renewed bear market will worsen that relationship. According to the county’s departing Prime Minister, the election will “radically change Latvia’s position toward the European Union.”

Brian Whitmer is chief analyst for Elliott Wave International’s European Financial Forecast. His areas of interest include European equities, bonds and political developments, with an emphasis on the future of the European Union. He also authors the European stocks section of the firm’s Global Market Perspective. Whitmer completed his undergraduate degree in civil engineering from the University of Maryland and earned an MBA from Georgia Southern University. In a previous career, he served as a designer, planner and project manager for $100-million-plus civil and residential developments.