ValueWalk
Home Info-Graphs Spooky Building: The Biggest Skyscrapers Of The Future And Their Curse 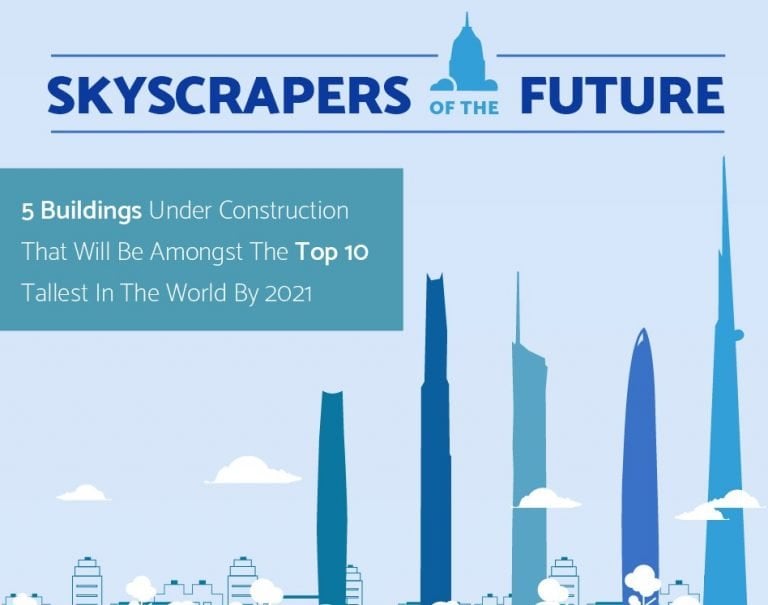 If you think that some of the tallest towers in the world are impressive now, then you’ve seen nothing yet. Not only will the next generation of skyscrapers be in amongst the tallest in the world, with one becoming THE tallest and by a long way, they are also far greener too. Here is a graphic produced by the guys over at Rubberbond that highlights these new cloud puncturing structures, the green features that have been incorporated, as well as a mysterious curse that seem to follow a super tower’s construction.

Let’s start from the smallest, tallest skyscraper of the future, the Baoneng Shenyang Global Financial Center. Once complete this building will be higher than South Korea’s Lotte World Tower and sees it become the ninth tallest in the world. The building will be built in the city of Liaoning, China and will cost around $1.5 billion once complete. It’ll have 114 floors, 34 of which will be dedicated office space, others will be part of a 320 room five star hotel and there’s also a executive club that’ll be housed in the giant pearl at the top of the tower.

The first skyscraper on the list to puncture the 2,000ft marker is the Rama IX Super Tower of Bangkok, Thailand and will be the sixth tallest tower in the world, rising above the Ping An Finance Centre and the Abraj Al-Bait Clock Tower. Surprisingly the building will cost $620 million, which is a lot less than the prior tower which is smaller. It’ll have 125 floors that will include office space, a six star hotel, a shopping mall and multiple restaurants too. In terms of sustainability tech it’ll have a highly efficient air conditioning system to maintain constant temperatures, will be clad insulated glass and solar panels will partially power the skyscraper. It will also become Thailand’s first ever 24h our office facility.

The award for the skyscraper with the catchiest name goes to Kuala Lumpur’s Merdeka PNB 118. This 2,083 feet high tower will sit at number four on the tallest towers list once built, knocking down the Shanghai Tower off its perch by 10 feet, and will become Malaysia’s tallest period. The project is expected to contribute as high as RM11 billion ($2.7 Billion) to the local economy and create over 10,000 employment opportunities across hundreds of industries.

The penultimate building is the Wuhan Greenland Center. This building will become the third tallest tower once complete and will cost a whopping $4.5 billion to construct. It’s one of the greenest buildings on the list too with features such as an energy generating ventilation system that uses rotary air-to-air enthalpy wheels to capture the exhaust air and use it for building heating purposes and a greywater recovery system that takes waste water from hotel laundry, sinks, and showers and then reuses it in the building’s evaporative cooling system.

And finally, last but certainly not least will be the soon to be tallest tower in the world, the Jeddah Tower. Not only will this become the tallest building, but it’ll do so by a big margin, by around 600 feet. Not only will this be constructed but there’ll also be a Jeddah Economic City around the tower too, costing a total of $20 billion. The tower will come with an amazing sky terrace that is 98 feet in diameter and will rotate around its centre and it’s also believed that Prince Talal intended to build it to a mile high, but a soil test found that the land is not suitable for a building that high. In terms of it’s green features it has been built so the facades align from the northeast and northwest to reduce the overall solar load. The tower’s zoning approach to design distributes potentially high system pressures while supporting sustainable construction practices of system component standardisation. This combined with the design’s effective infiltration control, helps mitigate the properties of stack effect by reducing pressure differential and controlling the movement of air throughout the building.

So what’s this curse you’ve talked about? Well, history has shown us a rather odd circumstance that occurs after a major skyscraper is built when it comes to the stock market. For example after the Petronas towers, The Taipei 101 tower and the burj Khalifa were built, the stock market always crashes. The Petronas towers were built between 1993 and 1996, in 97 the Asian financial crisis began. In 1999 the Taipei tower began construction, the year later the dot-com bubble happened. And finally the soon to be former tallest tower in the world, the Burj Khalifa was being constructed as the financial crisis of 2007-2009 broke. So, with all these new buildings being built, are we about to have another financial crisis? Let’s hope not!