ValueWalk
Home Business Guides Are You Hiding Your True Selves At Work? You’re Not Alone! 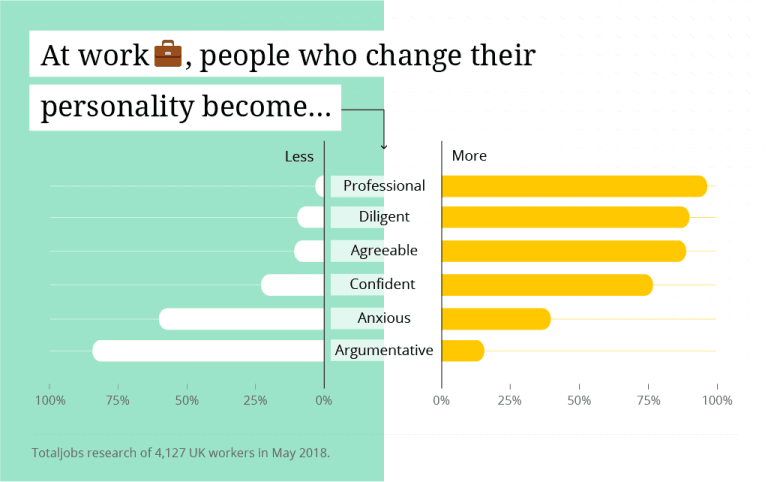 We’re constantly told to “be true to ourselves”, but how much do we really live up to this ethos? Do we ever hide true selves at work by the way we act, look or speak in a bid to earn acceptance among our peers? And if so, what are the consequences?

The term “covering” was coined by sociologist Ervin Goffman back in the 60s and is the act of hiding elements of our authentic selves in an effort to fit in. Covering can involve:

A new survey by leading job board totaljobs reveals the extent to which people cover their true selves at work. The results show that if you’ve ever changed the way you act, look or speak at work, you’re not alone.

The survey of 4,127 people revealed that the majority (52%) think people should change their appearance in order to fit in at work.  The most common reasons for changing our appearances are the nature of the job (45% stated this as a reason for changing the way they look at work), typical style doesn’t fit in with company (14%), typical style wouldn’t make a good impression (13%), have been discriminated against (6%), don’t want to draw attention to ethnicity (5%) and don’t want to draw attention to socio-economic background (4%).

The survey also revealed that if you’re gay you are twice as likely to change your appearance because you’ve been “discriminated against” (12%).

What about tattoos? The totaljobs survey also asked respondents what they think about having visible tattoos at work, and most people (62%) say they have no problems with tattoos at work. Out of respondents who have tattoos themselves, 42% admit they are worried about colleagues seeing them.

The study also shows a majority (60%) of respondents believe it is harder for those with tattoos to get a job while nearly half (46%) think tattoos can make it more difficult to get a promotion.

And can tattoos make it harder to be taken seriously at work? 42% agree with this statement.

The survey revealed that we’re not just changing the way we look at work, but also the way we speak. Indeed, 45% of respondents think it is normal to change the way you speak at work.

So why do we change the way we speak at work?

The survey revealed that many of us (one out of three) have had our accents mocked at work. At the same time, 13% admit of having thought less of someone or even mocked someone, due to their accent.

But what about “always being true to ourselves”? Surely our personalities can’t change that much during work hours? Well, you’d be surprised… As a matter of fact, the survey revealed that most people (52%) think that it is essential that people change their personality at work.

What are the implications of covering our true selves at work?

The study has shown that many us work hard to cover traits of our personality we believe are less desirable at work, so how does it make us feel? Surprisingly, many of us (46%) reported feeling more comfortable, while 43% of us agreed that covering can make us feel more confident.

The negative emotions of hiding our true selves at work were stress (28% revealed that covering stresses them out) and feel exposed (11%).

The study reveals a complex picture, and perhaps if companies did more to embrace different personalities, we’d be more inclined to show more of our true selves at work.

Dr. Roni Mermelshtine of Good&Co comments on the survey findings: “In an ideal world, our personalities would fit perfectly with our jobs and organisational cultures. But the world of work is far from perfect, and few employees can avoid the pressures to act against their natural character at some point in their career.”