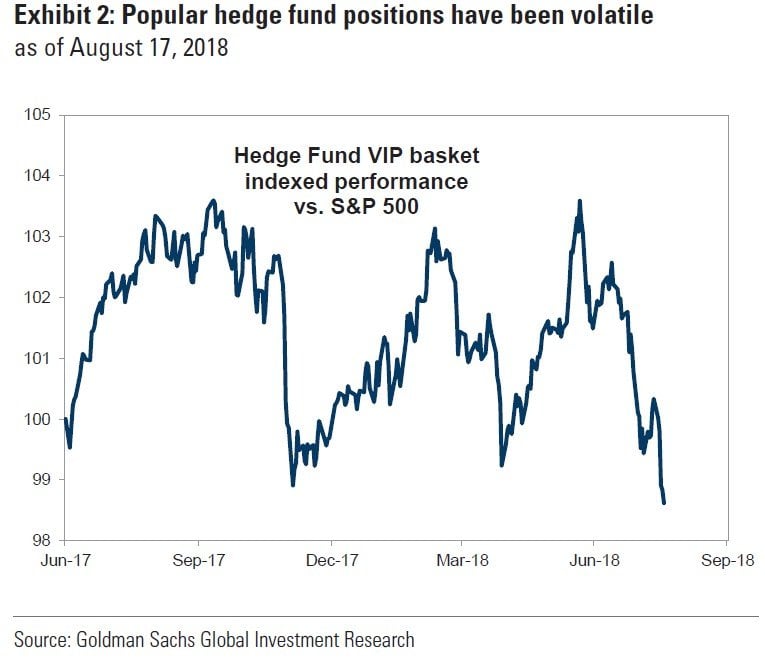 We keep hearing the same story over and over these days: the market is about to finally shift positions and tech is about to fall. It’s hard to see solid signs of this from looking at individual stock performance because it seems whenever tech favorites take the plunge, they come roaring back after a short period. Nonetheless, it looks like a growing number of hedge funds are starting to abandon the Tech ship after having been burned by the FANGs and other popular names.

Taking a bite out of FANG

The latest edition of the Goldman Sachs Hedge Fund Trend Monitor was released this week, and as of the beginning of the third quarter, the FANGs were still favorites among most funds. The monitor indicates that hedge funds are up 1% for the year through August 17, which could suggest an improving performance in the third quarter so far, based on a comparison with data from Eurekahedge, which estimated that hedge funds were up about 0.43% through the end of July.

According to a Goldman team led by Ben Snider, almost 100 hedge funds had Facebook as one of their top ten positions at the beginning of the quarter, based on data from 13F filings. Throughout most of July, the stock remained around $200 per share, but then toward the end of the month, it plunged, weighing broadly on hedge fund returns.

Facebook isn't the only Wall Street darling to cause problems for hedge funds in Q3. According to Goldman, their basket of the most popular long positions has been swinging wildly and has lagged the S&P 500 by 500 basis points since the end of June.

The top five most popular stocks among hedge funds are Facebook, Amazon, Microsoft, Alphabet and NXP Semiconductors. Out of that group, the only stock that hasn't disappointed over the last month has been Amazon. According to Goldman, those five stocks have averaged flat returns since the beginning of July.

Hedge funds were also struck by popular shorts which continued to outperform. 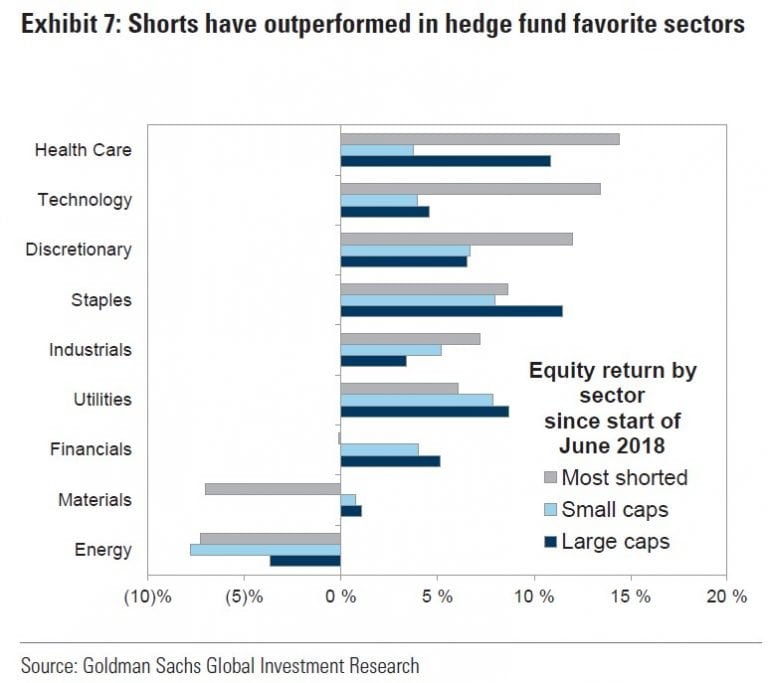 Although Technology was still the biggest net portfolio weight at 25%, Goldman said it's now the smallest sector overweight relative to the Russell 3000. Meanwhile, Health Care seems to be becoming the new favorite of hedge funds, and it's easy to see why. Over the last three months, the sector has been outperforming, driven by mergers and acquisitions and easing concerns about policy while volatility spread across the Tech sector.

According to Goldman, the Health Care sector was the second biggest weight among hedge funds at 17%, and its tilt was the biggest of all sectors at +417 basis points. 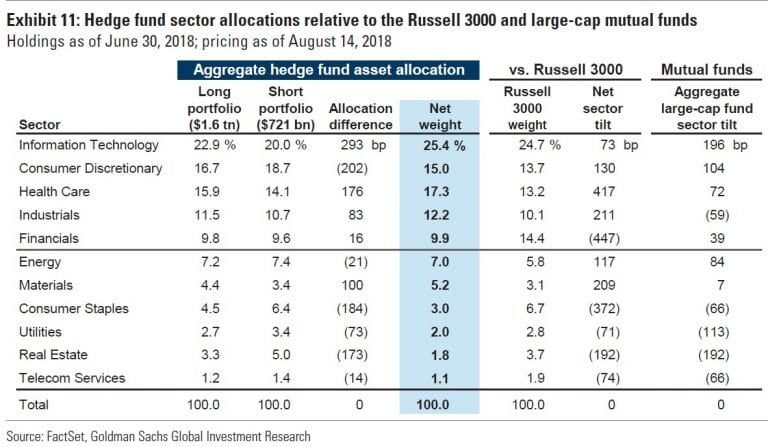 The firm attributes the rotation from Information Technology into Health Care to the plunge in Facebook stock. According to the Goldman team, the rotation was already underway, but after Facebook stock tumbled, it accelerated. Before the social network reported disappointing earnings numbers, 230 hedge funds (or 28%) owned it, they explained, with an average weight of 4%. 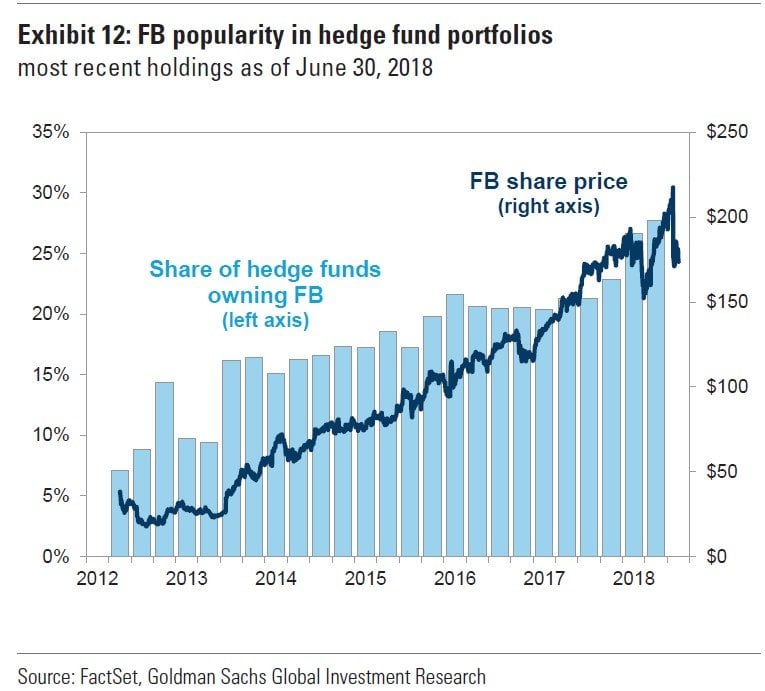 Approaching this rotation from a different angle, they added that at the beginning of the year, 20 stocks in their list of the most popular stocks (or 40%) were in the Tech sector, and that was the highest share they've ever recorded. Also at the beginning of the year, only three of the most popular hedge fund stocks were in the Health Care sector, which was the lowest share for the sector in a decade.

However, their latest count of the most popular hedge fund stocks points to a "modest shift" from IT to Health Care. In fact, this rotation actually started in the middle of last year. 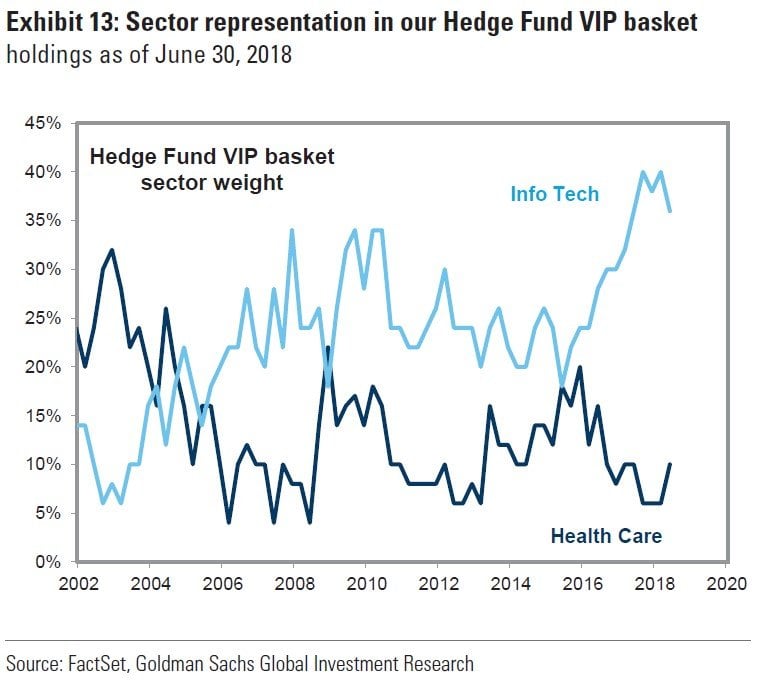 Hedge funds which have been rotating out of Tech

We looked at 13F data to identify which hedge funds have begun the rotation out of Tech and into Health Care over the last few quarters. Among the hedge funds which sold or cut their positions in Facebook stock during the second quarter are Daniel Loeb's Third Point, Lee Ainslie's Maverick Capital, Stephen Mandel's Lone Pine Capital, David Tepper's Appaloosa Management and David Wolfe's Wedgewood Partners.

Hedge funds were also selling or reducing their positions in many other popular Tech names during the second quarter, including: