Systemic Risk as a Complexity Problem

We can never predict the exact point at which the system transforms. We live in a stochastic world and the final little push out of equilibrium may happen randomly. But what we can say is when the system has become inherently unstable, fragile, vulnerable, ready for small perturbations to trigger critical transitions, in phase transition zone.

‘’If we have reasons to suspect the possibility of a critical transition, the analysis of generic early warning signals

may be a significant step forward when it comes to judging whether the probability of a transition is increasing.’’

It is hard to be bearish in a bull market, expecting a major sell-off to strike at any moment throughout blue-sky markets. Oftentimes, markets rebound from lows and critical technical levels such as 200 days moving averages, death crosses and flash crashes - in spite of bad fundamentals or blunt evidence of trouble ahead. However, this is no surprise, and actually is typical of other infamous market crashes over the course of financial history. Without exceptions, the worst declines described in the history books were preceded by lower than average volatility, stronger than average earnings momentum, good GDP growth, bullish sentiment and multiple vicious rebounds after early timid declines. Bull traps were visible on the pathways of 1929, 1987, 2000 and 2007, most notably.

The signposts of a potential market crash are coming in with increasing hubris. The increasing frequency of VAR-shocks is one such indicator, which comes in confirmation of our broader market assessment of systemic fragility for global markets.

A few recent case studies stand out, where investors all of a sudden wanted out of a market like people fleeing from a burning building: 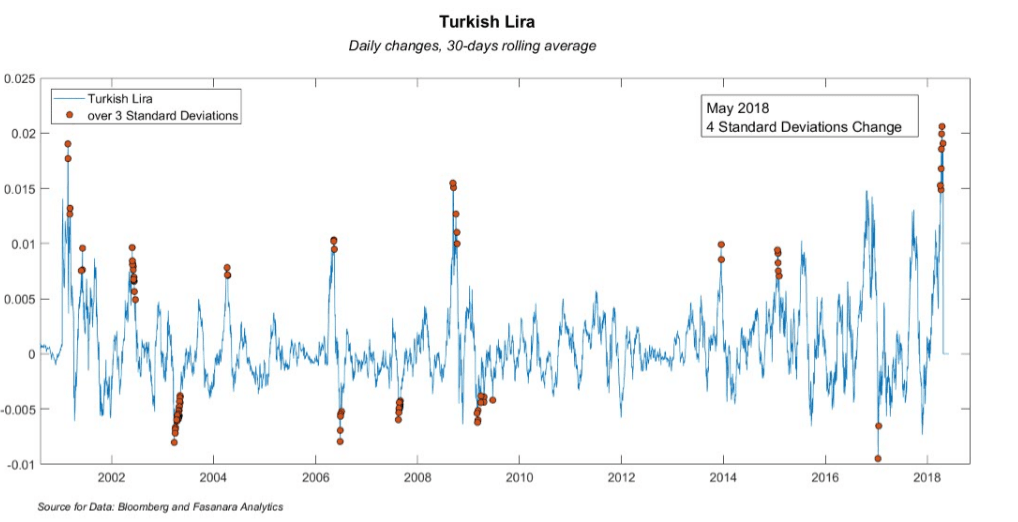 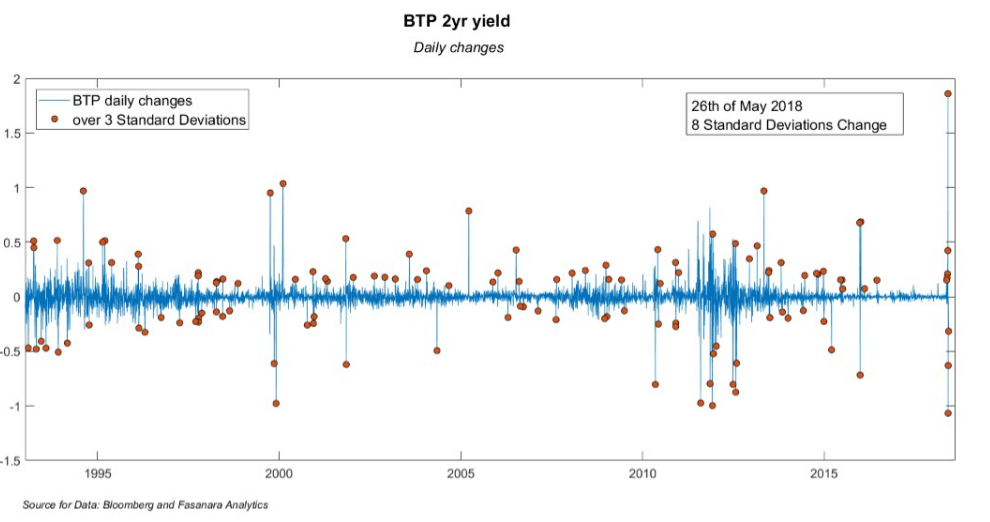 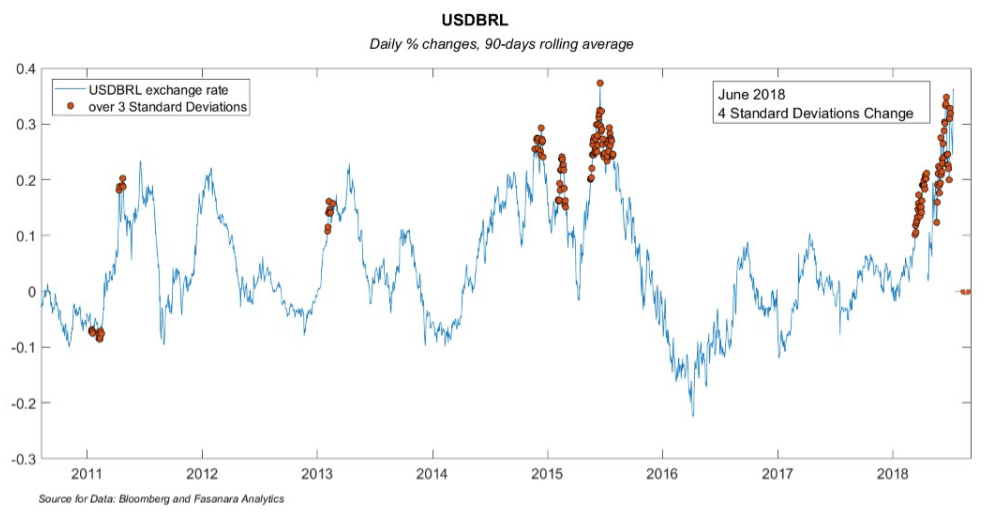 Beyond the idiosyncrasies of each one of these nutcases taken in isolation, a trend is easy to spot, as they represent early warning signals for system instability of the broader financial network. If this view is right, a critical transition and a moment  of final rupture for global markets may then loom ahead.

What’s lining up for the next showdown / flash crash? Perhaps heavy hitters?

The list of crash hallmarks and early warning signals for market fragility is long and getting longer. On accounts of our framework of analysis looking at systemic risks as a complexity problem, we can isolate the following line items:

In a critical state, markets are vulnerable to the point that a small disturbance - a butterfly - can trigger a large adjustment: the famous butterfly of the chaos theory, whose wings flapping in Brazil can cause an earthquake in Texas. Here though, there is more than one butterfly in the room. More than butterfly, triggers look like elephants. And more than a room, financial markets look like a china shop (given their fragility, overconcentration and lack of buffers). There are then several elephants in the china shop, as regulators hide and markets nap over ever-changing overfitting elusive economic narratives.

The reasons why the market is prone to an historical downfall is to be found in the syncronicity of capacity constraints across the several dimensions of market expansion:

All at the same time. Recipe for gap risks.

What is a risk is also an opportunity. We stand ready to capture the moment of adjustment as it draws nearer. It may happen faster and more brutally than most anticipate.

Our thoughts are expanded upon in this video slideshow. 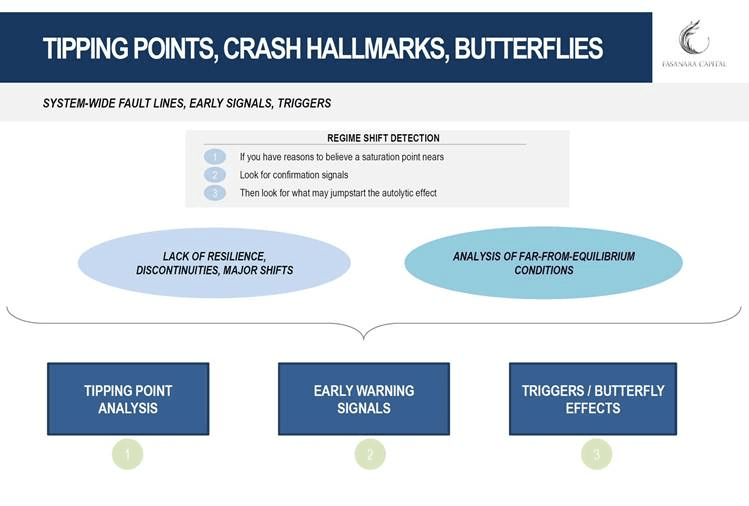 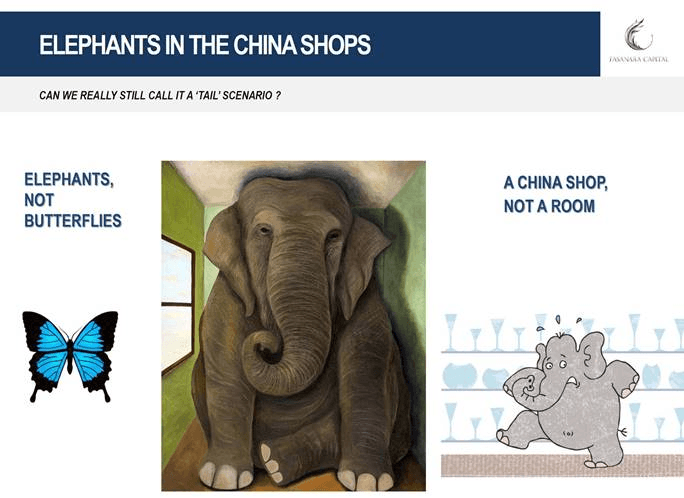 Authorized and Regulated by the Financial Conduct Authority (“FCA”)