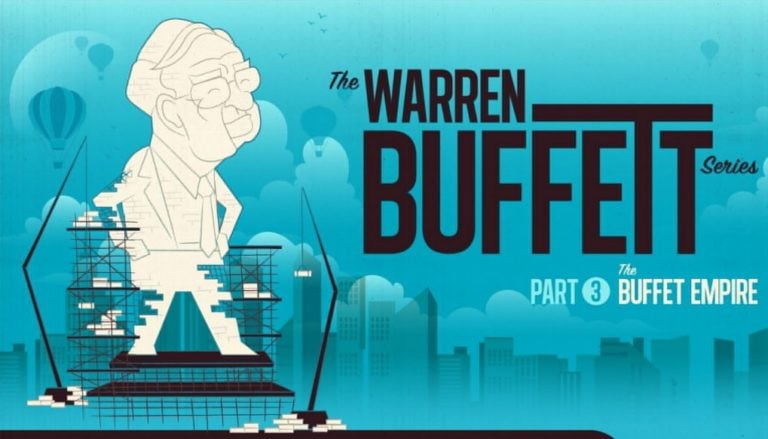 Most people know Berkshire Hathaway as the massive conglomerate that serves as the investment vehicle for Warren Buffett’s $83 billion fortune. However, far fewer people know what this giant does, and how it actually makes its money!

Today’s infographic breaks down the many companies and investments that Berkshire Hathaway owns.

It’s the third part of the Warren Buffett Series, which we’ve done in partnership with finder.com, a personal finance site that helps people make better decisions – whether they want to jump on the cryptocurrency craze or follow Buffett’s more traditional path to financial success.

Explore the full-screen version of this graphic 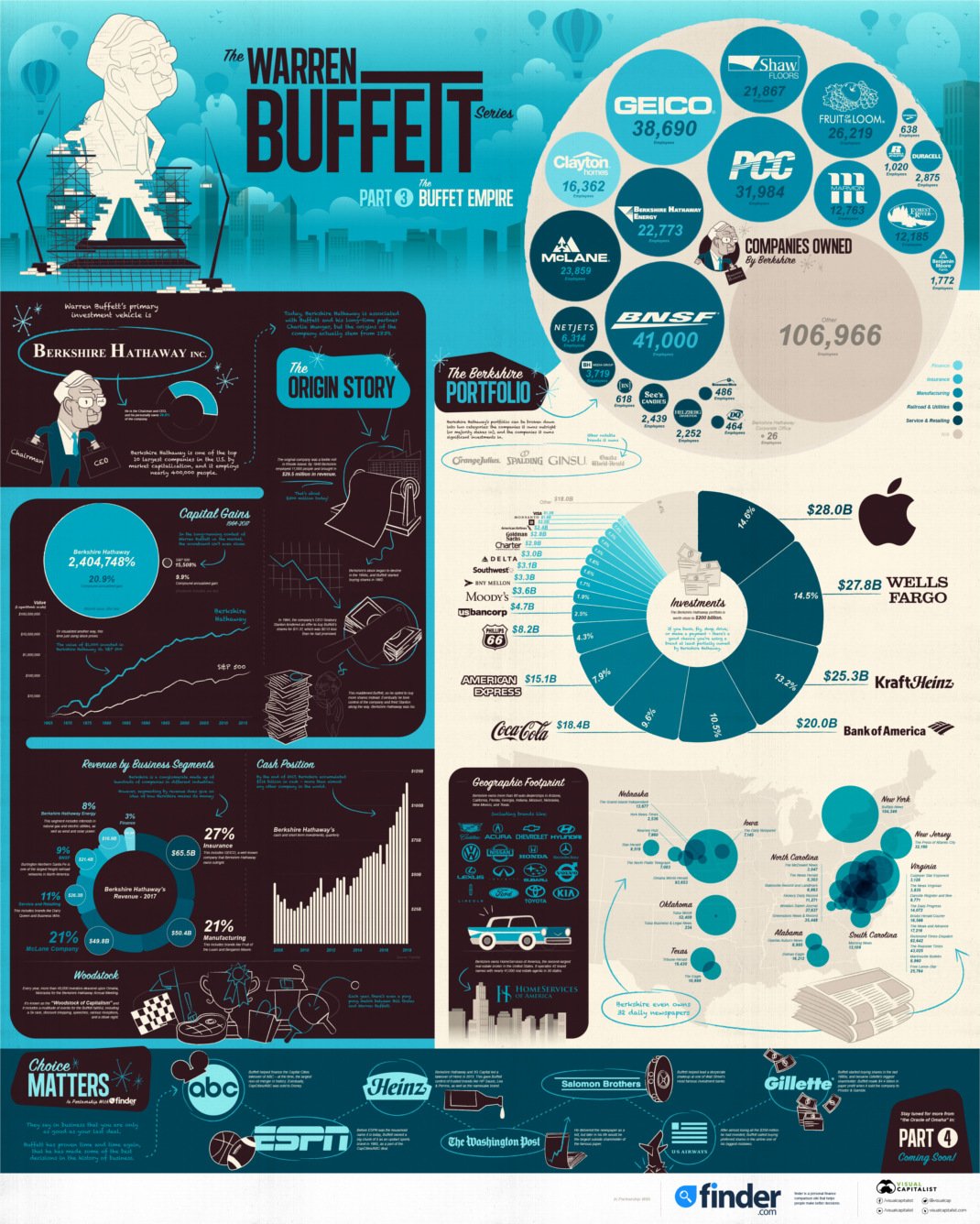 The Warren Buffett Empire in One Giant Chart

This giant infographic is best viewed using the full-size version. Also, don’t forget to check out Part 1 and Part 2 of our Warren Buffett Series.

If you look at any ranking of the world’s richest people, you will notice that most of the names derive their wealth from building individual, successful companies.

Warren Buffett, who appears third on such a list, is completely unique in this sense. Through his holding company Berkshire Hathaway, he has bought, sold, or invested in hundreds of companies over the years, and their industries are all over the map. These investments include consumer goods companies like Coca-Cola, daily national newspapers like The Washington Post, and insurance companies like GEICO.

Buffett currently owns 36.8% of Berkshire – and at the time of publishing, Berkshire Hathaway is worth an impressive $480 billion, employing 377,000 people across many different industries.

Although Berkshire Hathaway is today associated with Buffett and his long-time partner Charlie Munger, the origins of the company actually stem from 1839.

The original company was a textile mill in Rhode Island, and by 1948 Berkshire employed 11,000 people and brought in $29.5 million in revenue (about $300 million in today’s dollars).

After Berkshire’s stock began to decline in the late 1950s, Buffett saw value in the company and started accumulating shares. By 1964, Buffett wanted out, and the company’s CEO Seabury Stanton tendered an offer to buy Buffett’s shares for $11.37, which was $0.13 less than he had promised.

This made Buffett mad, and instead of taking the offer, he opted to buy more shares. Eventually he took control of the company and fired Stanton.

The company was his, and the rest is history.

In the long-running contest of Warren Buffett vs. the market, the scoreboard isn’t even close:

Source: BH Annual Report. BH’s market value is after-tax, and S&P 500 is pre-tax, including dividends.If you’re wondering how Warren Buffett developed such an impressive investing record, it’s worth seeing Part 2 of this series: Inside Buffett’s Brain.

The Warren Buffett Empire is diverse, and made up of hundreds of companies in different industries.

However, segmenting by revenue does give an idea of how Berkshire makes its money:

Berkshire Hathaway owns well-known brands ranging from Dairy Queen to Duracell. Here are all those companies listed by number of employees:

Importantly, you’ll notice that there are only 26 employees in Berkshire Hathaway’s corporate office – that’s because Buffett is adamant that portfolio companies need to be well-managed in their own right, and he thinks this decentralization is a key to his success.

Here are the companies Berkshire Hathaway has significant investments in – the whole portfolio is worth nearly $200 billion:

The portfolio is pretty much a microcosm of the American economy: it features banks, airlines, consumer goods companies, and even tech behemoths like Apple.

Lastly, it’s worth noting that Buffett doesn’t stop there – his company also owns 80 auto dealerships, the second-largest real estate broker in the country (HomeServices of America), and even 32 daily newspapers.

Deals that Made the Empire

The Warren Buffett Empire wouldn’t exist without Buffett being involved in some of most famous deals in business history. Below are some of the big names Buffett has been involved with.

Buffett helped finance the Capital Cities takeover of ABC – at the time, the largest non-oil merger in history. Eventually, CapCities/ABC was sold to Disney.

Before ESPN was the household name it is today, Buffett owned a big chunk of it as an upstart sports brand in 1985, as a part of the CapCities/ABC deal.

Berkshire Hathaway and 3G Capital led a takeover of Heinz in 2013. This gave Buffett control of trusted brands like HP Sauce, Lea & Perrins, as well as the namesake brand.

Buffett delivered the newspaper as a kid, but later in his life would be the largest outside shareholder of the famous paper.

Buffett helped lead a desperate shakeup at one of Wall Street’s most famous investment banks.

After almost losing all the $358 million he had invested, Buffett called buying preferred shares in the airline one of his biggest mistakes.

Buffett started buying shares in the last 1980s, and became Gillette’s biggest shareholder. Buffett made $4.4 billion in paper profit when it sold the company to Proctor & Gamble.