ValueWalk
Home Business Subprime Chaos: The Auto Bubble’s Bursting And The Data Is Worse Than... 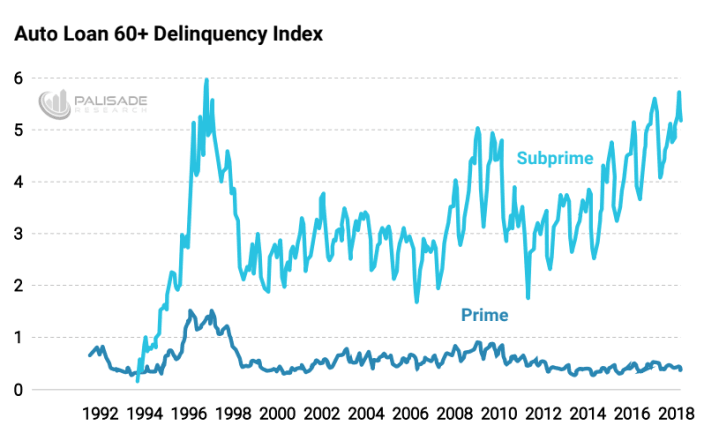 Last week, used car prices had their biggest drop since 2009 – directly after the financial market meltdown of 2008.

Delinquent subprime auto-loans are higher than they were in the last recession.

What’s interesting – and worrisome – is that consumers are defaulting on subprime auto loans when the economy is supposable doing ‘very well’.

Like I wrote last week – there are cracks under the economy’s foundation. And it’s like a bucket of cold water in the face of the mainstream financial media that’s pushing the ‘growth’ story.

We must ask ourselves – “if things are going so well, why are subprime loan delinquencies at a 22-year high?”

I can’t help but feel a bit nostalgic. This was the same situation that led up to the 2008 housing crisis. . .

First, there was massive growth in mortgage-backed securities and mortgage debt. Then, the Federal Reserve – led by Alan Greenspan – began aggressively raising rates after years of low rates. Soon after, subprime loans started blowing up – which trickled into the prime loans. And eventually, everything was in chaos.

Using the often-ignored Austrian Business Cycle Theory (ABCT) – coined by the little-known but brilliant economist Ludwig Von Mises – I am blaming the Fed for all this.

Thanks to the Fed, a near decade of zero-interest rate policies (ZIRP) and three rounds of Quantitative Easing (which totaled over $3.8 trillion in printed money) – the consumers became hooked on cheap auto loan financings. . . 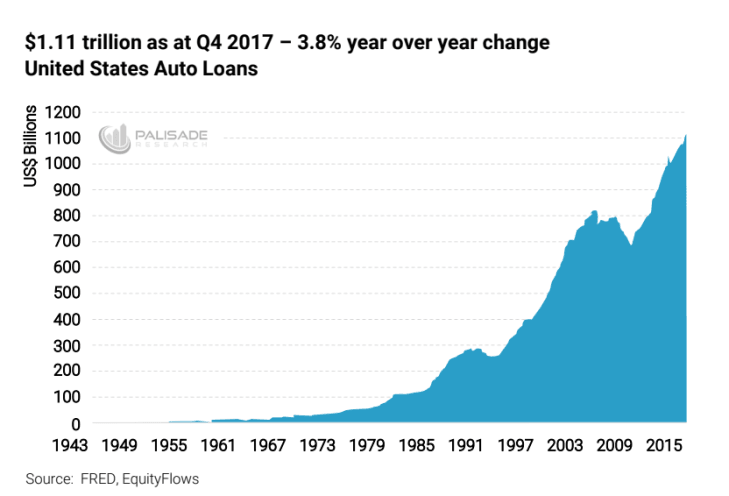 Their policies made the entire system fragile by getting consumers addicted to cheap debt through their easy money.

They then began tightening credit – crippling the borrowers.

Think of it this way – imagine you’re addicted to alcohol. And your bartender keeps giving you cheap drinks each night for months. Eventually, from drinking way more than you should’ve been able to afford, you now have a very high tolerance.

But suddenly – the bartender becomes strict and starts giving you less booze. He tells you, “sorry but no more free alcohol for you.” Problem is, you wouldn’t have drank so much if you had to pay full price for it.

Now you’re left with awful withdrawals – scrounging together all the extra money you can just to pay for a drink. But the only way you can really afford to feel better is if he starts giving out free drinks again or you painfully detox. 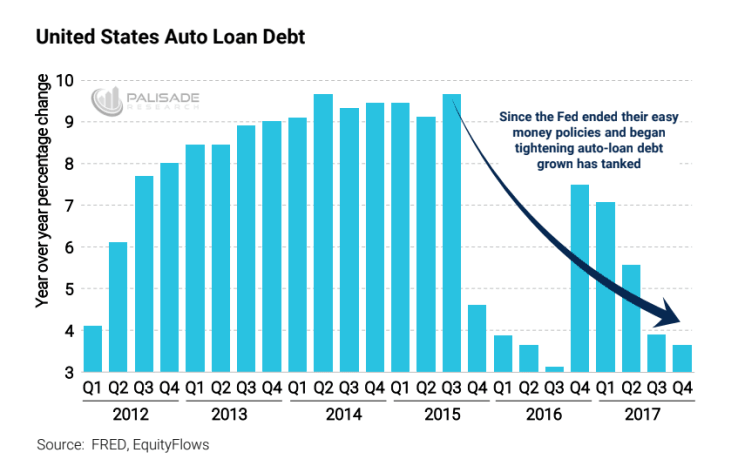 Clearly the higher rates had an impact on new auto loans.

But a bigger – and more pressing – problem is that the Fed’s short-term interest rate hikes are making these current subprime auto loans unserviceable. The borrowers are having a harder time paying more interest for an asset that depreciates 15% the moment they take it off the lot.

Clearly, affordability is becoming a problem. . . 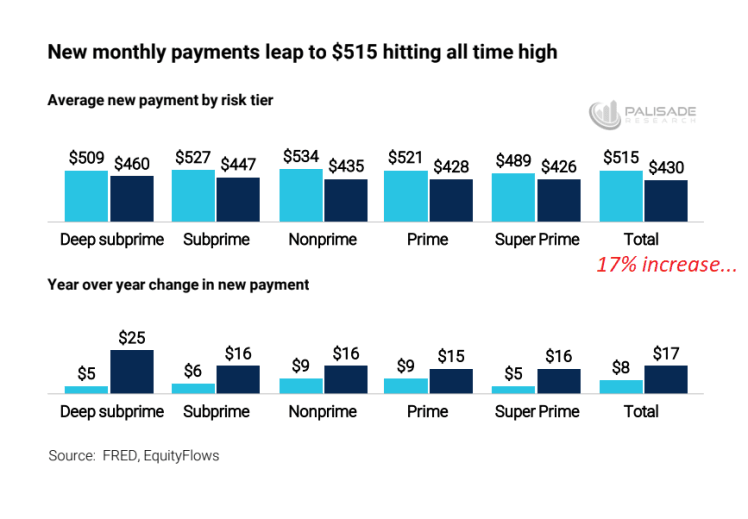 As I learned from Ludwig Von Mises and the other brilliant Austrian economists – the Fed created a bubble in auto-loans by keeping rates low and printing trillions. And now they’re going to blow the whole thing up with their rate hikes.

I expect delinquent subprime loans to keep hitting new highs. And I expect the ‘growth’ story the pundits keep pushing down our throats will fade.

Because even if the auto-loan industry and general economy hasn’t rolled over yet, each new Fed rate hike pushes us one step closer to the edge.

So, with our Macro-Fragility Index (MFI) alarmingly high in the auto sector – I’m going to spend time looking for opportunities here.

History shows us that when things start their descent into collapse – the subprime market is the first to get hit.