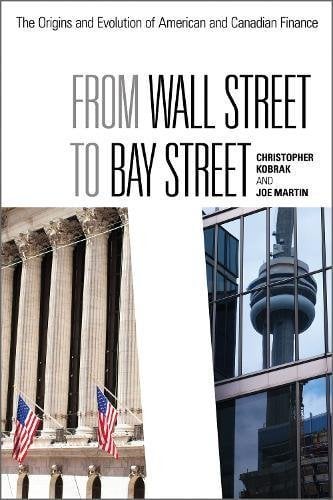 If your first reaction upon seeing the title of this post was “from Wall Street to where?” you personify one reason that Christopher Kobrak and Joe Martin felt it necessary to write From Wall Street to Bay Street: The Origins and Evolution of American and Canadian Finance (University of Toronto Press, 2018). The book traces the intertwined yet uniquely defined paths of financial development in the U.S. and Canada from colonial times to the 2008 financial collapse.

From Wall Street to Bay Street: The Origins and Evolution of American and Canadian Finance by Joe Martin, Chris Kobrak

It’s of course impossible in a few paragraphs to do justice to the authors’ thorough history, so I decided to confine myself to a single event and to the authors’ conclusion about the relative success of the Canadian financial system.

The event, which resonates today, was the passage of the infamous Smoot Hawley Tariff, signed into law by Herbert Hoover in 1930. According to many economists, it was one of the reasons a stock market correction turned into a worldwide depression. The tariff “increased the rate on dutiable-good imports from 39 to 53 per cent, the highest in history. Canada’s exports to the United States plummeted by 70 per cent. … The full force of the Great Depression fell upon Canada’s staple exports—hardest hit were the markets for cattle, dried codfish, copper, and wheat…. Average incomes declined by 48 per cent, but in the Prairie province of Saskatchewan they declined by 72 per cent.”

Smoot Hawley, which exacerbated an already weak grain market for Canada, was introduced in the midst of a Canadian election campaign. The U.S. tariff became a major campaign issue, especially among farmers, and “the result was a resounding defeat of the Liberal government of William Lyon Mackenzie King and the election of a Conservative government led by R. B. Bennett, a former bank director and the richest man to ever hold the office of prime minister of Canada.” In the wake of the Depression, the three largest provinces elected populist governments.

Over the years the Canadian financial system has exhibited more self-restraint than has the American. “It has avoided the corporate governance scandals that nearly destroyed investor faith in American equities in the nineteenth century, in the 1920s, and most recently during the first few years of the twenty-first. Its legal system has avoided the excesses of the American tort system, making insurance cheaper and easier to acquire. Its corporate governance system remained more elitist and is still more activist than the American, whose New Deal legislation in the 1930s increased the obstacles and decreased the incentives for active shareholder governance, a shift that has only recently begun to be reversed. Perhaps most importantly, Canada’s more concentrated, domestic banks have given it a large measure of financial independence from America and the rest of the world.”

The American and Canadian financial systems reflect their national cultures and national priorities. But perhaps a sober reflection on how each country got to where it is today could prompt some tweaks to the systems to make them both more vibrant and more stable. From Wall Street to Bay Street is a good place to gain material for such reflection.