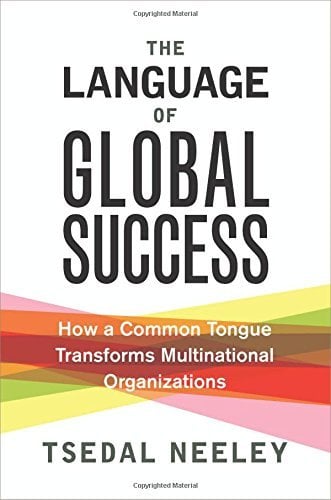 Rakuten required its global workforce to be proficient in English or be demoted. Harvard’s Tsedal Neeley examines this strategy in her book.

Effective communication is a critical part of a good corporate culture. But for organizations that crisscross the globe, clear communication can be one of the biggest obstacles to overcome, especially in a multilingual workplace. In her new book, The Language of Global Success: How a Common Tongue Transforms Multinational Organizations, Harvard Business School professor Tsedal Neeley makes the case for using a single language to unify a global workforce linguistically and culturally. She examined the decision by Japanese e-commerce giant Rakuten to have employees worldwide use English as their business language. Neely spoke on the [email protected] show, which airs on SiriusXM channel 111, about the impact of the company’s monolingual mandate. (Listen to the full podcast at the top of the page.)

The Language of Global Success: How a Common Tongue Transforms Multinational Organizations

An edited transcript of the conservation follows.

[email protected]: Why did Rakuten decide to make this shift and have all their global employees speak English?

Tsedal Neeley: Rakuten was reaching near 90% market share in their domestic market. You can think of them as Amazon meets eBay meets Expedia meets any e-commerce activity. The only way they could grow their public company is by aggressively globalizing their firm. But how do they do that if no one in the firm can adequately engage with members of other countries, whether within the company or outside of the company? The CEO decided that they needed to bring English [to the workplace], which is the business language of the world, in order to accelerate their globalization plans.

[email protected]: We’re talking about employees in Japan, Brazil and other locations learning English in about two years?

Neeley: That’s exactly right. The mandate was that employees had two years to clear an English proficiency test sufficient enough to do business, or face demotion. There was such urgency to learn this global communication language in order to execute on their globalization plans. By the way, the idea of English as a common language is not uncommon. Close to 60% of multinational organizations operate in English, so Rakuten was merely trying to catch up very, very quickly.

If you think about it, English is required for global collaboration and global work because it’s the only means for members, who are highly interconnected with the advent of technology, to engage with one another, to engage with suppliers, to engage with customers. This has been an ongoing practice for over two decades. The difference today is things move very, very fast. Industries, particularly in the internet sector, have to solve their communication problems very fast, and a common language is the way to do it. That also allows them to create a common corporate culture by which everyone in the firm operates. In the absence of a common language, you don’t have a cohesive corporate culture that everyone follows and lives out.

“Employees had two years to clear an English proficiency test sufficient enough to do business, or face demotion.”

[email protected]: How has Rakuten benefited from the English mandate?

Neeley: I got the rare privilege of following them for more than five years to look for the benefits. One benefit is that the members of the organization from all corners of the world are now collaborating with each other in new and important ways. Another benefit is the corporate culture being able to move in all parts of the organization. Companies always say to us that their corporate culture is one of their most important competitive advantages, and it’s a great disadvantage if everyone in the organization can’t live it out. They’ve been able to do that.

In addition, they are becoming a pretty prominent global brand. They are the new Golden State Warriors jersey patch sponsor. They are now the FC Barcelona key sponsor — it no longer says Qatar Airways, it says Rakuten. They’ve gone from 200 million users to 1.1 billion users in over five years.

[email protected]: Prior to the Golden State Warriors sponsorship, I hadn’t heard of Rakuten. I don’t think many Americans have.

Neeley: Isn’t that interesting? They’re one of those companies that people are probably a Rakuten customer or user in the U.S., but they don’t know it. They own Ebates and Buy.com. If anyone ever used Affiliate Marketing in New York, that’s a Rakuten company. Rakuten is the largest shareholder of Lyft. Part of what they’re doing now is consolidating their brands, and they are increasingly becoming a better known entity.

[email protected]: Does a single-language mandate promote a more amiable work culture and a greater understanding across different cultures?

Neeley: Your question is very insightful because the workforce transformed with the language mandate. With Rakuten, there are three groups that emerged pretty forcefully. The Japanese employees living in Japan are now communicating in English and having access to people around the world in new ways. It’s been really an enhancing experience for them, although they had to climb a very steep learning curve. They worked harder and longer than ever before to acquire this new linguistic skill.

“Close to 60% of multinational organizations operate in English language, so Rakuten was merely trying to catch up very, very quickly.”

The employees in the U.S. had to begin to operate in a much more globally integrated company, with a Japanese base, in new and important ways. Even for some of their entities that have been acquired some seven years earlier, it took the English language transformation for them to be fully integrated into the folds of the company.

And then there were the employees who were neither Japanese nor English speakers. I’m talking about employees in places like Brazil and Germany and Thailand and Indonesia. They have had to climb a steep learning curve of the English language and the Japanese corporate culture. But that group adapted very quickly and has proven to be the most effective global employees by being able to detach from their own languages and cultures and migrate to new ones at the workplace.

[email protected]: You put the employees in three categories. Explain that.

Neeley: The first group, the Japanese employees, I call them Linguistic Expats. They go into their offices in Japan on a regular basis, but they have to detach from their native languages and migrate to a different language. They’re expats in their own country, so to speak. The American employees that I mentioned go into their offices on a regular basis in the U.S. but have to operate in a different culture. I call them Cultural Expats because they are operating like expats culturally in their own countries.

I call the third group Dual Expats because they have to migrate to different languages and cultures despite the fact that they are living in their native countries. Every member of the organization has to adapt linguistically or culturally and grow and enhance themselves in order to be effective global employees.

[email protected]: Rakuten had the forethought that good communication, not just between company and customer but also among employees, is a vital ingredient to success.

Neeley: It’s hugely vital. If you are looking to have knowledge sharing across the firm, leveraging all that you have within your company, leveraging the talent that you have, leveraging purchasing power, leveraging marketing insights from around the world, the only way that you can do that is if you have employees at all levels engaged with one another. How do they do that if they can’t even speak a common language? That’s the reason English has become the common business language of the world, but English is not the only one. We’ve had common languages in commerce for centuries. But it’s different in today’s marketplace because of the sheer rapidity and interconnectedness of the world.

[email protected]: It’s one thing for the company to have regional understanding within Southeast Asia, but it’s different to have the global perspective.

Neeley: Even the regional understanding is something they have to work really hard towards because the cultures are so distinct and different, and languages are so distinct and different. There is the regional component and the global perspective, and all are reliant on a common language. You cannot do it in the absence of that. By the way, there are over 300 million Chinese nationals that are actively learning English in order to engage with the global marketplace. In fact, there are more English speakers in China than there are in the United States today.

“In the absence of a common language, you don’t have a cohesive corporate culture that everyone follows and lives out.”

[email protected]: What does it mean for the global economy to have one common language?

But there’s a second piece of it. For the global economy it means that individuals, no matter where they live, no matter what they speak, no matter what culture they come from, are now going to have to engage much more with others who are different from them. McKinsey & Co. found in their research that 3.5 billion people will be participating in the global labor workforce by 2030. We need to prepare for that.

[email protected]: It’s interesting that even with all the digital connectivity, Rakuten realized that the spoken word is still important.

Neeley: The spoken word is incredibly important. Interconnectedness doesn’t manifest if people are not able to understand each other. You need to be able to understand one another, you need to be able to engage one another. Interconnectedness in the absence of a common language is meaningless. That’s what they’ve understood and responded to, as have many global organizations. The difference between Rakuten and other companies is that Rakuten was not only intentional about it, but they moved extremely fast to grow their organization. They were doing so while in their home market and had very deep pockets. They could move really fast.

[email protected]: The bottom line is, if you are a company that is not at least considering this type of move to grow your business, then you are falling behind so many other entities around the globe.

Neeley: You’re falling very behind. And it’s inevitable and it’s crucial. Because I engage with many companies around the world that have to contend with the communication gap, I’ll tell you that it’s a multi-year project. It takes resources and deliberate planning. Transforming a workforce is a multiyear process.

When Rakuten did this in 2010, the CEO of Honda publicly criticized Rakuten CEO Hiroshi Mikitani, saying this is crazy, you are a Japanese company, why are you even doing this? Five years later, Honda did the exact same thing. They are trying to catch up. The difference is that they’re five years too late.