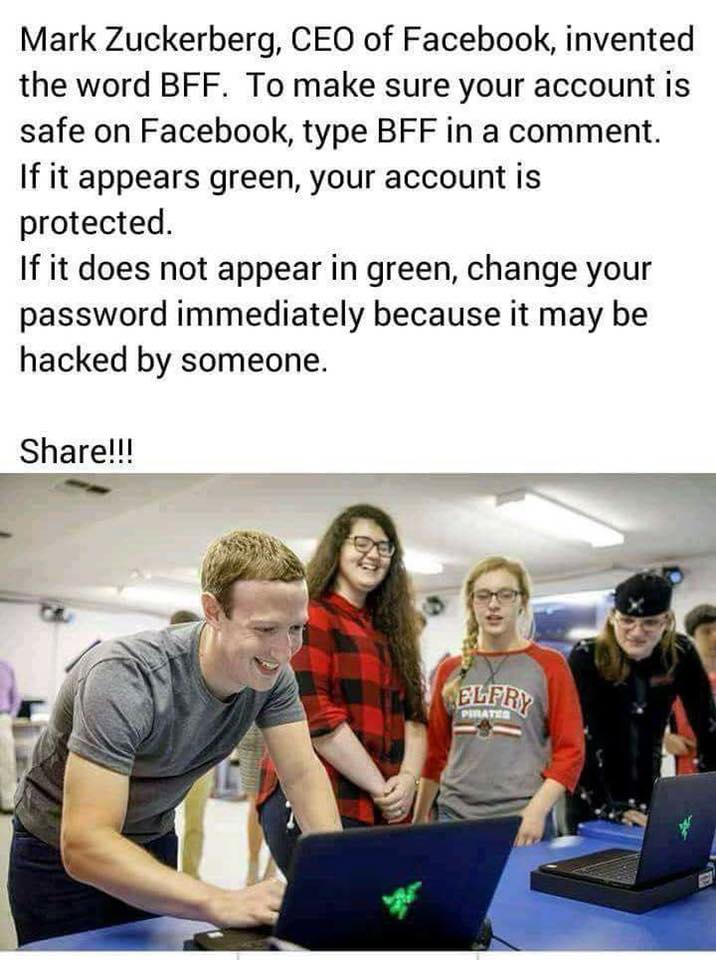 The latest scandal, and perhaps one of the biggest in Facebook history, is the Cambridge Analytica leak. For the unaware, a leaker from a data analytics firm gave evidence that Cambridge Analytica used millions of instances of personal information to create micro-targeted political ads and convince users to vote for Donald Trump in the past election – perhaps swaying the voters in his favor. While many were aware that Facebook was using their data to make a profit for quite some time, it has never been exposed on such a wide scale, and Facebook is paying the price for it with massive drops in stock price. Many people are, understandably, on edge about the misuse of their information, and some people are taking advantage of that hysteria – for one reason or another. The latest viral Facebook fad is the Facebook Green BFF status, which insists that your account is protected if the word BFF turns green when you post it – a claim which is completely false.

After it was revealed that 50 million Facebook users unwittingly had their private information used by a company working for Donald Trump, many people were quite upset with Facebook. While the campaign to delete their Facebook has its flaws – with many people flocking to Instagram, unaware that the company is also owned by the social media giant – it will definitely have more of an effect when it comes to protecting your information than taking part in the Facebook Green BFF trend. Once your information is posted online, it’s next to impossible to completely erase your digital footprint, but taking down your Facebook profile is probably a good start.

What doesn’t have any effect at all, however, is the Facebook Green BFF status where people claim that commenting “BFF” and seeing it turn green is an indication that your data is safe, while having it not change colors means you need to change your password because your data is at risk.

Whether this is an attempt to troll or some sort of sophisticated data mining remains unclear, but the Facebook Green BFF post and the viral following arises out of a misunderstanding of some of Facebook features. Back in October of 2017, Facebook added a new feature that would occasionally play animations when certain keywords were used in comments. “BFF”, alongside words like “congratulations” and “xoxo”, trigger multi-colored text and animations when used.

The Facebook Green BFF status fad is especially clever because the green text only triggers occasionally, making it seem more legitimate as only some of the people posting will get the results they’re looking for. This will cause many people to panic and change their password unnecessarily, and whoever made the post is clearly trying to capitalize on the panic surrounding the Cambridge Analytica scandal. As mentioned above, it’s difficult to tell if this is a light-hearted prank or if it’s another attempt to mine personal information. Either way, it’s in your best interest to avoid the Facebook Green BFF post. If you’re concerned about the safety of your data, your best bet is to delete Facebook or remove as much personal information as you can. The Facebook Green BFF post is misleading at best, and won’t do much of anything besides incite panic or a false sense of security.

While it’s next to impossible to remove your information entirely, the Cambridge Analytica scandal serves as a reminder to pay attention to what we’re posting online. Moving forward, making sure to take care that the information released online is something you’re okay with others knowing is important to ensuring that your data doesn’t get used in a nefarious way.