Grocery is widely seen as the next major area of growth for Amazon.com, Inc. (NASDAQ:AMZN), but the online retailer isn’t the only one with this goldmine in view as a priority. Walmart Inc (NYSE:WMT) recently announced that it’s expanding its online grocery delivery business, setting it up for a knockdown, drag-out fight with Amazon.

In a note to investors this week, Piper Jaffray analyst Michael Olson released the results of his firm’s survey on preferences for grocery shopping, especially for online versus brick-and-mortar shopping. They found that most consumers still plan to shop in stores this year, while 15% plan to shop online. That’s nearly flat with the 16% who said they planned to shop online in July 2017, not long after Amazon announced that it was acquiring Whole Foods, “despite the reduction in ‘hype’ around grocery delivery” that Olson observed in the weeks after that announcement.

He believes that as more and more consumers become comfortable with buying food online and taking grocery delivery, Amazon will be in a good position to take share. He also expects the online retailer to become a major driver of this push toward adoption of grocery delivery as it improves its offerings over time.

Olson has an Overweight rating and $1,650 price target on Amazon stock.

Meanwhile, Walmart has been testing online grocery delivery in six markets, and the tests were apparently successful, as the big box retailer plans to roll the service out to more than 100 metropolitan areas. By the end of this year, the company expects to be offering grocery delivery service to at least 40% of U.S. households. In addition to the expansion of its grocery delivery service, Walmart is also doubling the number of stores that offer grocery pickup, a service analysts are referring to as “click and collect.”

Credit Suisse analyst Seth Sigman said in a note this week that about 96% of grocery sales are still happening offline, which means that this key area of retail is still mostly untapped. Because grocery delivery is more “operationally” difficult, he believes that fewer competitors will be successful in this area. He also thinks the odds are in Walmart’s favor because of how early it is in the game.

As a result, he believes the big box retailer will be able to lead the growth in grocery delivery and possibly even “attain share well above their online market share today in other categories.” He also said that his work indicates that this is already happening for Walmart, which he estimates will already have more than double its “typical online share” in fiscal 2018.

Do Amazon and Walmart really serve the same customers?

Grocery delivery is certainly becoming more and more competitive as time goes on, so it makes sense that analysts would see Amazon and Walmart facing off with each other. However, Sigman says the two companies serve different sets of customers.

Amazon is now rolling out two-hour grocery delivery services to some of its Whole Foods stores, and it’s not the only threat to Walmart in this area. He also points out that Instacart is expanding, while Target aims to get its Shipt service rolled out in all of its stores by late this year. Sigman believes that “in theory,” Walmart should have a wider reach in grocery delivery because of how many stores it has. Additionally, he said the demographics of the big box retailer’s customers are different than those of others in the grocery delivery space: 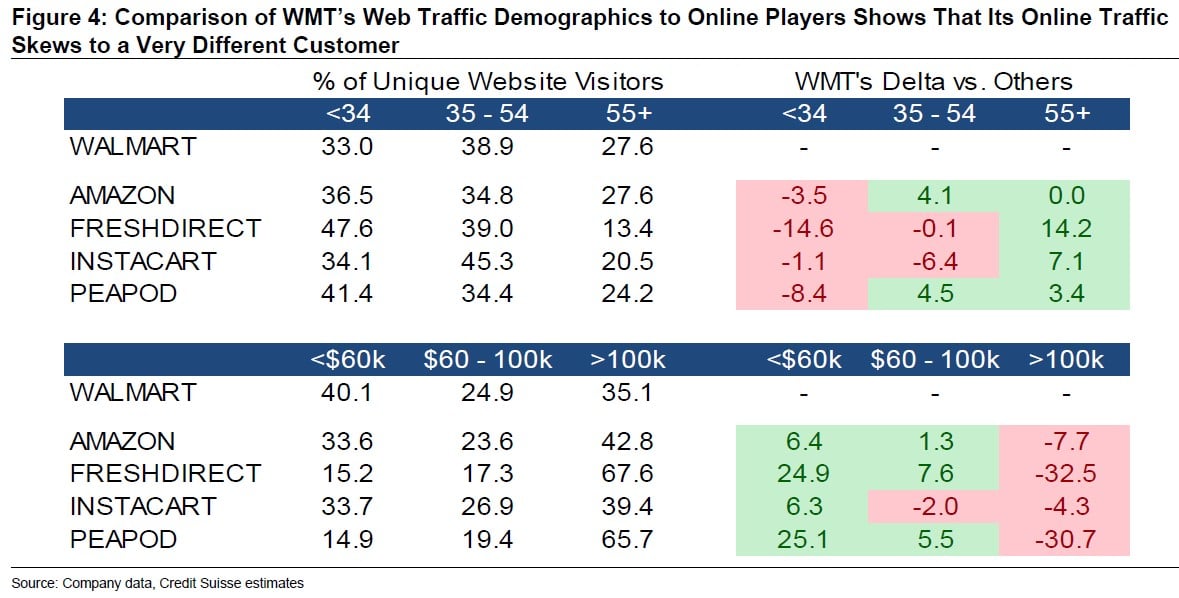 Amazon has Walmart in its sights

Multiple analysts have pointed out the overlap between Amazon’s and Whole Foods’ customers, indicating that they serve very similar demographics. This makes it easier to see the difference between the two retailers’ customer bases, at least based on average income levels. However, Amazon has shown that it has Walmart’s customers in its sights.

Last year, it announced that it was slashing the monthly subscription rate for low-income customers, and this year, it said it was expanding its Prime discount to all Medicaid recipients, slashing the monthly price to $5.99 per month. The fact that Prime also includes free two-day shipping and access to movies and TV shows adds yet another dynamic that Walmart doesn’t offer, enabling low-income customers to cut the cord and ditch expensive cable TV.