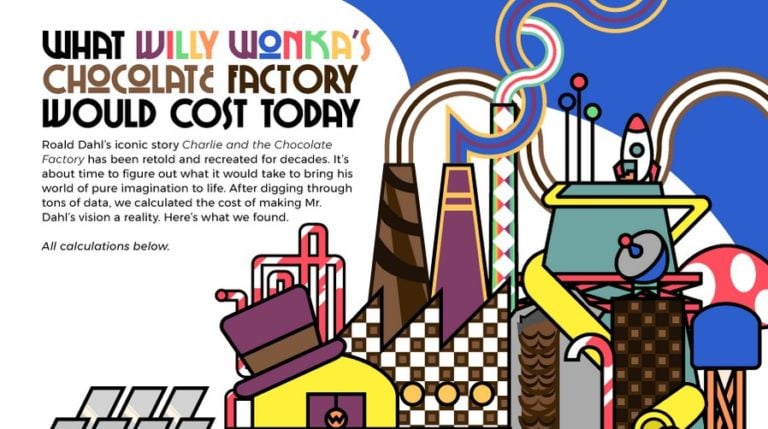 Ronald Dahl’s iconic story Charlie and the Chocolate Factory has been retold and recreated for decades.  It’s about time to figure out what it would talk to bring his factory to life.  The brilliant minds at Advanced Technology Services have set out to do just that. After digging through tons of data, they were able to calculate the cost of making Willy Wonka’s Chocolate Factory a reality.  Here’s what they found:

Considering the brand recognition and the wide variety of products, we’ve put Mr. Wonka’s company on par with chocolate giant Cadbury.  In 2010, Kraft Foods acquired Cadbury for $19 billion.  Add in inflation over the last few years and you get a total company valuation of $21.5 billion.

Recently, a Nestle factory in the UK disclosed the monetary savings associated with changing some of their equipment.  They stated this changed represented 8% of its total power requirements and saved them roughly $157,000 per year.  That means their early energy costs come to a total of just short of $2 million dollars.

By estimating the costs of using Jolly Ranchers and Life Savers to make sheets of edible wallpaper, we were able to come up with a total cost of $100.75 for enough raw goods to cover 653 square feet of a hallway. By studying a recent installation of edible wallpaper in a London elevator, we’ve estimated the total labor time at 160 hours.  Multiply that by the average rate for a painter per hour and add the cost of goods and you arrive at $2,600.

The average goose egg weights 144 grams.  If we multiply that by the current price of gold, we can calculate that Veruca Salt’s prized egg had a value of $6,000.

To see the full analysis on the cost of Willy Wonka's Chocolate factory, check out the infographic below.