ValueWalk
Home Economics US Inflation: Signs Are Pointing Up

Market volatility has spiked recently, driven largely by growing concerns about rising inflation and interest rates. We think the volatility is exaggerated, but we’re not surprised inflation is rising—and rates along with it.

One of the great mysteries of the current expansion is that even with strong economic performance, inflation has been very slow to respond. Many have even questioned the Phillips curve, a fundamental construct of macroeconomics and central banking: when an economy is strong, it will over time generate inflationary pressures. (We believe that structural factors are at play, too.)

The solid-growth, low-inflation mix has allowed the Fed to keep monetary policy very accommodative and to raise rates only gradually the last few quarters, even as unemployment has fallen to near-record lows. That environment has underpinned very strong financial market performance, so it’s little wonder that so many investors are focused so intently on inflation today.

Evidence of Higher Inflation Is Mounting

We do expect inflation to rise this year, and interest rates along with it. In fact, higher inflation has been a key driver of our 2018 forecast for some time.

And we’re seeing increasing signs of rising price pressure. Over the last six months, prices are up at a pace (Display) that, if maintained, would translate to a 2.5% increase in the consumer price index (CPI) over 12 months. January’s data showed an even faster increase—core CPI rose by 0.35% month over month, the fastest in more than a decade. 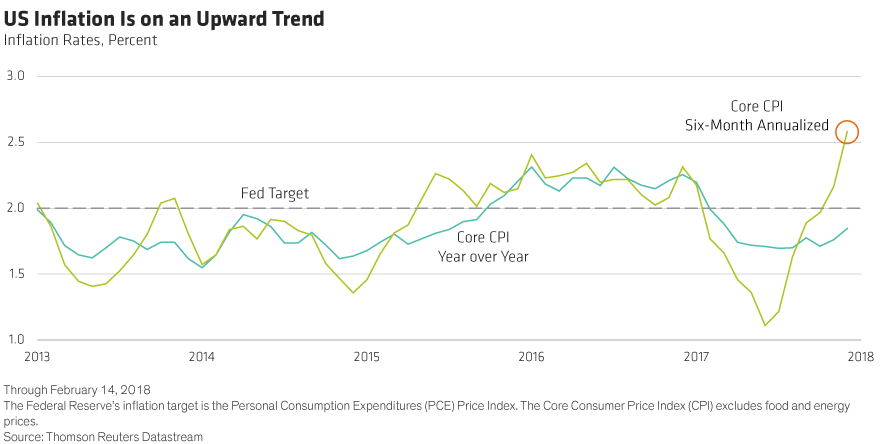 Of course, there’s risk in using shorter time horizons to measure CPI, which is typically a slow-moving variable. But other indicators point the same way. Service-price inflation, which is less subject to commodity or currency impacts, is up nearly 2.5% year over year. Wages are rising at their fastest rate this cycle: this should give consumers more to spend and allow businesses to regain pricing power.

Fiscal Deterioration Likely to Play a Role, Too

All this adds up to a strong case for rising inflation, which underpins our forecast for four rate hikes from the Federal Reserve in 2018—up from three last year—and for rising longer-term rates.

Fiscal policy is likely to push upward on prices over time, too. The bill from last year’s tax reform and the budget deal earlier this year both generate fiscal stimulus, putting more money into the economy at a time of strong growth and rising inflation. The numbers aren’t necessarily big enough to represent a sea change, but the fiscal deterioration is another reason we’re confident inflation is headed up.

However, the increase in the inflation rate over the last couple of months seems exaggerated, and the rate in the medium term is likely to be a bit more subdued.

Changing consumer behavior—more purchasing online and less in stores—has made data around the holiday season particularly hard to interpret. This means we don’t fear the sort of runaway inflation that could happen if last month’s increase were repeated.

The bottom line: It seems clear that US inflation is likely to rise, and interest rates as well. The underlying fundamentals in the US economy remain strong, so it should be able to withstand these conditions, especially since the rise in inflation will be more gradual in the next few months than it has been in the last few, in our view.

However, markets are likely to see more volatility, too, and higher rates and inflation will impact returns. That’s not the end of the world, given how strong returns have been in recent years, but it makes sense to take a closer look at how investment strategies are positioned to address opportunities and risks.