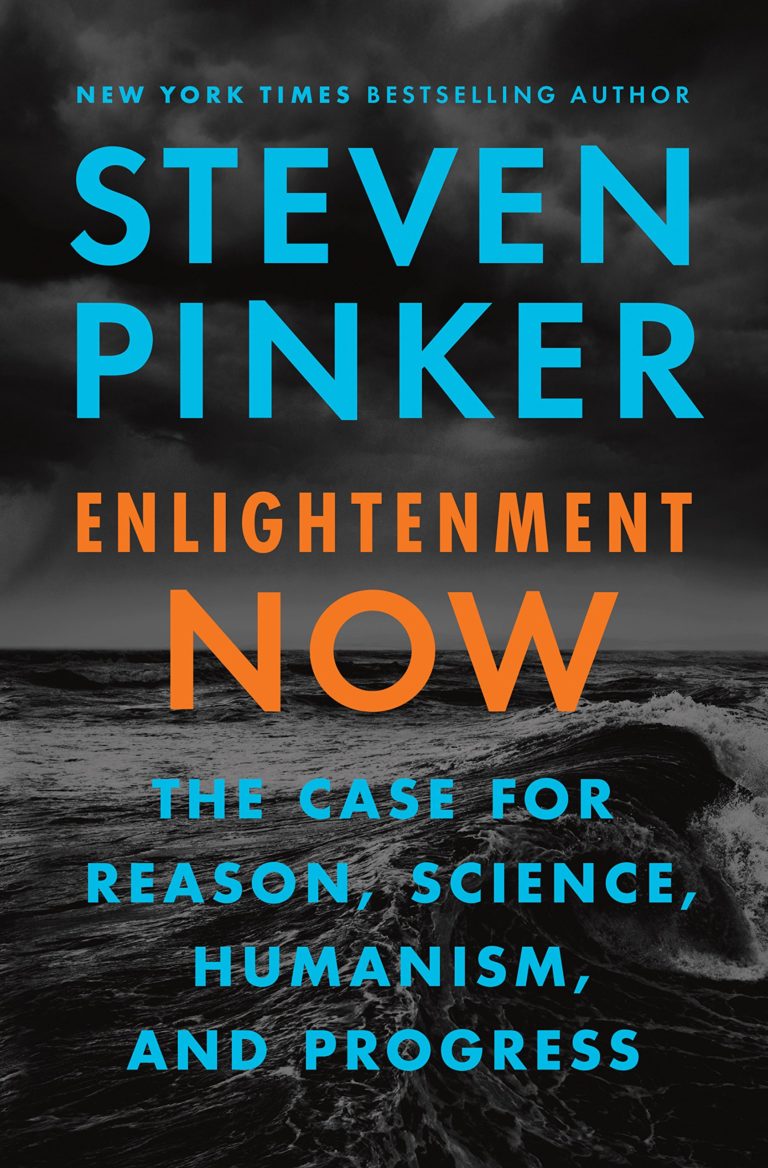 What is human progress? Is it happening? Can it continue? These are some of the questions that Steven Pinker, Harvard University Professor and Human Progress Board Member, answers in his new book Enlightenment Now: The Case for Reason, Science, Humanism, and Progress. As he shows, on most measures of human well-being, the world is much better off than before, even if relatively few people understand or appreciate the progress that humanity has made.

Enlightenment Now: The Case for Reason, Science, Humanism, and Progress by Steven Pinker

Pinker also offers reasons for optimism ahead. Does that make him a modern-day Pollyanna? Far from it. Pinker acknowledges future challenges but remains unwavering in his belief that by keeping true to the ideas of the Enlightenment, the world can go on improving for many generations to come.

Before delving into the book, a few words about the author are necessary. Steven Pinker is a psychologist and one of the world’s leading authorities on language and the mind. He is also one of America’s leading public intellectuals, with occasional columns in The New York Times, Time, and The New Republic. Many of his previous books, including The Stuff of Thought, The Blank Slate, Words and Rules, How the Mind Works, and The Language Instinct, have been widely praised. In 2011, Pinker came out with a groundbreaking and highly discussed book, The Better Angels of Our Nature: Why Violence Has Declined. According to Pinker:

Tribal warfare was nine times as deadly as war and genocide in the 20th century. The murder rate in medieval Europe was more than thirty times what it is today. Slavery, sadistic punishments, and frivolous executions were unexceptionable features of life for millennia, then were suddenly abolished. Wars between developed countries have vanished, and even in the developing world, wars kill a fraction of the numbers they did a few decades ago. Rape, hate crimes, deadly riots, child abuse — all substantially down.

One of the reasons for that decline, Pinker averred in Better Angels, was the Humanitarian Revolution, which took off around the time of the European Enlightenment in the 17th and 18th centuries, and “saw the first organized movements to abolish slavery, dueling, judicial torture, superstitious killing, sadistic punishment, and cruelty to animals, together with the first stirrings of systematic pacifism.” It is to the main ideas of the Enlightenment that Pinker returns with the release of his new book on February 13.

According to Pinker, the spread of reason, science, and humanism has resulted in a great deal of human progress. But what is progress? That may seem like a tough question to answer in these culturally relativistic times. But Pinker offers an unashamedly humanistic definition of progress that is shared by many global organizations and initiatives, including the United Nations’ Millennium Development Goals.

Progress is not only definable, but also measurable.

Progress is not only definable, but also measurable. In 75 charts, Pinker documents such global trends as increasing life expectancy, declining child and maternal mortality, increased consumption of calories and declining recurrence of famines, increasing income per person and reduction of extreme poverty, decreasing pollution and deforestation, and the continuing march of democracy and human rights. He notes that child labor is in retreat and literacy at an all-time high. People work fewer hours than they used to and spend more time on leisure and in retirement.

Revisiting Better Angels, Pinker points to the continued decline in international conflicts, deaths on the battlefield, and genocides. Homicides are down and the death penalty is on its way out. There are fewer vehicular and pedestrian deaths, as well as fewer plane crashes. Deaths from falls, fires, drownings, poisonings, occupational accidents, natural disasters, and even lightning — all down. Racist, sexist and homophobic attitudes are in retreat. Globally, people are becoming more liberal — at least in the classical sense.

Being a psychologist, Pinker discusses the reasons for our persistent pessimism. As I wrote previously, Pinker’s explanations include:

Pinker’s is an 18th-century understanding of progress. He believes, along with Hume, Kant, Montesquieu, and Adam Smith, that people can gradually improve their lot through the application of reason and science. The Enlightenment view of progress should not be confused “with the 19th-century romantic belief in mystical forces, laws, dialectics, struggles, unfoldings, destinies, ages of men, and evolutionary forces that propel mankind ever upward toward utopia.”

A Better Life Through Reason

Utopia, as the 20th century taught us, will always be beyond humanity’s reach. The best we can do is to make every day better than the day before. Will we succeed? Progress, after all, is neither certain nor irreversible.

The values of the Enlightenment are under assault from the far Left and the far Right.

To be sure, many challenges, including the robotics revolution, artificial intelligence, cyberterrorism, and deadly superbugs, lurk ahead. Pinker uses his considerable intellect to put those problems in perspective. Yes, terrorists can get lucky and kill thousands of people. Yes, an outbreak of a deadly virus could kill tens of thousands.

But these are not existential threats! Nuclear war, in contrast, would almost certainly result in the destruction of our species. Then again, consider the following statistic. In 1986, the world had 65,000 nuclear warheads. Today, there are only 10,000. That too is progress.

The danger ahead, then, does not lie in a specific and supposedly unsolvable problem. As history shows, humanity is capable of addressing great challenges — over time. The danger lies in turning our backs on the means by which problems can be solved — reason, science, open discourse, thirst for knowledge, etc.

The values of the Enlightenment are under assault from the far Left and the far Right. Both extremes believe that our world has been corrupted beyond repair. They want to blow it up and start anew. “What,” they ask us, “do you have to lose?”

"A lot, actually," should be our response.

Marian L. Tupy is the editor of HumanProgress.org and a senior policy analyst at the Center for Global Liberty and Prosperity.