ValueWalk
Home Business Guides Which Cities Give you The Best Bang For Your Buck On Airbnb... 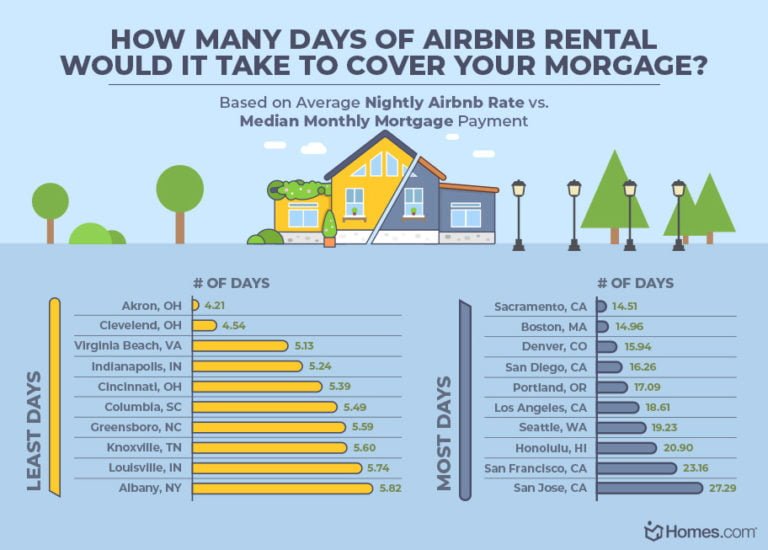 Airbnb rentals may seem like a simple method for making money, but the finances aren’t as simple as the list price renters see online. The cost of owning the home must be factored in when considering the potential for profit. As it turns out, median mortgage prices vary by city as much as Airbnb prices do — but they don’t always follow the same trend.

A new analysis from Homes.com reveals which cities provide the best profit potential from Airbnb rentals. In this date study, the median mortgage payment was compared to the average nightly Airbnb earnings for each city in two ways. First, the number of rental days needed to cover a monthly mortgage payment was calculated. As shown in the graphic, Akron OH ranked best for this metric at only 4.21 days within a month. San Jose CA came in last, requiring a full 27.29 days of renting to cover the average mortgage. The Bay Area in general clearly is not the best place to make money on Airbnb — San Francisco was ranked second worst at 23.16 days. Of all cities, 9.7 is the average number of days required.

Additionally, the analysis included a ranking of cities based on the average daily profit rate. This was done by finding the difference between the average daily Airbnb earnings and the daily equivalent of the median mortgage payment. The city with the greatest margin turned out to be Virginia Beach VA at $183.33. Unsurprisingly, San Jose CA ranked again as the worst city, with a measly $19.55 daily profit margin. One interesting finding from these results is how many of the bottom-ranked cities are in the West, while many of the top-ranked cities are in the South or just north of it. 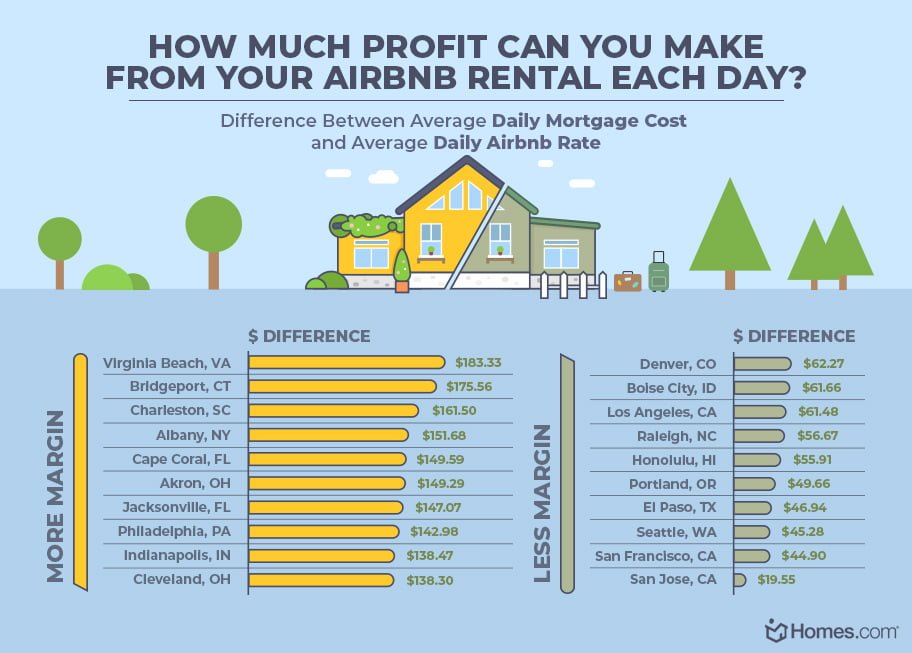 For the sake of being thorough, this data study also looked at the the nightly earnings, alone, for every city. Just as the other rankings do, this takes into account the host fee that Airbnb charges to those renting their homes. Interestingly, San Jose ended up as the third best city in terms of rental revenue, with average daily earnings of $216.31. Many southern cities appeared instead in the bottom 10 for this analysis. In fact, El Paso TX landed in last place with only $72.75 in average daily revenue. The average for all cities is $145.71.

You can sign up to host here (affiliate link)!