ValueWalk
Home Business The Long Weaving Road For The Chicago Stock Exchange Comes To An...

The weaving path of the Chicago Stock Exchange and its quest to be a significant player in the US seems to have finally ended. The “minuscule” exchange had less than 1% of daily stock trading volume but big plans that involved Chinese investors, creating a high-frequency trading “speed bump” and working as a funding vehicle for Chinese companies looking to list in the US publicly.

The on-again, off-again deal for a group of Chinese investors to revitalize the Chicago Stock Exchange has effectively ended. The US Securities & Exchange Commission said it ran into transparency issues with the proposed Chinese owners and the ultimate beneficial ownership of the exchange.

After having received an approval recommendation from SEC staff, commissioners in August said they wanted to review the sale, echoing concerns raised in Congress.

At the center of the controversy were two investors and a cloud of obfuscated financial ties. Chongqing Longshang Decoration Co, a firm that Bloomberg described as offering “interior decoration services,” suddenly decided it wanted to integrate a stock exchange into its product line. They along with Chongqing Jintian Industrial Co. dropped out of the bidding after unclear ownership claims could not be discerned adequately by regulators.

The issue took center stage in 2016 when on the campaign trail President Donald Trump expressed national security concerns over the transaction, a point echoed by members of Congress.

“Simply put, this transaction would expose our markets to new vulnerabilities as a result of potential undue and unnecessary state influence from the Chinese government,” the letter said, pointing to national security concerns. “We see no mitigation steps that can fully insulate the Exchange’s activities and ensure that our nation’s interests are protected, not only in line with the intent of the 1934 Act, but with our broader national security interests, as well.”

While the relatively small size of the Chicago exchange made little difference in the market, concerns over “unknown risks” that could occur from Chinese firms soliciting US investors arose. The Chinese financial system has been accused of being opaque to the point of being a market danger.  Transparency has traditionally been a free market principle upon which exchanges were built, but China’s financial product structure has been questioned for its lack of transparency, with SWAPs transactions not showing who is responsible if the debt agreement defaults, for instance. 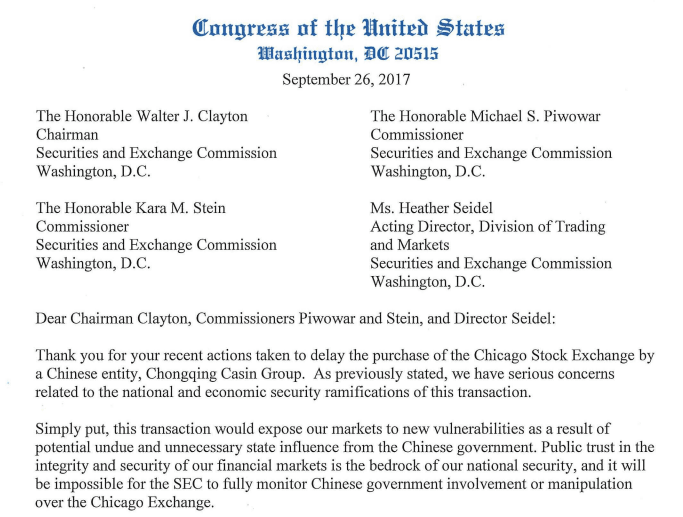 Even after Chongqing Jintian Industrial Co. and Chongqing Longshang Decoration Co. left the consortium, regulatory concerns were not overcome.

The decision leaves a backlog of more than 100 smaller Chinese companies who were waiting at the altar to find US investors, according to to the China Securities Regulatory Commission.

The exchange was planning on offering securities in smaller companies based on the Jumpstart Our Business Startups Act. Congress passed the 2012 US law with the intention to make it easier for smaller companies to gain access to financing by selling stock to the public.

In addition to offering Chinese companies access to US investors, the Chicago Stock Exchange planned to launch a “Liquidity Taking Delay,” commonly known as a “speed bump,” that slowed down high frequency traders by 350 microseconds, in line with the IEX Exchange, the renegade stock exchange that was featured in the Michael Lewis book “Flash Boys.”

“I’m not too surprised,” Richard Johnson, an analyst at Greenwich Associates, told Bloomberg. “I thought this deal would always get additional scrutiny. They didn’t need to buy a stock exchange to do that necessarily so that motivation was a little unclear.”