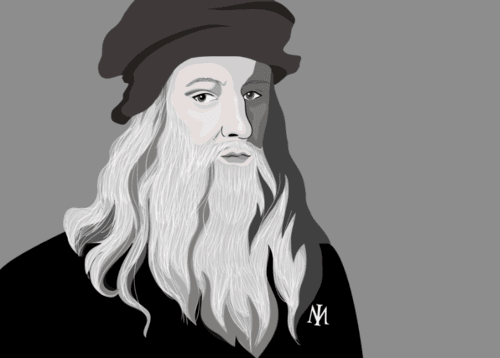 And that’s Da Vinci, not DiCaprio, although I’m sure many believe the latter to be a master of his craft as well. Leonardo Da Vinci has long been recognised as a genius across many modalities, not only in his art. In his life he was also an inventor, philosopher, architect, sculptor, engineer, scientist, astronomer, writer and mathematician, and all of that with little formal education behind him. What drove him to success in all these fields was one simple trait – curiousity.

Charlie Munger has long espoused the benefits of making friends with the eminent dead. He's an avid reader, affectionately characterised by his own children as a 'book with a couple of legs sticking out.' Charlie has spent a lifetime learning lessons from history's storied intellectual powerhouses.

As arguably the greatest Investing Mind of the last century, I've taken a leaf out of Charlie's book and picked up biographies on some of his heroes over the last year including Lee Kuan Yew, Albert Einstein and Charles Darwin. In a similar fashion to the commonalities between the Investment Masters, I've recognised many commonalities that run through the habits, traits and character of these Intellectual Masters.

Having just put down Walter Isaacson's wonderful biography on Albert Einstein, the recent news of the record breaking $450m sale of Leonardo Da Vinci's 'Salvator Mundi' painting prompted me to start Isaacson's latest tome, 'Leonardo Da Vinci'. A truly beautiful book that gave me a momentous appreciation for Da Vinci's ground-breaking discoveries, and allowed me to look at not only his masterpieces such as the Mona Lisa and Salvator Mundi, but nature for that matter, in a completely new light.

Isaacson was drawn to Da Vinci as the ultimate example of the main thematic of his previous biographies, many of which, coincidentally are heroes of Charlie Munger - Einstein, Lincoln and Newton. Isaacson describes that thematic as "How the ability to make connections across disciplines - arts and sciences, humanities and technology - is a key to innovation, imagination, and genius."

What distinguished Leonardo's genius was its universal nature. Like Einstein, Leonardo was better at visualisations than equations. While the world has produced other thinkers who were more profound or logical, and many who were more practical, there have been none as creative in so many different fields. Some people are geniuses in a particular arena, such as Mozart in music and Euler in math, but Leonardo's brilliance spanned multiple disciplines. Leonardo had a profound feel for nature's patterns and cross currents.

Many of histories greatest thinkers draw on diverse disciplines to make creative leaps that lead to innovative breakthroughs. Of all the Investment Masters I've studied, it's Charlie Munger who is the most vocal advocate of developing a mutli-disciplinary mindset.

It was Leonardo's love of learning and his intense, relentless and insatiable curiosity that led to many of his ground-breaking discoveries, inventions and innovations. Many of which were hundreds and hundreds of years ahead of their time and in some cases 500 years!  Isaacson noted that "by allowing himself to be driven by intense curiosity, he got to explore more horizons and see more connections than anyone else of his era."

Leonardo constantly asked why, why, why? He had a child-like sense of wonder. He sought knowledge from others and delved incredibly deeply into subjects and experiments in a quest to find answers. Whether it was answers to the body and movement of water, the mechanics of the human heart and body, the motion of the planets or to discover why birds fly, or how the human eye perceives light and distant images, or why fossils are found on mountains, his quest for knowledge was extraordinary.

Likewise, the Investment Masters are driven by curiosity.

"You want to have a curiosity about business." Warren Buffett

“Curiosity is the engine of civilisation.  If I were to elaborate it would be to say read, read, read and don’t forget to talk to people, really talk, listening with attention and having conversations, on whatever topic, that are an exchange of thoughts. Keep the reading broad, beyond just the professional.” Peter Cundill

“Most of your time being a value investor is as an academic, a researcher, a journalist actually, to have insatiable curiosity and try and figure out how just about everything works. Because in investing the more you know the better off you are.” Li Lu

"A few major opportunities, clearly recognisable as such, will usually come to one who continuously searches and waits, with a curious mind, loving diagnosis involving multiple variables." Charlie Munger

Isaacson noted Da Vinci's "willingness to challenge received wisdom would lead him to craft an empirical approach for understanding nature that foreshadowed the scientific method developed more than century later... His method was rooted in experiment, curiosity, and the ability to marvel at phenomena that the rest of us rarely pause to ponder after we've outgrown our wonder years". Charles Darwin's autobiography similarly noted "I think that I am superior to the common run of men in noticing things which easily escape attention, and in observing them carefully."

Isaacson noted Leonardo's acuteness of his observational skill was not some superpower he possessed. Instead it was a product of his own effort.

Leonardo drew on diverse disciplines seeking to understand and explain natural phenomena.. "Analogies and spotting patterns became for him a rudimentary method of theorizing".

Like Charles Darwin, Leonardo had an instinct for keeping records, "jotting down observations, lists, ideas and sketches came naturally. He had "a lifelong practice of keeping notebooks on a regular basis." From this emerged his creativity ... "His creativity came from his combinatory imagination." Darwin, too, collected information. He explains in his autobiography "I keep thirty to forty large portfolios, in cabinets with labelled shelves, into which I can at once put a detached reference or memorandum. I have bought many books and at their ends I make an index of all the facts that concern my work; or, if the book is not my own, write out a separate abstract, and of such abstracts I have large drawers full."

In a similar fashion, Buffett consumes masses of information, reading 500 pages per day. It is connecting the disparate information that sometimes provides the insight for a successful investment. Buffett explains "Look, my job is essentially just corralling more and more and more facts and information, and occasionally seeing whether that leads to some action."

Leonardo also read widely. Isaacson wrote that "his appetite for soaking up information from books was voracious and wide-ranging." He also collaborated with others to develop his theories and thoughts. Isaacson explains; "Conceiving ideas was for Leonardo, as it has been throughout history for most other cross-disciplinary thinkers, a collaborative endeavour. In his notebook, we find scores of people with whom he wanted to discuss ideas. The process of bouncing around thoughts and jointly formulating ideas was facilitated by hanging around a Renaissance court like the one in Milan."

Leonardo was a seeker of truth. He was not afraid to challenge conventional wisdom and he used observations to formulate general principles and then used those principles to predict outcomes. Da Vinci's curiosity and deep study led to an intuitive feel for nature... "because of his intuitive feel for the unity of nature, his mind and eye and pen darted across disciplines, sensing connections."

And Leonardo was imaginative. Isaacson recognised that "true creativity involves the ability to combine observation with imagination, thereby blurring the border between reality and fantasy." He recognised painting was both an art and a science. To convey three-dimensional objects on a flat surface, the painter needs to understand perspective and optics. Therefore painting is a creation of the intellect as well as the hands. Leonardo advised young artists that "the mind is stimulated to new inventions by obscure things."

In markets, it's often the accumulation and integration of information from varied sources that leads to investment success. One of my favourite investors, the late Leon Levy explains .. "If intelligence is the ability to integrate, creativity is the ability to integrate information from seemingly unconnected sources, and a measure of both abilities is necessary for long term success in markets."

And Leonardo himself recognised the need to take the time to think. Leonardo once explained to a Duke, who was complaining a painting was not progressing, "Men of lofty genius sometimes accomplish the most when they work the least, for their minds are occupied with their ideas and the perfection of their conceptions, to which they afterwards give form."

Like Charles Darwin, Leonardo was not afraid to change his mind when the facts warranted it. Isaacson noted, "he engaged in a dialogue between theories and experience, and when they conflicted he was receptive to trying a new theory. That willingness to surrender preconceptions was a key to his creativity".

I hope you are starting to notice the common traits that manifest themselves across history's Intellectual and Investment Masters. Each was not afraid to question conventional wisdom, to remain open-minded, to adopt a child-like curiosity, to work hard, to seek wisdom from other disciplines, to learn from others, to challenge ideas and to be willing to admit and learn from mistakes.

We can all learn from Leonardo. As Isaacson observed "Leonardo's genius was a human one, wrought by his own will and ambition. It did not come from being the divine recipient, like Newton or Einstein, of a mind with so much processing power that we mere mortals cannot fathom. Leonardo had almost no schooling and could barely read Latin or do long division. His genius was of a type we can understand, even take lessons from. It was based on skills we can aspire to improve ourselves, such as curiosity and intense observation."

While you or I will never paint a Mona Lisa, we can look to Leonardo to help us see the world more clearly and reignite that sense of wonder we all had in our childhood years. We should never stop learning and we should never stop asking why. The word 'why' is one of the most powerful words to have in your vocabulary. Without it, and without its use, we will stagnate, believing we understand all, and that is quite simply absurd when you think about it. Even the greats still ask why, and if they can do it, so should we. And if we do it well, we might even crack the Da Vinci code...