Cargill risk model: supporting decision-making in trading, through analysis and supervision of objectives, while endeavoring to secure the value of transactions

Traders like Glencore build desks to profit from perceived anomalies and lately, they have started to see risk-arbitrage in finance.

Throughout the years, I have been one of the few analysts particularly vocal on Glencore International AG and Ivan Glasenberg.

The Post-2015 Glencore is a bizarre re-run of the Glasenberg’s M&A school.

Most of the deals introduced by Glencore aren’t executed on the premise of a physical market imbalance, it is rather taking size and purely engaging into an interest rate arbitrage between credit and trade finance. Jacques, S and Simondet, A. (2016).

Banks structurers, placers and arrangers with Glencore are targeting the unsecured transactions.

Glencore claims deals are ring-fenced but today its risk profile is more entrenched into the assets that Glencore acquire rather than in the margins on the commodity that Glencore buys and sells. Negative risk asymmetries are notably found in the Glencore’s hedges, its financial surface and deals with “questionable terms” with embedded risks features not very compelling except maybe for name recognition.

Sanctions represent an obstacle for financing the commodity trade.

It was back in 1983, Rudy Guliani, then U.S Attorney for Southern District of New York, took the associates of Marc Rich  + Co AG to the court.

The two men were also accused of buying oil from Iran after trade with that nation had been declared illegal in response to the Nov. 4, 1979, seizure of American hostages. Marc Rich (who is grandfather today of three entities, MRI, Trafigura and Glencore International AG) and Pinkus Green were indicted by a Federal grand jury.

From this moment, I reckon that stand-by U.S banks involved in the financing of the commodity trade the Morgan Guarantee, Chemical bank, Bank of New York, Chase left the commodity business suddenly deemed as too risky.

Rosneft produces 5 million barrels of oil daily. Before the Glencore-Qatar Investment Authority deal, the state held 69.5% of its shares. After the deal it owned 50%+1. Since 2013 BP owned 19.8% in Rosneft and another 1% is owned by Rosneft management. The balance is traded on the Moscow Stock Exchange and the LSE.

After the collapse of the oil price on the international market that eroded the state revenues, Russian leadership, made the decision to privatize a part of the state assets and channel the money to the state budget. In November 2016 Rosneft borrowed from the Russian Sovereign fund $16.5B to refinance its debt. This is despite Russia pumped and exported more oil than it did the year earlier.

Unable to borrow from banks, Rosneft has signed $29B worth of long-term oil prepay as a surrogate. 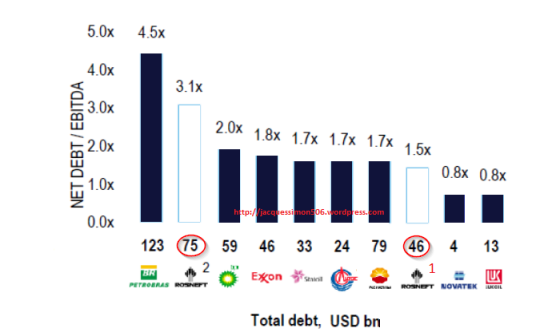 In December of 2016, GLENCORE in partnership with Qatar Investment authority (QIA) took a 19.5% equity stake in Rosneft worth $11.3B, passed banks fees and an earn-out clause with Rosneft gas is $12B.

GLENCORE, QATAR SELL ROSNEFT STAKE TO CHINESE FIRM IN A $9B deal

“Bloomberg) — A closely-held Chinese oil company agreed to buy a minority stake in Rosneft PJSC for about $9.1 billion, CEFC will buy a 14.16 percent stake in Rosneft from a joint venture between Glencore and the Qatar Investment Authority for about $9.1 billion. In turn, Glencore and Qatar will use the proceeds to pay down the debt they contracted to buy their initial stake just nine months ago, said a person familiar with the deal. Glencore will retain a 0.5 percent stake and Qatar a 4.7 percent stake”.

Sanctions on Russia seem to have specially targeted Glencore PLC-

In July 2016, H.R.3364 – Countering America’s Adversaries Through Sanctions Act was introduced by the U.S Congress and since August 2 the bill became a public law.

SEC. 233. SANCTIONS WITH RESPECT TO INVESTMENT IN OR FACILITATION OF PRIVATIZATION OF STATE-OWNED ASSETS BY THE RUSSIAN FEDERATION.

(a) In General.—The President shall impose five or more of the sanctions described in section 235 if the President determines that a person, with actual knowledge, on or after the date of the enactment of this Act, makes an investment of $10,000,000 or more (or any combination of investments of not less than $1,000,000 each, which in the aggregate equals or exceeds $10,000,000 in any 12-month period), or facilitates such an investment, if the investment directly and significantly contributes to the ability of the Russian Federation to privatize state-owned assets in a manner that unjustly benefits.

The loan made by Intesa backing the Qatar-Glencore-Rosneft transaction had a totally different substance than the simple refinancing of an oil company- It was an in-kind bail-out of the Russian government budget.

Sanctions  have therefore nullified any syndication effort by Intesa to offload a $5.5B exposure.

The Italian bank and the Russian Banks (undisclosed) funding the deal, might just had avoided a near-miss. Thanks to one typical clause in a structured credit, parties can exit the transaction:

Prepayment.
This clause covers the case of early voluntary repayment by the borrower and the case of prepayment desired by the creditors (e.g in the event that it becomes impossible for a creditor to continue its participation in a loan, ex: sanction, jurisdiction, etc.)

The structure of fees in a syndicated loan also provides a penalty for prepayment (for the account of the borrower) Glencore International AG/QIA).

From now, expect Rosneft and its subsidiary Rosneft Trading S.A, to act totally irrationally. It’s survival of the fittest.

It’s a $75B indebted company whose debt service requirements induce  a continued physical production of oil to maintain cash flows, delaying the reduction in supply in the market increasing the risk of a liquidity shortfall and thus self-fulfilling its own demise.

Rosneft, the entity, is a second-order priority in Russia’s 10 centuries civilisation.

The worst case scenario is that Americans bleed them to blood, they have to nationalize the rest of it and restart under another name.

The rapidly developing geopolitical landscape is creating more sudden and unintended consequences. I speak with imagery here: the people on the ship sinking are thinking who they can eat next. Lukoil-Litasco S.A might be the next chip…

Like Rosneft, the Baar, Switzerland-trader, has its own non-GAAP adjusted earnings problems.

We will be told that Glencore-QIA are slightly even on the equity stake sale to CEFC and but:

Glencore plc balance-sheet doesn’t emerge as a winner of this. The Baar-Swizerland company has lost $5.3B of fully ring fenced balance-sheet assets that it had acquired in a limited liability structure with QIA at a cost of $313M.

I could be wrong and Ivan Glasenberg has deliberately assisted the Russian Federation Government in its In-kind bailout through Rosneft with Intesa  ?*