ValueWalk
Home Book Reviews Hit Makers: The Science of Popularity in an Age of Distraction

A video goes viral—or does it? Why did a handful of girls’ first names remain popular across generations and then “cycle in and out of popularity faster than summer dress styles”? Why was the phenomenal success of “Rock Around the Clock” (by some counts second only to Bing Crosby’s “White Christmas”) such a fluke?

Derek Thompson, a senior editor at The Atlantic, tackles these and a host of other intriguing questions in Hit Makers: Why Things Become Popular (Penguin Press, 2017). His book has two core themes: the secret to making products that people like and the reasons that some products fail while similar ideas catch on and become massive hits. Addressing these themes, he tells refreshingly new stories. And he offers explanations, occasionally in the form of models but, especially in the case of the greatest hits, often closer to “magic sprinkle dust.”

I’m about to do a great disservice to Thompson’s book by focusing on two models. The first comes from a professor of marketing who describes the entertainment business as “a complex, adaptive, semi-chaotic industry with Bose-Einstein distribution dynamics and Pareto power law characteristics with dual-sided uncertainty.” Sounds pretty similar to the financial markets, doesn’t it?

For those not familiar with Bose-Einstein distribution dynamics, it essentially says that “gas molecules in sealed containers would aggressively cluster at a time and place that was impossible to predict with certainty.” As a metaphor for pop culture, it says that “at some point in time, [consumers] will cluster around an unforeseeable cultural product by buying the same book or attending the same movie.” As for dual-sided uncertainty, in this case applied to films, “Hollywood is in the business of predicting what audiences want many years in the future, even though most people couldn’t say for sure [what they want], even if you asked them.”

The second model is one Thompson sets out to destroy as myth: ideas going viral. In epidemiology a viral disease “has the potential to spread exponentially. One person infects two. Two infect four. Four infect eight. And before long, it’s a pandemic.” Ideas, by contrast, do not go viral. Ideas achieve massive popularity primarily through broadcast diffusion—“many people getting information from one source.” Essentially, “one Facebook post, one favorable spot on the Drudge Report, or one well-watched segment on Fox News reaches thousands and thousands of people instantaneously, and then a small fraction of that … group passes it along again.” The better model looks something like this: 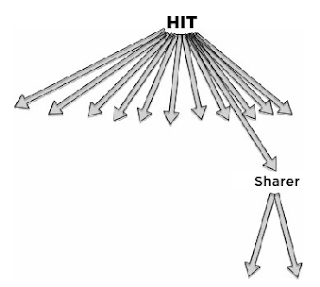 I must admit that after I requested a digital copy of this book on NetGalley I had second thoughts. Did I really care what made a best seller or a #1 song? Thompson convinced me that, yes, I did. So, even though this blog doesn’t exactly have the impact of a major media outlet, I can perhaps play a role in broadcasting that Hit Makers: Why Things Become Popular  is a great book.