Hottest links for Thursday 5th December, the late edition (see Wednesday’s edition of hottest links). Get our free daily newsletter (which HAS BEEN RECENTLY UPDATED) and never miss a single linkfest. Also, now if you sign up you will get our new e-book on value investing.

Top stories for today are included below.  Today, we’ve got a somewhat concerning look (well, not if you’re a business owner) at how US wages as a percentage of corporate profits are at their lowest point since World War II, an essay on the inefficiency of gift-giving just in time for the holiday season, and an excellent Ben Graham piece on why sometimes size does matter.

Peter Lynch authored three books on investment along with John Rothchild. These books ‘One Up On Wall Street’, ‘Beating the Street’ and ‘Learn to Earn’; the first two books were phenomenal pieces of work, and best sellers. [ValueWalk]

The Economic Inefficiency of Gift Giving

From Michael Sandel’s What Money Can’t Buy: The Moral Limits of Markets. Joel Waldfogel, an economist at the University of Pennsylvania, has taken up the economic inefficiency of gift giving as a personal cause. By “inefficiency,” he means the gap between the value to you (maybe very little) of the $120 argyle sweater your aunt gave you for your birthday, and the value of what you would have bought (an iPod, say) had she given you the cash. [Shane Parrish, Farnam Street]

Not All Buy Backs are Equal

I first read about share buybacks when plowing through one of Peter Lynch’s classic books. Since then, share buybacks has always been one of the top things I look for when assessing the investment merits of a stock. [Jae Jun, Old School Value, Valuewalk]

Charlie Munger once said that he compares every possible investment to Wells Fargo & Co (NYSE:WFC)… Why buy company X if it’s not as good/cheap as WFC? [John Huber, ValueWalk]

I’ve been publishing CAPE updates for countries quarterly on The Idea Farm, and below I highlight a blurb from our upcoming year end outlook. [Mebane Faber]

Wages as a percent of US corporate profits lowest since WWII. [Jesse, Jesse’s Crossroads cafe] 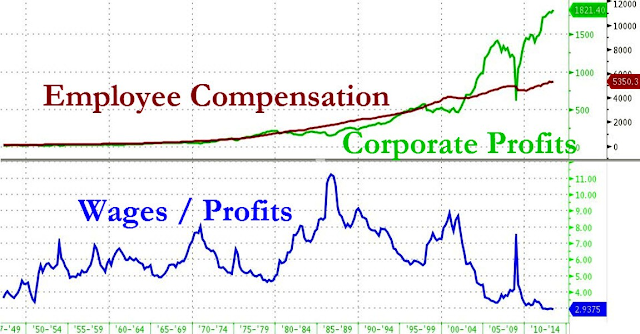 Hedge funds and other partnerships are expected to pay nearly £2bn more in tax over the next five years, as part of a £9b.. [Vanessa Houlder, FT]

As the PIMCO Total Return Fund lost its title as the world’s largest bond fund to Vanguard last month, its Founder and co-CIO Bill Gross stated he has a plan for a comeback. [Sage Um, aiCIO]

The prospect of revitalized oil production in Iraq and Iran may add to tensions between those two countries and Saudi Arabia over export quotas. [Stratfor, ValueWalk]

The answer for U.S. regulation is more or less “bankers, with some oversight by regulators”: Big banks will be able to use what is called the “Advanced Internal Ratings-Based approach” to assess how risky their loans are, and that assessment feeds into how much capital they need to hold against their loans. [Matt Levine, Bloomberg]

For a recent decision of the Second Circuit has allowed investors to proceed in their direct securities fraud lawsuit against PricewaterhouseCoopers, the auditor of hedge fund Lipper Convertibles. In this context, a direct lawsuit is one that is not derivative, and this decision could amount to a significant expansion of the litigation exposure of auditors. [Christopher Faille, AllAboutAlpha.com]

A young Edmonton man who grievously wounded his friend while testing a supposedly “stab-proof” vest was sentenced to six months in jail Tuesday. [Ryan Cormier, EdmontonJournal]