ValueWalk
Home Business Hottest Links: The Wall Of Worry, Charlatan Of The Year, And JCP...

Hottest links for Wednesday 4th December, the late edition (see Tuesday’s edition of hottest links). Get our free daily newsletter (which HAS BEEN RECENTLY UPDATED) and never miss a single linkfest. Also, now if you sign up you will get our new e-book on value investing.

Top stories for today are included below.  We’ve got some great stories today, including a great way to look at the macro environment, a promotion backfiring on JCP, and of course some classic Warren Buffett on value investing.

The Chief Investment Officer of General Re-New England Asset Management – a company wholly-owned by Warren Buffett’s
Berkshire Hathaway Inc. (NYSE:BRK.A) (NYSE:BRK.B), has issued one of the direst proclamations about the future to date and blasts the Fed’s role in creating the biggest mess in financial history, is truly upside down. [Tyler Durden, ZeroHedge]

Charlie Gasparino Has An Idea

As the world’s foremost business and economics reporter, everyone expects Gasparino to attend the World Economic Forum in Davos, Switzerland. [Bess Levin, DealBreaker]

I was informed that the theses that took me three five posts to present was wrapped up by Matt Levine in one little package two days prior to my attempts. And he does it better, backwards and in heels. Plus, to get the alliteration in the headline I had to mix up the alpha and the beta. [Climateer Investing]

Now, while I am too young to dispel any life-changing advice on “how to be a financial rockstar” or “how to remove all financial worries from you life”, I am happy to share below 10 rules that have changed my life for the better over the past few years, and how these can also benefit anyone who practices them with discipline and integrity. [Vishal Khandelwal, Safal Niveshak]

You can’t deal with ignorance if you can’t recognize its presence. If you’re suffering from primary ignorance it means you probably failed to consider the possibility of being ignorant or you found ways not to see that you were ignorant.  [Shane Parrish, Fanam Street]

We saw this bias in the media over the antics in Washington, D.C., fixating on the threat of a default on U.S. Treasury debt during the debt ceiling discussions, or a return to recession due to the impact of the sequester spending cuts. [Cullen Roche, Pragmatic Capitalism] 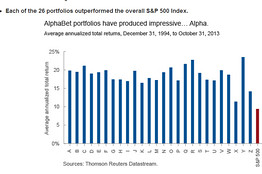 Analyst Estimates And Downgrades: A Look At Nuance

While Thill downgraded his rating of Nuance Communications Inc. (NASDAQ:NUAN) due to the his long-term outlook of the country, Standpoint’s Ronnie Moas looked at the short term indicators, concluding that “the stock is a nice price for good company.” [TipRanks, ValueWalk]

As we continue our special coverage of India, it becomes important to ask the obvious. How are Indian companies doing? For that, we turn to the chief investment officer of SBI Mutual funds, Navneet Munot, CFA. [William Ortel, CFA Institute, ValueWalk]

When insiders of any company pledge their shares for a personal loan, eyebrows are raised, and now NQ Mobile Inc (ADR) (NYSE:NQ) is changing its bylaws make it easier for what some see as a questionable practice. [Michelle Jones, ValueWalk]

The mission of a good investment analyst is to think about the impossible thoughts — or at least the ones that seem improbable to most. The job of a prudent portfolio manager is to anticipate problems in the face of increasing momentum. [A. Michael Lipper, CFA Institute, ValueWalk]

The package, to be approved by Prime Minister Shinzo Abe’s government on Thursday, will be worth 18.6 trillion yen ($181.6 billion), the sources told Reuters on condition of anonymity. [William Mallard, Reuters]

A typical US corporate pension plans’ funded ratio improved to 93% as of end of November, a record high since October 2008 and up 19% year-to-date, according to Mercer. [Sage Um, aiCIO]

Kyle Bass On Potential War Between Japan And China

Kyle Bass lived in relative obscurity until 2007, when he burst on the global hedge fund scene with a huge bet on subprime mortgages. Some might argue that outsized bets befit his Texan origins. But everything Bass does seems larger than life and goes against the conventional tide. [ValueWalk]

As with CIOs, the typical CEO’s compensation dropped compared with last year, although it still amounted to a comfortable $2.28 million. Portfolio managers came in just behind CEOs as the third-best paid employee,s with average earnings of $2.27 million. [Leanna Orr, aiCIO]

U.S. and European Regulators have prescribed notably different remedies to help their economies recover. With Europe finally on the mend, perhaps, a region that had neem a feeding ground mainly for credit and distressed hedge funds is looking increasingly attractive to long-short equity managers. [Imogen Rose-Smith, Institutional Investor]

The Ultimate Guide To Value A Stock

Suppose temperament wise, you have all that it takes to be a sound investor. You can wait decades without selling, can remain uninfluenced by market noise, even have the required skills to determine whether the company is fundamentally strong. [Sumit Sinha]

Charlatan of the Year

Who should win the 2013 “Charlatan of the Year” award in the category of finance? #FCOTY [Survey Money]

On November 15, 2013, the U.S. Supreme Court granted certiorari in the case of Halliburton Company (NYSE:HAL) v. Erica P. John Fund, Inc., No. 13-317, raising the prospect that the Court will overrule or significantly limit the legal presumption that each member of a securities fraud class action relied on the statements challenged as fraudulent in the lawsuit. [Noam Noked, Law.Hardvard.edu]

Shortly after the J.C. Penney Company, Inc. (NYSE:JCP) press release hit last night on how its post-Thanksgiving weekend sales were up 10% I tweeted: “JCP big comps for the holiday weekend but… against what? [Herb Greenberg, The Street]