Borrowers want capital, but they get money–newly created credit money.More credit money has been issued by the banking system than savers have deposited (“fiduciary media”). Those participants in the economy who suffer losses due to price changes were not parties to the original credit transactions. They are participants in the economy who receive the new money late in the process, after prices have been bid up by the credit money.  –Mises (so much for the harmless actions of the Fed)

What Happens When You Buy Quality: October_Quest_2013

CAPITULATION IN THE MINERS

When I use the word capitulation it implies an ending to the bear market in precious metal equities, however NOTHING is certain in markets. I know not all public gold stocks will go to zero. Eventually, the laws of supply and demand assert themselves and you can only buy assets super cheap if sentiment is SUPER bearish. I think in June, gold stock made a FEAR bottom while today they are going through despair selling. People see no hope so why own. Volume is relatively low and the selling persistent–day after day.

The above chart shows the sell-off from new highs over the past 90 years in the BGMI, the Barron’s Gold Mining Index). Currently, 2013 shows about a 63% loss or in the range of the past 10 bear markets. 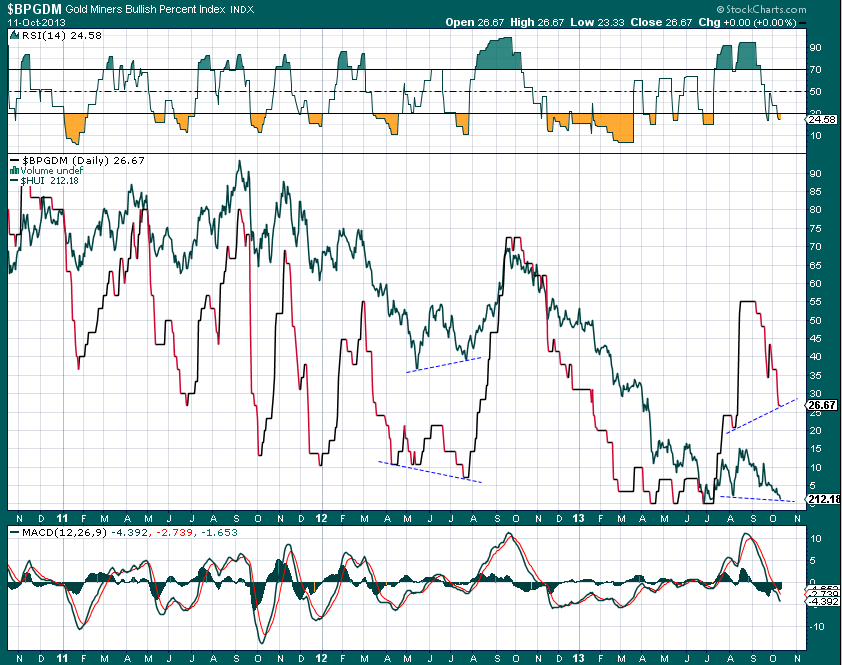 The low relative volume, the historical depth of the sell-off and the demarcation of price movement between high quality (RGLD, FNV, SLW) and low quality gold stocks (NEM, GLDX) as the chart above shows, leads me to believe that we are closer to the end  of the decline.

We continue to get one ‘do or die’ moment after another in the charts of gold and gold-related instruments. So far, the outcomes have obviously been bearish every time since the 2011 peak, but at some point that is bound to change, as the fundamental backdrop continues to be gold-friendly (note that not every aspect of the fundamental backdrop is – for instance, the declining federal deficit is probably viewed as a negative by market participants). Often it is precisely at those times when nothing seems capable of turning a market around that surprise changes in trend can and do occur.

Note that gold sentiment remains absolutely dismal. Recently Mark Hulbert’s HGNSI (gold newsletter writer sentiment index) stood at minus 20 (meaning gold timers recommended a 20% net short position on average), while the daily sentiment index among gold futures traders (DSI) stood at 9 (all time low: 5).  Bearish sentiment in the sector rarely becomes as extreme as it is at the moment. Of course it has been quite negative for some time now, but the current readings are rather extreme even so.

A major reason why we continue to maintain that the fundamental backdrop remains gold-friendly even though the price action suggests a bear market is still in progress, is that we believe that mainstream analysts are quite mistaken when they assert that it is back to ‘business as usual’ in the economy. It clearly isn’t.

History is being made today!

Of course, if you believe QE will lead to sustainable growth without monetary mayhem then stay away from anything to do with gold.