Navistar International Corp (NYSE:NAV), the Lisle, Illinois commercial truck maker, saw its shares rise on Friday by over 16 percent, and continue to rise Monday, on news that Carl Icahn had increased his stake in the beleaguered company. The activist investor increased his holdings from 10 percent to 12 percent, despite a previous failed attempt to force a merger at Navistar. 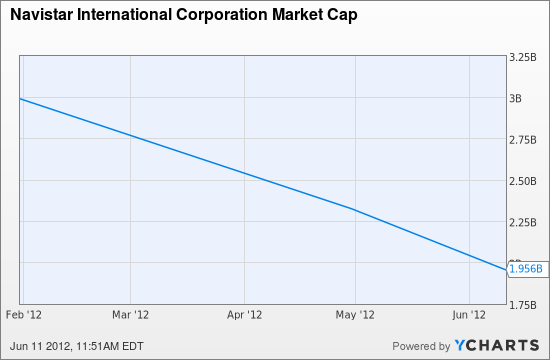 Last year, Icahn appeared ready launch a proxy fight in order to force Navistar to merge with truck maker Oshkosh Corporation (NYSE:OSK). He was thwarted however when Navistar adopted a number of takeover defenses, including a poison pill provision and staggered director terms. These provisions should expire in time for Icahn to launch another proxy battle at the next annual meeting in February if he was to choose to do so.

Some analysts however believe that Oshkosh is no longer a likely target for a merger, and instead Icahn may seek to force Navistar to merge with a European truck maker that is seeking American market exposure. Potential candidates would include Volkswagen AG (PINK:VLKPY) and Fiat Industrial SPA (PINK:FNDSF). In exchange, Navistar would be looking to increase European market exposure, which it currently had very little as its international operations are focused on emerging markets such as China, Brazil and India. Seeking European exposure at a time of great uncertainty about the economic outlook in that market will prove to be controversial for some investors.

Navistar has struggled to produce returns for shareholders in its current form, posting two consecutive quarterly losses amid falling market share. Its North American market position has declined from a quarter of the market to only 18 percent of the market in 2011 as buyers are unwilling to commit to Navistar’s product line under Environmental Protection Agency guidelines become more clear. This resulted in a $172 million loss in the second quarter of 2012, followed by a cut in the 2012 overall profit forecast.