A disappointing nonfarm payrolls report came. If the Fed postpones the tapering announcement considerably, gold might be able to rally for longer.

They say that September is a good time for gold. Indeed, historically, gold used to shine during the ninth month, and the yellow metal also started this year’s September on a good note. As the chart below shows, it jumped above $1,800 on the last day of August, and it has continued its rebound since then. 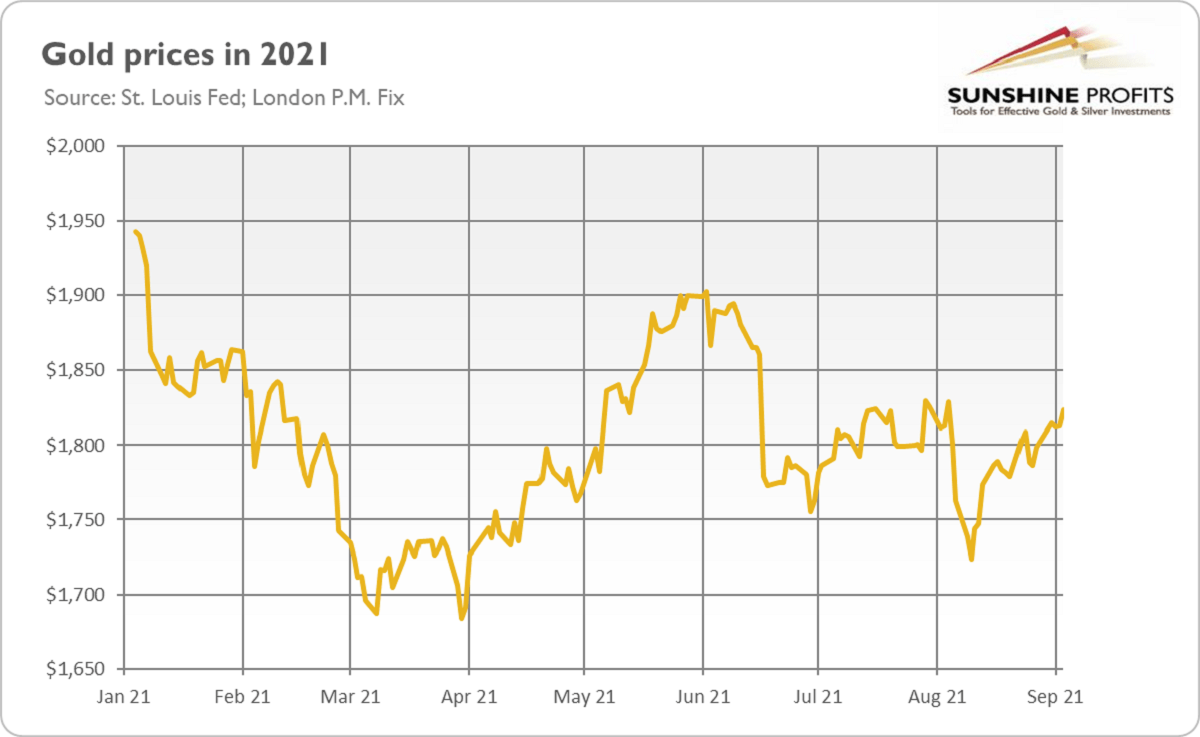 So, what happened? Well, on Friday, the newest report on the US labor market was revealed. The publication showed that the American economy added only 235,000 jobs in August, as one can see in the chart below. The number came much below expectations (of more than 700,000) and much below the impressive gains in July (above one million, after an upward revision). It was also the worst report since January 2021. 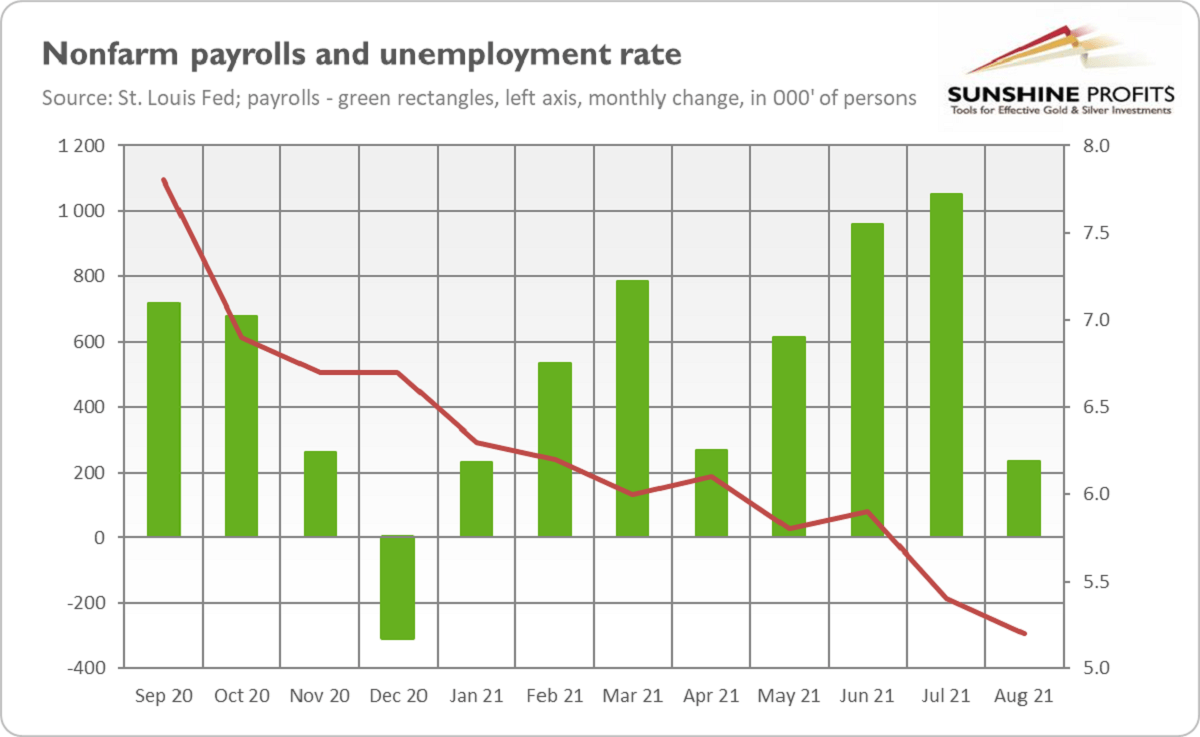 To be clear, the Bureau of Labor Statistics Employment Situation Report included some positive news as well. For instance, the unemployment rate declined from 5.4% to 5.2%, as the chart above shows. Additionally, it turned out that employment in June and July combined was 134,000 higher than previously reported. However, these strong revisions are not enough to outweigh the disappointing nonfarm payrolls.

What does the fresh report on the US job market imply for the gold market? Well, the slowdown in employment growth lowers the odds that the FOMC will announce the timeline of its tightening cycle this month. Before the employment report was published, many analysts bet that the Fed would present a plan of tapering of its asset purchases as early as at the September meeting. Now it’s not so clear, as it seems that the spread of the Delta variant of the coronavirus weighs on the economic activity. And, as a reminder, the Fed focuses now more on its employment mandate rather than the price stability. Weak payrolls mean that the shortfall from full employment will be eliminated later than previously anticipated.

It goes without saying that a more dovish Fed is positive for gold prices, as the postponement of normalization of the US monetary policy provides relief for the yellow metal. The prospects of the tightening cycle were creating downward pressure on gold earlier this year.

Another hidden positive factor for the gold market is the stagflationary character of the recent employment report. You see, job growth slowed down while wage inflation accelerated. According to the BLS, wages jumped 0.6% in August, up from a 0.4% increase in July. Indeed, we have inflation above 5%, while the economy is slowing down despite all the monetary and fiscal stimulus it got. It doesn’t sound good, does it? Given the size of monetary and fiscal injections, the economy should be booming, but it’s far from doing so. Well, prices are booming, but the economic activity is far from being spectacular right now.

The bottom line is that the August nonfarm payrolls might be, in a sense, a game-changer for the gold market. To be clear, the Fed won’t drop its plans to tighten monetary policy entirely (especially that August nonfarm number often disappoints initially), but it may postpone the beginning of tapering and reduce its asset purchases even more gradually than it was previously thought.

However, they can still announce tapering this year. Another caveat is that gold failed to rally above $1,835, despite the softened expectations of the future path of the federal funds rate. But it seems that gold bulls can enjoy the ride – at least for a while – until some hawkish comments from the Fed rattle markets again. One thing is sure: a long quiet summer has ended and a more windy fall has started. The upcoming FOMC minutes should provide some clues as to whether or not gold will face more headwinds or tailwinds later this year.