According to S&P Global Market Intelligence estimates, fintech companies in the U.S. attracted nearly $7.5 billion in venture capital funding in the second quarter of 2021 across 194 transactions, representing a nearly 70% increase year over year.

Companies operating in the payment space drew in the most capital among the six sectors covered by Market Intelligence. Unsurprisingly, the sector also saw the most deals of at least $100 million in size, including the largest deal of the quarter, a $440 million infusion into Circle Internet Financial Inc. Banking technology companies raked in the second-most with Plaid Inc. attracting the most funding in the space, showing continued signs of strength after its acquisition by Visa Inc. was terminated.

The largest transactions continue to drive most of the funding. Out of the 194 total transactions, 27 had deal values of at least $100 million. These accounted for nearly two-thirds of all funding in the quarter. The 10 largest deals accounted for 39% of the quarter's funding. 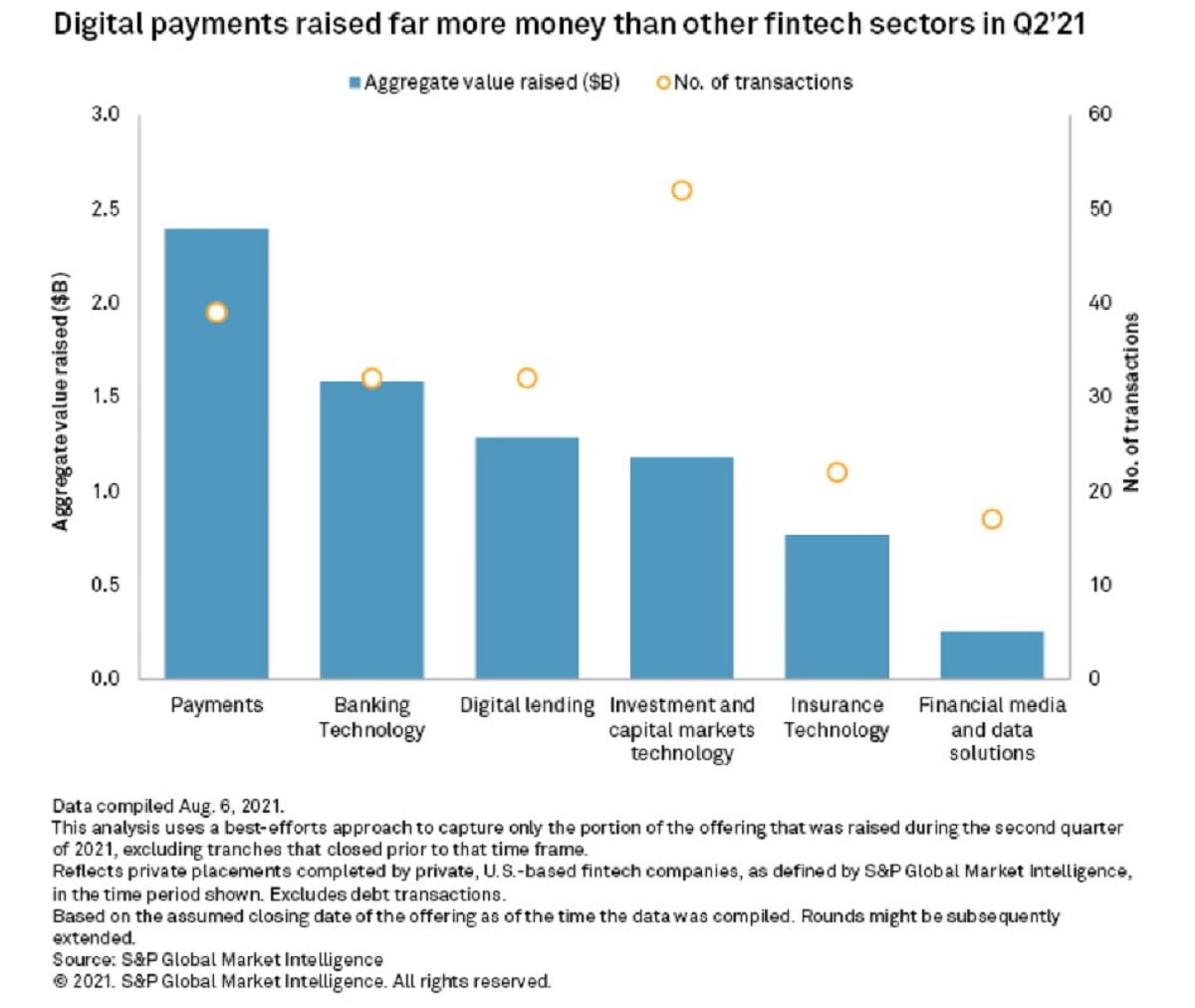 Payment companies raised $2.4 billion in the quarter. Spread across 39 transactions, the average check size into the sector was by far the highest among the six sectors covered.

Funding into the sector was bolstered by several high-profile, large-size deals; eight were valued at $100 million or more. Circle, which had the aforementioned largest deal in the quarter, plans to use the $440 million it raised to finance growth and market expansion. The company is the creator of USDC, a prominent stablecoin that is fully backed by U.S. dollar reserves. The utility of USDC, which leverages the Ethereum blockchain for processing transactions, is the ability to make dollar-denominated payments over the internet to any recipient with a supporting cryptocurrency wallet. There were 27.3 billion USDC in circulation and the stablecoin had facilitated $1 trillion in transactions as of Aug. 30, according to the company website.

A broader look at the payments-related companies that saw significant deals reveals a healthy variety of business models receiving funding. Brex Inc., the business-to-business finance company aimed at startups raised $425 million. The company has expanded beyond its initial niche offering business credit cards to offer a wider range of services to their business clientele including a business deposit account and financial management tools. ReCharge Inc. runs a platform that enables e-commerce merchants to develop subscription payment programs for physical goods. The company raised $227 million from a group of venture capitalists in May. SpotOn Transact LLC raised $125 million for its payment platform designed for the restaurant industry. The company offers a suite of payment tools including tools that facilitate online ordering.

Though the business models appear varied, they have all likely benefited from the consumer shift towards digital channels. According to a 451 Research survey conducted in January 2021, 72% of consumers shifted some of their spending online as a result of the pandemic, with 11% claiming to have shifted all of their spending to digital channels. Changing consumer behavior points to a future where digital payments claim a greater share of transaction activity, a tailwind for any company that facilitates online payments.

Seven of the 10 largest deals were into payments and banking technology-related companies. 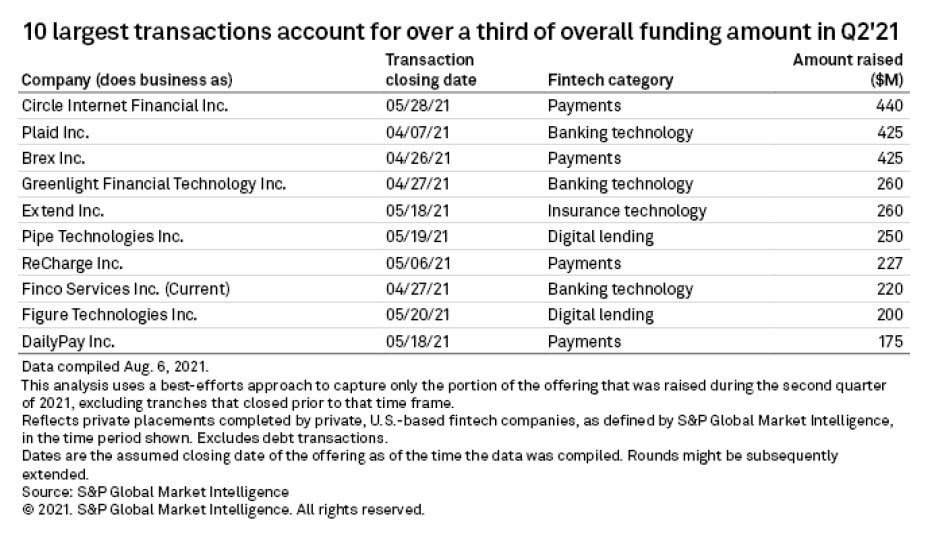 Overall funding grew 69% year over year, and this growth is not off a low base. Aggregate funding into the industry in second-quarter 2020 represented the second-highest quarterly total in that year; funding was not severely suppressed in the spring of 2020 despite uncertainty regarding the COVID-19 pandemic. While the industry did see funding volumes dip in the third quarter, aggregate funding the whole of 2020 was up 20% year over year, according to Market Intelligence estimates.

Therefore, the continued growth in funding this year seems to suggest ongoing investor bullishness in the space, rather than a recovery from an anemic 2020. Through the first half of 2021, the industry has already amassed approximately 50% more private funding relative to the first half of 2020, even after excluding Robinhood Markets Inc.'s $3.4 billion emergency capital raise earlier in the year. 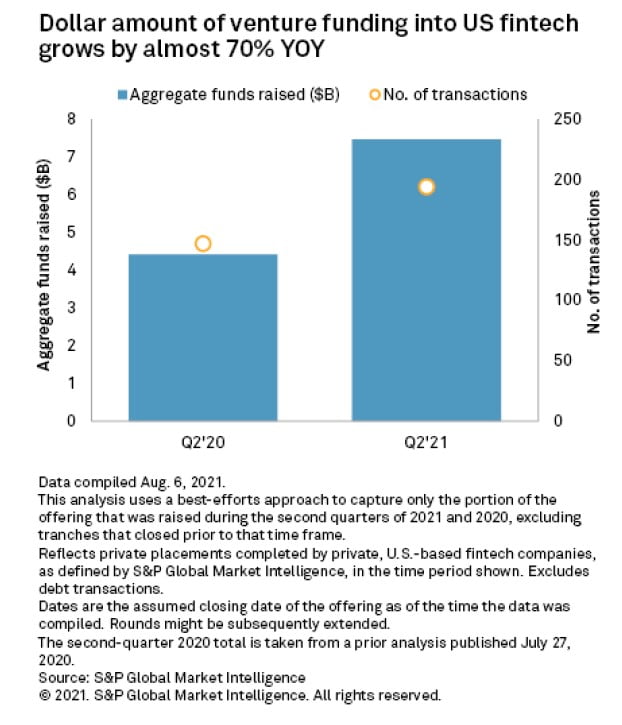 While the private funding markets remain a major source of capital for fintech companies, the industry has started to tap into public markets more aggressively in the past year. Many fintech companies have successfully raised capital via traditional IPO and SPAC deals. While some companies' public stock performance has faltered since their IPO, others have fared well. The continued robustness of private funding markets and the increasing use of public markets for financing indicate investors overall remain highly attracted to the potential of the space.