ValueWalk
Home Business The U.S. EV Credit Will Benefit Competitors Instead Of Tesla

Stanphyl Capital commentary for the month of March 2021, discussing their short postion in Tesla Inc (NASDAQ:TSLA).

The most recent quarter Tesla reported was Q4 2020, and excluding $401 million of pure-profit emission credit sales (an income stream that begins shrinking imminently then likely disappears after 2021 when other automakers have enough EVs of their own) it lost $131 million, nicely summarized in a graphic from @TeslaCharts: 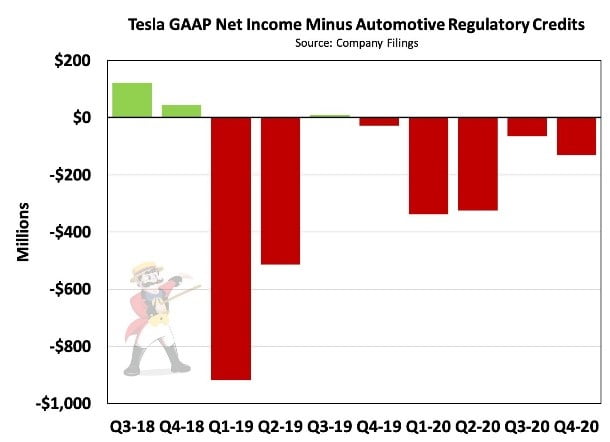 (And for those who think Tesla is really “an energy company” not “a car company,” the energy division had a negative gross margin.)

The Most Competitive EV Region

Meanwhile the most competitive EV region in the world (and a bellwether for what will soon happen in Asia and then North America) is Europe, and due purely to new competition Tesla’s sales there have stopped growing while its EV market share has dropped from over 30% to just an estimated 10%. Courtesy of Twitter user @fly4dat, here’s a great chart showing that: 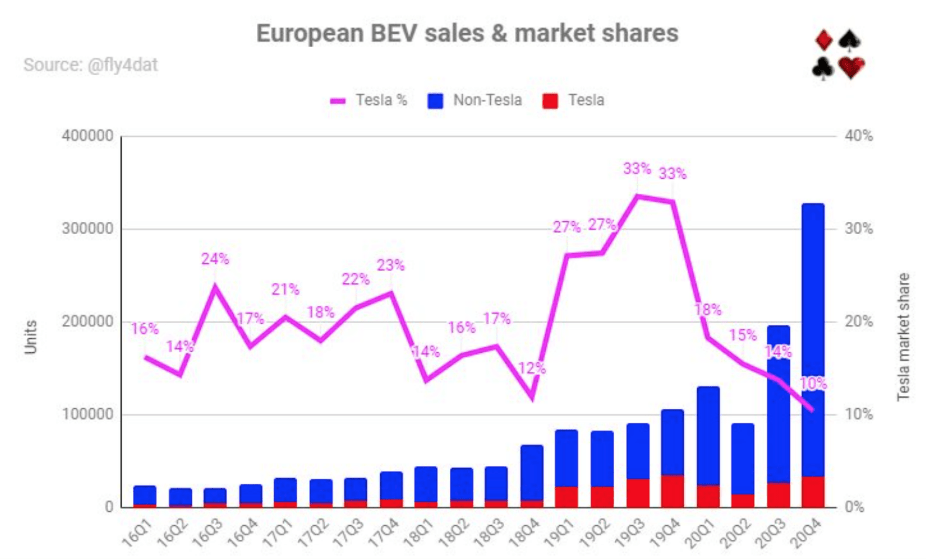 And contrary to what bullish Teslemmings may tell you, Tesla sales are nowhere near being “production constrained,” as Tesla will likely deliver 170,000 to 180,000 cars for Q1 2021 while it claims quarterly production capacity of 262,500:

Nothing is more amusing than seeing this giant stock promotion of a company try to perpetuate the illusion of being “supply constrained” by continuing to add capacity in order to desperately try to maintain an image of “limitless demand” while it continually slashes prices just to utilize far less than its existing capacity. Tesla’s “plan” is now obvious: keep slashing prices to move as much volume as possible while using the world’s most illicitly creative accounting to maintain razor-thin profitability. But what’s the end game? If Tesla stops cutting prices volume will collapse. Tesla is no longer “a growth story”—it’s a nearly-profitless stock (and Bitcoin) promotion for idiots!

And if you think the proposed extension of the U.S. electric car tax credit will be “the savior of the Tesla growth story” I have bad news for you: the most likely version would not be "unlimited"—it would apply to just 400,000 more cars per manufacturer. If that’s the final law, let's say it sells 250,000 additional Teslas that wouldn't have sold without the credit, at $5000 net margin per car: $5000 profit x 250,000 extra sales = $1.25 billion = around $1 billion after-tax = a one-time (i.e., you don't put a PE multiple on it) addition in value of around 90 cents per diluted Tesla share. That's it. The most likely U.S. EV credit extension is worth a total one-time gain of only around 90 cents a share to Tesla. And Bloomberg’s Liam Denning writes about why the credit—regardless of its size—will benefit Tesla’s competitors much more than Tesla.

In China during Q4 (and Europe in Q1 2021) Tesla cut its Model 3 price significantly, enabled by the use of an inferior (in cold-weather performance) LFP battery formulation it now plans to use in the U.S. This price cut drove Chinese sales to over 20,000 cars in both November and December 2020, but despite monthly Chinese production capacity of 37,500 cars and the early 2021 introduction of the Model Y, in January Tesla’s sales of locally made cars in China collapsed back to just 15,484 and in February bounced only slightly to 18,318 (out of a total market of 1.2 million). Meanwhile GM sold around 240,000 and Ford likely sold around 50,000.  In other words, Tesla is just a flea in an elephant-sized market and now, exactly as in Europe, China’s EV competitive landscape is getting vicious.

As for Tesla’s newest “hope,” the Model Y, its quality is awful and it faces current (or imminent) competition from the much better built electric Audi Q4 e-tron, BMW iX3, Mercedes EQA, Volvo XC40 Recharge, Volkswagen ID.4, Ford Mustang Mach E, Nissan Ariya, Hyundai Ioniq 5 and Kia EV6, as well as the less expensive yet excellent all-electric Hyundai Kona and Kia Niro. Meanwhile, Tesla’s Model 3 now has terrific direct “sedan competition” from Volvo’s beautiful new Polestar 2 and the premium version of Volkswagen’s ID.3 (in Europe), and later this year from the BMW i4. 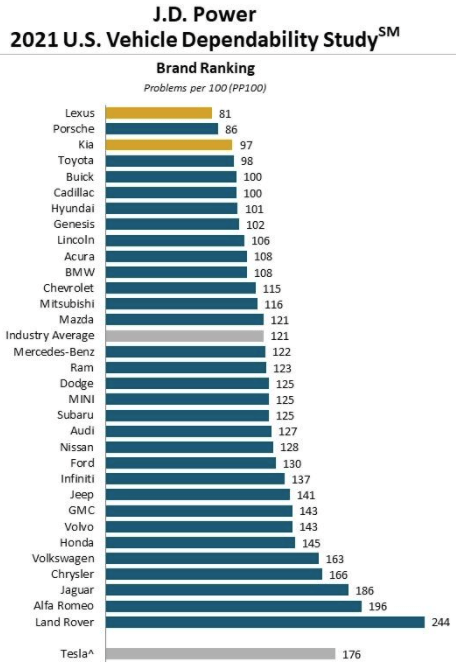 Tesla Has Nothing Proprietary

Regarding safety, the Chinese government recently forced the recall of tens of thousands of Teslas for a dangerous suspension defect the company spent years trying to cover up, and now Tesla has been hit by a class-action lawsuit in the U.S. for the same defect. Tesla also knowingly sold cars that it knew were a fire hazard and did the same with solar systems, and after initially refusing to do so voluntarily, it was recently forced to recall a dangerously defective touchscreen. And of course Tesla continues to sell and lie about its hugely dangerous so-called “Autopilot” system, which Consumer Reports has completely eviscerated; God only knows how many more people this monstrosity unleashed on public roads will kill, despite the NTSB condemning it as dangerous. In other words, when it comes to the safety of customers and innocent bystanders, Tesla is truly one of the most vile companies on Earth. Meanwhile the number of lawsuits of all types against the company continues to escalate, including one proving blatant fraud by Musk in the SolarCity buyout. (If you want to be really entertained, read his deposition!)