ValueWalk
Home Business The Supreme Court’s Ruling On The GSEs

Whitney Tilson’s email to investors discussing what congress wants from big tech; how China spreads its propaganda version of life in Xinjiang; Supreme Court ruling on the GSEs; why meme stocks like GameStink and AMC may stay elevated.

What Congress wants from Big Tech

1) The House just passed six bills aimed at reining in the tech giants, especially Facebook (NASDAQ:FB), Amazon (NASDAQ:AMZN), Apple (NASDAQ:AAPL), and Alphabet (NASDAQ:GOOGL). But the market shrugged as these stocks were mostly unaffected. I think this is the right reaction, as the harshest elements of the legislation are unlikely to become law. And, even if one or more of the giants were forced to break up or divest certain divisions, this would likely unlock, not destroy, value.

First, there was so much shouting. And now there is action. (Maybe.)

The bad mood about the power of Big Tech companies has a new and perhaps surprising development: House lawmakers wrote a package of proposed legislation that, if it all passes – a very big "if" – could fundamentally change Google, Facebook, Amazon, and Apple as we know them.

I asked my colleague Cecilia Kang to walk us through the bills, and how we got here.

Shira: What does this legislation propose to do?

Cecilia: There are six bills that in different ways attempt to limit the power of Big Tech companies. One bill to provide more funding to government agencies that keep a check on corporations isn't that contentious.

Shira: Tell me about the contentious ones.

Cecilia: One of the proposals is being called the "Amazon bill" because it wants to limit companies that own a platform, or a hub for multiple companies to sell their goods or services, from also selling its own products on that platform. That is what Amazon does. It might force a breakup of Amazon.

How China Spreads Its Propaganda Version Of Life In Xinjiang

2) Speaking of the tech giants, here's another area of abuse they need to deal with: 'We Are Very Free': How China Spreads Its Propaganda Version of Life in Xinjiang. How ironic that China is using the very social media platforms it bans to spread its propaganda secretly around the world! Excerpt:

Beijing is trying to use savvier and more forceful methods to broadcast its political messages to a worldwide audience. And Western Internet platforms like Twitter and YouTube are playing a key part.

Many of these videos of people in Xinjiang first appeared on a regional Communist Party news app. Then they showed up on YouTube and other global sites, with English subtitles added...

On Twitter, a network of connected accounts shared the videos in ways that seemed designed to avoid the platform's systems for detecting influence campaigns.

China's increasingly social media-fluent diplomats and state-run news outlets have since spread the testimonials to audiences of millions worldwide.

Supreme Court Ruling On The GSEs

3) Last August, we closed out our recommendation in Empire Investment Report of mortgage giants Fannie Mae (OTCMKTS:FNMA) and Freddie Mac (OTCMKTS:FMCC) (known as "government-sponsored entities" or GSEs)... We closed at prices nearly double today's level because we (correctly) anticipated: a) the election of President Joe Biden, whose administration is against a "recap and release" plan; and b) that no court would rule in a way that would enrich a bunch of hedge fund managers, no matter the legal merits of the case.

As I've discussed in previous e-mails, I believe the government's seizure of GSEs' profits via a "net worth sweep" is blatantly illegal... but I eventually concluded that courts weren't going to do anything about it. Hence the sell recommendation...

Here's an insightful Bloomberg article on what happened this week: Fannie-Freddie Shock Is Latest Blow to Funds in Doomed Trade. Excerpt:

A plunge in Fannie Mae and Freddie Mac shares after a Supreme Court ruling marked one of the biggest setbacks yet in a disappointing decade for funds that wagered that these entities would one day exit federal control.

Capital Group, Fairholme Capital Management, Paulson & Co., Blackstone Group's credit unit, Discovery Capital Management and Pershing Square are among investors that have bet on a massive jump in value for the government-sponsored enterprises.

Those wagers went south on Wednesday after the court rejected claims that the Federal Housing Finance Agency exceeded its authority in collecting more than $100 billion in profits from the enterprises. Freddie Mac shares sunk 37%, while Fannie Mae preferred shares favored by many investors slid about 62%.

My friend Michael Kao, who's been invested in the GSEs for more than a decade and follows these entities closely, posted his insights in this Twitter thread. Excerpt: 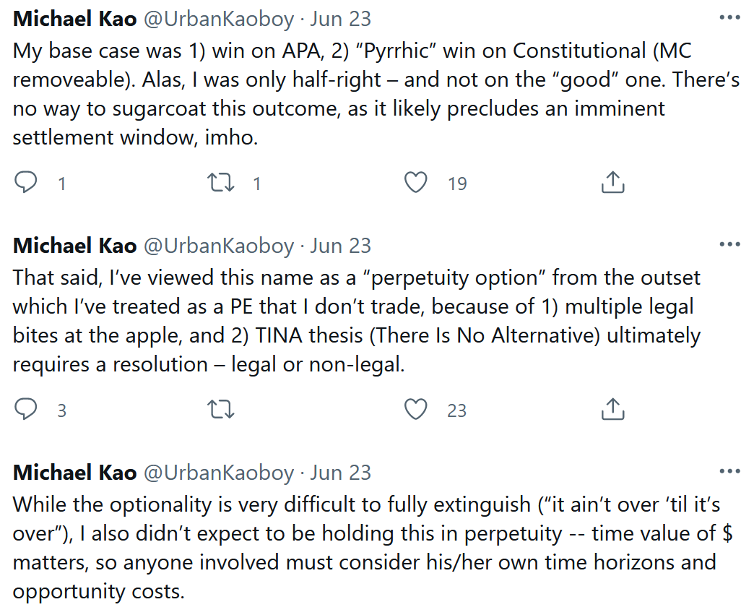 Why Meme Stocks May Stay Elevated

4) Speaking of Matt Levine, he makes an interesting argument why anyone considering shorting a meme stock like GameStop (GME) – which I call "GameStink" – or AMC Entertainment (AMC) should think hard: Fidelity Manager Lacked Diamond Hands. Excerpt:

But I think that one counterintuitive lesson of the meme-stock thing is that long sellers are also an important part of the market ecosystem, and they have gone missing. A thing that often happens is that value investors think a stock is underpriced, so they buy it, and then later a catalyst occurs and the stock goes up. And if it goes up really high, so that the value investors think it is overpriced, they will sell it, which will prevent it from being too overpriced. In a liquid market with daily prices, you get to make your investment decisions anew each day. If you bought a stock because it was underpriced and then it went up until it was overpriced, you sell it.

I realize that I sound like an impossible simpleton, but this very basic process ought to keep a lid on prices. Everyone who owns the stock has some implicit reserve price, some maximum value for the stock; if the stock goes above that value they will sell. The stock can't go above everyone's maximum value; at that point everyone is a seller and no one is a buyer.

But what if it does? What if all the professional value investors buy at $10 and are like, "I think this is a $30 stock," and then it goes to $60 and they're like, "Huh guess I was a little too conservative, I will keep that quiet and congratulate myself on my foresight and huge profits" and sell the stock, and then it goes to $400? What if every research-based value-driven investor gets out, and other, uh, self-consciously non-value-driven investors keep driving up the price? Who is left to sell? The classic answer is "short sellers," but they all got blown up on the way from $10 to $200, and have quite sensibly gotten out of this stock too.