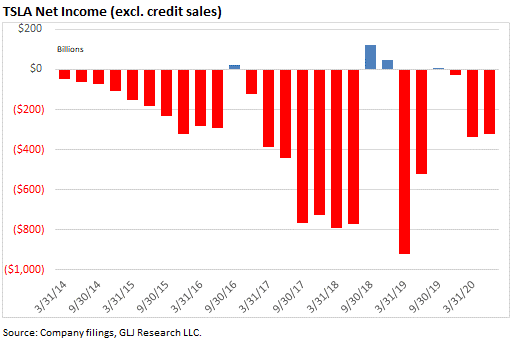 Stanphyl Capital letter to investors for the month ended August 2020, discussing Tesla’s stock split, vicious competitive landscape in China, and how it is a busted growth story.

We've carried a Tesla Inc (NASDAQ:TSLA) short position that averaged only around 1/5th the size of the QQQ short (i.e., approximately 10% to 15% of the fund), but year-to-date Tesla (the biggest bubble in modern stock market history) is up an astounding 495% (to a fully diluted market cap of approximately $515 billion vs. $523 billion for Toyota, VW, GM, Daimler, BMW, Ford, Fiat-Chrysler, Honda and Nissan combined), and that hurt us significantly.  So our short positions have obliterated the profits from our long positions, and yet when this bubble pops we’ll be glad we have them.

Talent attraction and retention are critical parts of investment management, as many investors flock to certain funds simply because of who manages them. Now that the pandemic is essentially over, fund managers are looking to the future, which means managing the return to the office, among other challenges. The Importance Of Effective Investment Management Leaders Read More

As mentioned at the beginning of this letter, we remain short Tesla Inc. (TSLA), which—with a diluted market cap of approximately $515 billion vs. $523 billion for Toyota, VW, GM, Daimler, BMW, Ford, Fiat-Chrysler, Honda and Nissan combined—is the biggest stock bubble in modern history. The core points of our Tesla short thesis are:

After being up 229% year-to-date through August 11th despite a core business that’s going nowhere, Tesla announced a 5-for-1 stock split and - and no other meaningful news whatsoever - is now up 495% year-to-date, adding $230 billion of market cap purely on the announcement of the stock split. Need I say more about what an insane bubble this stock is? Okay, I’ll say more…

In July Tesla reported Q2 net income of $104 million, which was laughably deceptive as it included $428 million of pure-profit emission credit sales, a revenue stream that will be drastically reduced later this year and disappear completely some time in 2021 when other manufacturers have enough EVs of their own. Excluding that, Tesla lost $324 million, and that’s before accounting for its fraudulently low warranty reserve. As for other blatant examples of nonsensical or unsustainable accounting, @WallStCynic points out: “D&A was down (!) Y/Y, despite a new factory coming online. SG&A + R&D was also down Y/Y.” Here are some great charts summarizing the quarter, beginning with one from GLJ Research showing Tesla’s awful record of quarterly net income excluding emission credit sales:

Next, @Keubiko wrote on Twitter: “Last 7 Qs of revenue. At some point you have to actually grow.”

From @TeslaCharts: “Accounts receivable growing while revenue is shrinking for a company that demands payment before delivery. Nothing to see here.”

Additionally, Q2’s automotive delivery number was only achievable via a large increase in Chinese sales filling short-term demand spurred by massive 2020 price cuts, but China’s EV competitive landscape is now getting vicious,  and in August we learned that Tesla’s July sales were down considerably from those in June, and the price war there is just getting started. Meanwhile Tesla’s Q2 worldwide sales excluding China were down over 30%. And oh, for perspective: in Q2 Tesla sold approximately 30,000 cars in China; GM sold 713,000.

And for those of you looking for a resumption of growth from Tesla’s Model Y, demand for that car is so poor that Tesla is already slashing its price:

Competition Will Get Tougher For Tesla

This is unsurprising, as its quality is awful, and later this year and in 2021 it will face superior competition from the much nicer electric Audi Q4 e-tron and Q4 e-tron Sportback, BMW iX3 (in Europe & China), Mercedes EQB, Volvo XC40, Volkswagen ID.4 and Nissan Ariya, while less expensive and available now are the excellent all-electric Hyundai Kona and Kia Niro, extremely well reviewed small crossovers with an EPA range of 258 miles for the Hyundai and 238 miles for the Kia, at prices of under $30,000 inclusive of the $7500 U.S. tax credit. Meanwhile, the Model 3 now has terrific direct “sedan competition” from Volvo’s beautiful new Polestar 2 and the premium version of Volkswagen’s ID.3, and next year from the BMW i4.

And oh, the joke of a “pickup truck” Tesla previewed last year won’t be any kind of “growth engine” either, especially as if it’s ever built it will enter a dogfight of a market.

Nothing’s more amusing than seeing this giant stock promotion of a company continue to add capacity (expanding its Chinese factory while supposedly breaking ground on new factories in Texas and Germany) in order to desperately try to maintain an image of “limitless demand” as it continually slashes prices to unprofitable levels (excluding unsustainable emission credit sales and accounting fraud) just to utilize far less than its existing capacity.

And for those who still think “Tesla is years ahead of the competition,” the most competitive EV region in the world is Europe, and Tesla’s EV market share there has now declined from over 30% to a year-end estimate of single digits. Courtesy of Twitter user @fly4dat, here’s a great graph showing that:

Meanwhile, in July Tesla was hit with a well-documented sudden acceleration class action lawsuit, and in May it was revealed that for years it deliberately sold cars that it knew were a fire hazard. And of course Tesla continues to sell and promote its hugely dangerous so-called “Autopilot” system; God only knows how many more people this monstrosity unleashed on public roads will kill, despite February’s NTSB hearing condemning it as dangerous. Indeed, when it comes to the safety of customers and innocent bystanders, Tesla is truly one of the most vile companies on Earth, while its initial quality is ranked dead last among 31 brands J.D. Power surveyed:

Meanwhile, Tesla has the most executive departures I’ve ever seen from any company; here’s the astounding full list of escapees. These people aren’t leaving because things are going great (or even passably) at Tesla; rather, they’re likely leaving because Musk is either an outright crook or the world’s biggest jerk to work for (or both). And in January Aaron Greenspan of @PlainSite published a terrific treatise on the long history of Tesla fraud; please read it!

Consumer Reports has completely eviscerated the safety of Tesla’s so-called “Autopilot” system; in fact, Teslas have far more pro rata (i.e., relative to the number sold) deadly incidents than other comparable new luxury cars; here’s a link to those that have been made public. Meanwhile Consumer Report’s annual auto reliability survey ranks Tesla 23rd out of 30 brands (and that’s with many stockholder/owners undoubtedly underreporting their problems—the real number is almost certainly much worse), and the number of lawsuits of all types against the company continues to escalate-- there are now over 800 including one proving blatant fraud by Musk in the SolarCity buyout (if you want to be really entertained, read his deposition!).

So here is Tesla’s competition in cars…

(note: these links are regularly updated)

Here's where Tesla's competition will get its battery cells…