On August 31st Tesla‘s latest bull run ended when the stock closed at an all-time of $498.50 per share. At that price, the market cap value of Tesla was $464 billion, an amount greater than Ford, GM, Daimler, Volkswagen, and former number one Toyota put together. With Tesla approaching $500 billion, a level reached by only a handful of companies most notably today’s tech giants, Apple, Amazon, Google, Facebook, and Microsoft, we at Cornell Capital Group thought it would be a good time to examine what is required to be a $500 billion market cap company. Before investors conclude that Tesla is a $500 billion company, they should consider what the tech giants looked like when they reached that level.

The most common justification for Tesla’s high valuation is the “Tesla is a tech company, not a car company” story. A key element of that story is the Tesla/Apple comparison, a favorite amongst Tesla bulls, who point to the size of the global cell phone market before the iPhone as evidence of Tesla’s massive growth potential. In the Tesla/Apple analogy, legacy auto companies play the part of Nokia, Blackberry and Motorola while Tesla is the iPhone maker. Extending the analogy further, Tesla's Model 3, like the iPhone, is supposed to be the product that redefines the industry by convincing car buyers to pay more for a technologically advanced car in the same way Apple took what appeared to be an expensive niche item and gave it mass market appeal.

Apple was also able to cash in on the iPhone's popularity by creating a new high margin market for apps and digital downloads via iTunes something Tesla hopes to emulate by selling Full Self Driving (FSD) and eventually a rideshare service via autonomous robotaxis. Unfortunately, unlike Apple who profited immediately from digital sales, Tesla has been slow to roll out the new features as promised.

Comparing Tesla with Apple when it hit the $500 billion dollar level demonstrates that Apple got to $500 billion by selling smart phones while Tesla reached that level primarily by selling a story. On February 29th, 2012, Apple, already the most valuable company in the US, achieved a market cap of $500 billion for the first time following a record quarter of earnings and revenue driven by its wildly popular iPhone 4. In the three quarters before and one quarter after reaching the $500 billion mark, Apple’s revenue was $142 billion with income of $38 billion.

If Tesla hit the $500 billion mark this year it will have been achieved the goal with revenue of $30 billion and earnings of less than $1 billion, much of that from subsidies. The table below shows that other big tech giants all had significant revenue and earnings when they reached the $500 billion mark. Amazon, which had the lowest income, had the most revenue as well as a record of consistent revenue growth. Facebook had the lowest revenue, comparable to Tesla’s, but had far larger earnings. 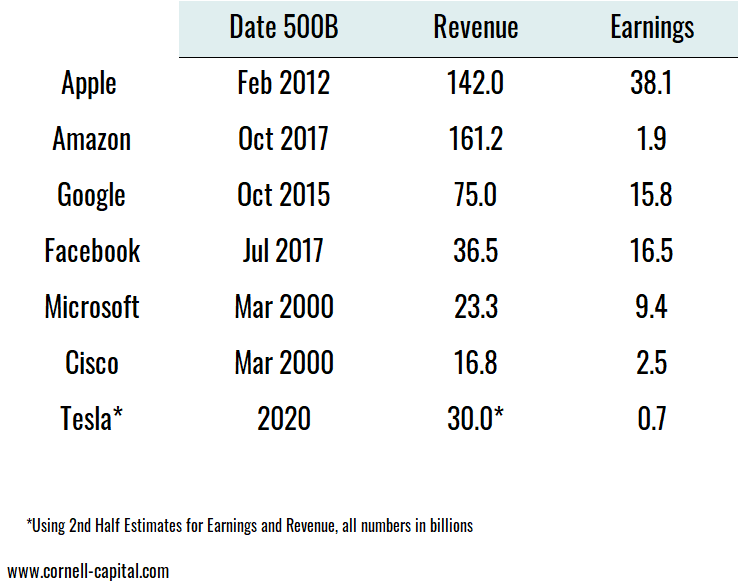 How did Tesla hit $500 billion with such low income and revenue? In addition to a compelling story, Tesla was able to reverse its long history of quarterly losses and for the first time this year post four consecutive quarters of positive earnings. When Tesla announced what was the first of their four consecutive profitable quarters in October of 2019, the stock jumped, pushing Tesla’s market cap from $45 to $55 billion.

Three profitable quarters later, Tesla’s value had grown 10 times to $460 billion. Apple first hit $50 billion back in June of 2006, six months before Steve Jobs unveiled the iPhone and a full year before the iPhone went on sale. Apple went on to produce 19 consecutive highly profitable quarters, earning an aggregate $80 billion, before reaching a market capitalization of $500 billion in February of 2012. At that time Apple was not only the largest public company by market cap it was also far and away the most profitable.

Tesla on the other hand was able to grow from $45 to $460 billion in only 4 quarters, earning just $368 million of net income, roughly one 1/200th of what Apple earned. Unlike Apple, the result of Tesla releasing its breakthrough mass market product, the Model 3 in July 2017, was a $3.4 billion dollar loss over the next 8 quarters.

Microsoft's journey to becoming a $500 billion company was different than the other four tech giants. Microsoft eclipsed the $500 billion mark for the first time in July of 1999. At that time, it had an annual revenue of $23 billion and income of $9.4 billion. However, even during the dot com frenzy its revenue and earnings were larger than Tesla’s. When the tech bubble burst in March of 2000, Microsoft fell below $500 billion, a level to which it would not return for another 17 years.

Microsoft investors who realized no capital appreciation for 17 years would have done worse had they invested in Cisco, the other member of the dot com era $500 billion club. Cisco, the biggest maker of networking infrastructure and hardware, reached $500 billion market capitalization with even lower income and revenue numbers than Microsoft. Perhaps for that reason, Cisco's fall was even more dramatic than its rise. The stock fell 80% less than a year after hitting its all-time high in March 2000. Investors who bought Cisco and Microsoft at the height of the dot com bubble because they expected earnings and revenue growth turned out to be right.

Twenty years later and both Microsoft and Cisco are both producing much higher revenue and earnings than during the height of the dot com bubble. Today Cisco accounts for 55% of the global enterprise network market and 80% of the global network hardware market and a market cap of $170 billion, well below the $500 billion mark.

Unlike Cisco, Microsoft was able to claw its way back to $500 billion by 2017. When Microsoft returned to $500 billion, 17 years removed from dot com boom, it had much stronger fundamentals. In 2017, Microsoft’s revenues were $96.6 and net income was $25.5 billion compared to revenue and net income of $73.3 and $16.1 billion the first time the market cap hit $500 billion. The table below shows that Apple and Facebook also went multiple years between their first and last times they reached the $500 billion mark. Also, like Microsoft, the market required significantly stronger fundamentals to justify that valuation the second time around. 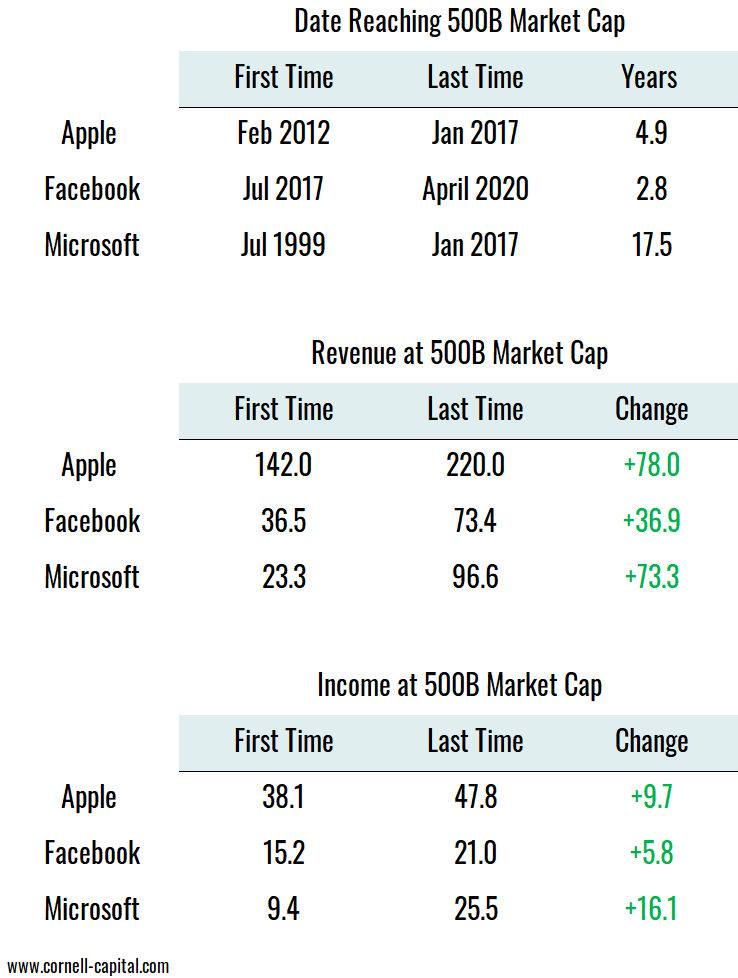 Tesla enthusiasts point to the historical growth of today’s big tech stocks as evidence of Tesla’s potential to grow beyond the $500 billion mark. But if so, it will eventually have to show that it can produce revenues and earnings consistent with that valuation. Fortunately for Apple, Amazon, Google, Microsoft, and Facebook investors, as the as growth began to level off these companies already an established history of strong earnings sufficient to justify their valuations. For Tesla, reaching $500 billion based on a great story without corresponding earnings suggests that when the growth story ends there will nothing fundamental to break the fall. If Tesla falls from grace, it might be twenty years before it approaches the $500 billion mark again.