One of the most unexpected contributors to last year’s unforeseen record spending on tech deals came from a historically unlikely group of buyers: special-purpose acquisition companies, or SPACs. These so-called blank-check companies have amassed billions of dollars of collective buying power and, as of last year, have begun reshaping the M&A landscape.

Everyone Is Getting In On The SPAC Act

451 Research's M&A KnowledgeBase shows that SPACs acquired more tech vendors in 2020 than they did in the previous four years combined. And, as our data also shows, those acquisitions often have a lot of zeros in the prices:

So far in 2021, the pace has only picked up. The M&A KnowledgeBase has already tallied seven reverse mergers in January, the second-highest monthly total we've ever recorded. Perhaps more important, the spending is off the charts: The aggregate value of acquisitions by SPACs so far in January is $24bn. That already equals half the total dollars spent by SPACs over the entire record year of 2020.

These acquisition vehicles, which are all the rage among investors right now despite mostly unproven results, have definitively moved from the outer fringes to the mainstream. In terms of fundraising, it seems everyone is getting in on the SPAC act: Silicon Valley figures, PE shops, and even Shaquille O’Neal.

Altogether, some 319 blank-check companies listed on US public exchanges in 2020, raising a record amount of capital to shop with, according to S&P Global Market Intelligence. 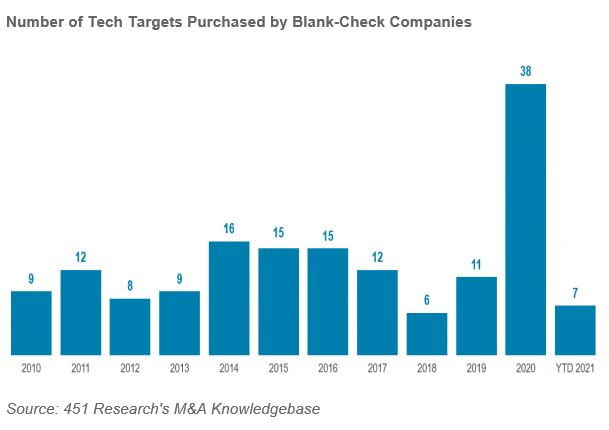 451 Research is the enterprise and emerging technology research group of S&P Global Market Intelligence and was acquired by the division in December 2019.