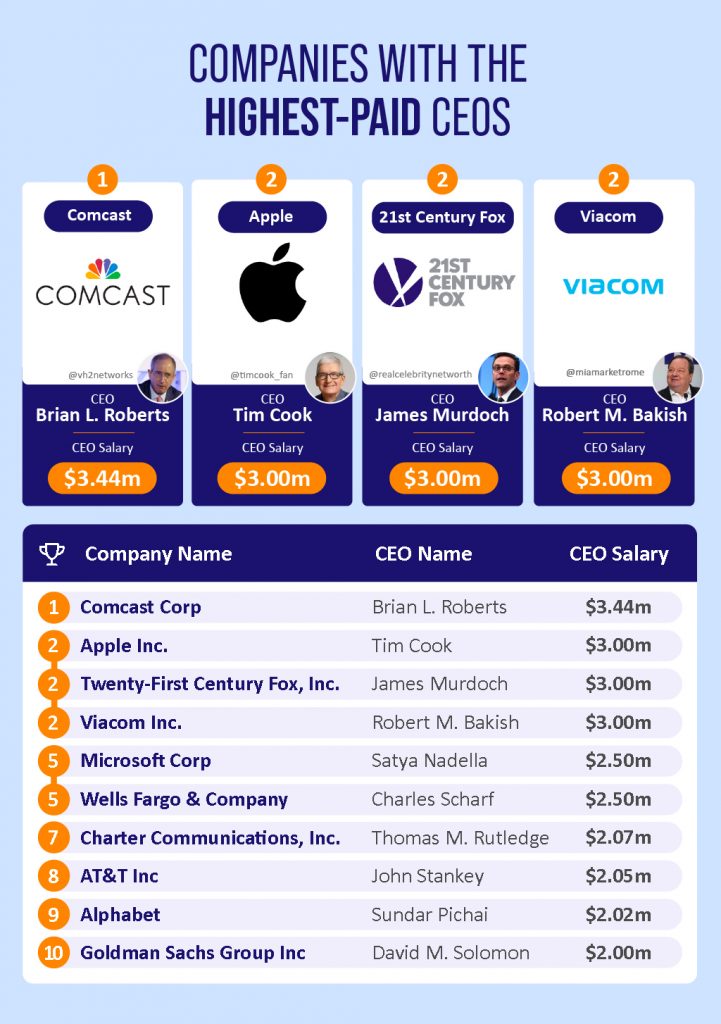 Study reveals shocking statistics about which CEOs are earning over 14,000% more than their employees annually

From Elon Musk to Jeff Bezos, billionaire CEOs are often hitting headlines around the world, causing controversy with their astounding salaries. Often the CEOs are earning hundreds of thousands, if not millions, more than their employees.

Far from being just tabloid noise, disproportionate pay between the CEO and employees can demotivate workers, leading them to feel like they are not fairly compensated for the work they do. A new study by careers board Lensa has taken a deep-dive into the salaries of the CEOs of the 100 biggest companies in the US, and compared them to the median salary of their employees.

The study firstly looked at the highest-paid CEOs, which revealed that Comcast’s CEO, Brian L. Roberts is the highest-paid, earning a base salary of $3.44m. Comcast is based in Philadelphia and owns several hugely successful media companies such as Sky Group, NBC Universal, and DreamWorks Animation. Brian L. Roberts is estimated to be worth $1.8bn overall, so his Comcast salary only makes up a fraction of his earnings. Apple’s CEO Tim Cook was in second place, with a base salary of $3m. Similarly, Viacom’s CEO, Robert M. Bakish earned $3m per year. However, whilst Tim Cook is said to be worth $1.4bn, Robert M. Bakish’s net worth dwarfs it in comparison, at $25.5m. 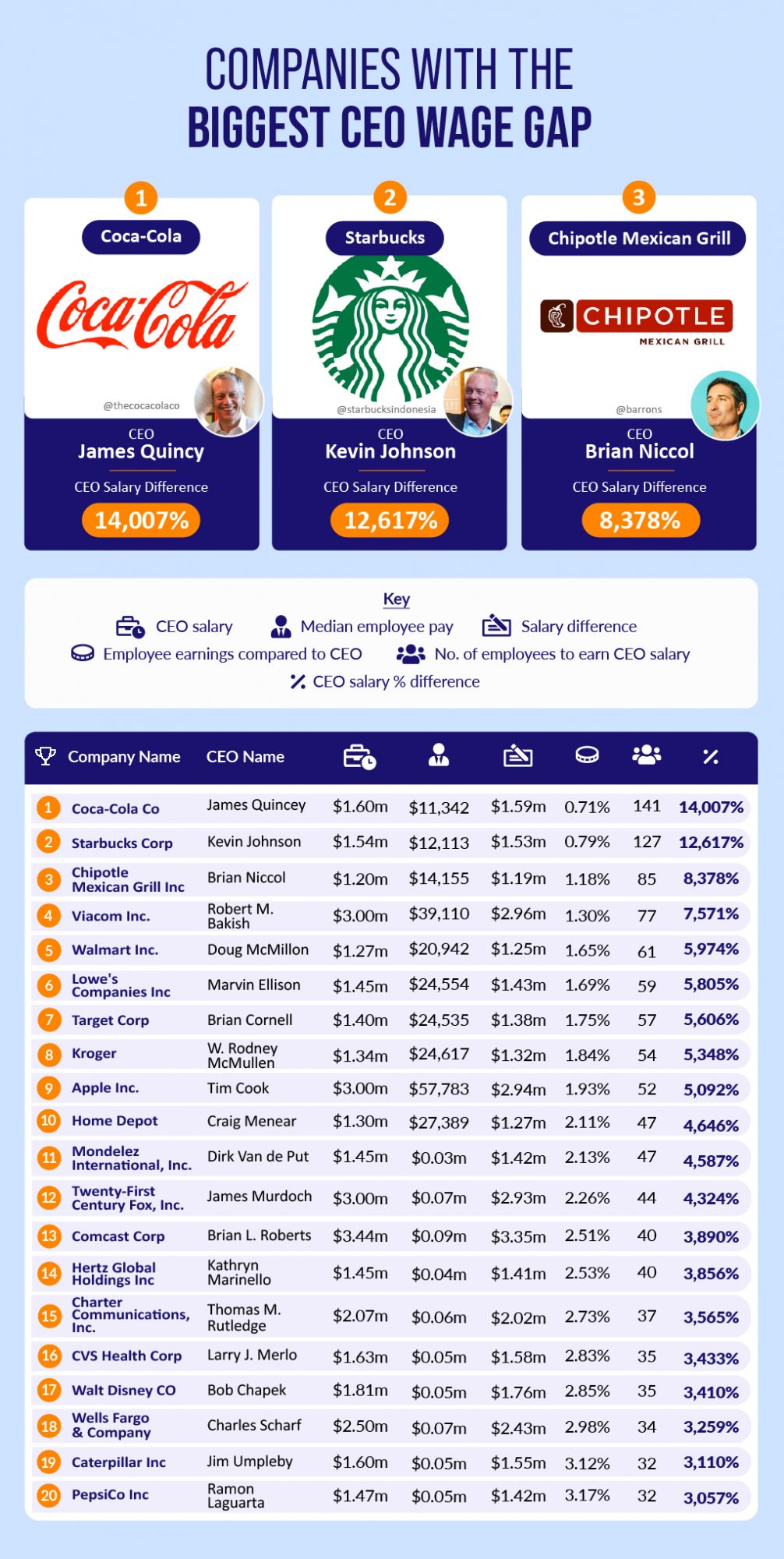 CEOs With The Biggest Wage Gap

Next, the study looked at the biggest wage gaps between CEOs and their employees, calculated as a percentage difference. In first place, with a stark gap of 14,007%, was Coca-Cola’s CEO, James Quincey. Quincey’s annual salary is $1.6m, whilst the average employee for the company earns just $11,342 - a wage gap of over $1.5m. Quincey first joined the business in 1996 and was named CEO in 2016. In second place was another huge corporation - Starbucks - and its CEO Kevin Johnson. Johnson’s annual salary stands at $1.54m, while the median employee wage is $12,113 - creating a wage gap of 12,617%. Johnson has been in his role at Starbucks for five years, since 2017. In third place was fast-food giant Chipotle, and their CEO Brian Niccol, who earns a salary of $1.2m, whilst employees are paid a median salary of $14,155, creating a gap of 8,378%. Interestingly, earlier in 2021, Chipotle was sued in New York for violating the city’s Fair Workweek Law, accusing the company of abusing workers at five locations in Brooklyn. The lawsuit was the first of its kind to be brought under a publicly-held corporate fast-food chain. At the time, Chipotle said it was dedicated to creating a ‘safe and engaging workplace’. The lawsuit is still going through court, and New York continues to investigate further complaints against the company. 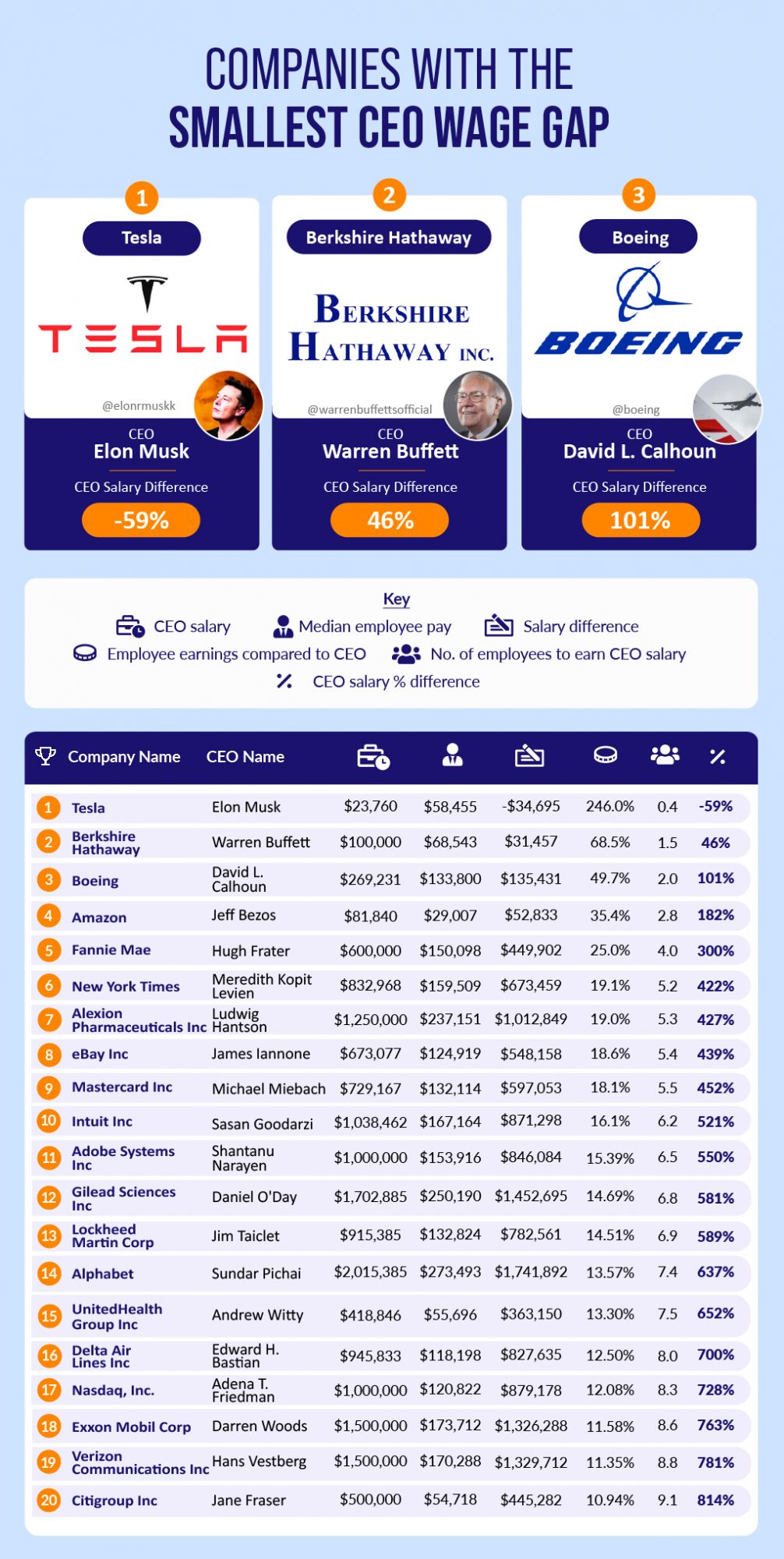 CEOs With The Smallest Wage Gap

When looking at CEOs with the smallest wage gap, it’s interesting to see Tesla’s Elon Musk sitting pretty at the top of the list, with a wage gap of minus -59%. Musk was the only CEO in Lensa’s study to take a smaller salary than an employee, at $23,760, compared to the median employee wage of $58,455. However, it’s important to note that Musk’s net worth currently sits at an astronomical $271 billion - so it’s easy to see why he doesn’t need to rely on his Tesla check. Despite his small salary, Musk benefits from Tesla’s performance in other ways - receiving $6.6bn in compensation last year from various stocks and incentives.

Just after Tesla in the ranking was the CEO of Berkshire Hathaway, Warren Buffett, who earned just 46% more than his employees - with a salary of $100,000, compared to the median employee pay of $68,543. In third place was the CEO of Boeing, David L. Calhoun, with a wage gap of 101%. Calhoun earns $269,23, whilst employees at the company earn $133,800. Other companies in the top 10 include the New York Times, eBay, and Mastercard.

It’s clear from the results of the study that the biggest CEO wage gaps come from companies with a traditionally ‘unskilled’ workforce, such as fast-food workers, cashiers, and factory staff. While big tech, engineering, and investment companies do have the lowest wage gaps, it’s important to recognize that employees are often working more skilled roles. 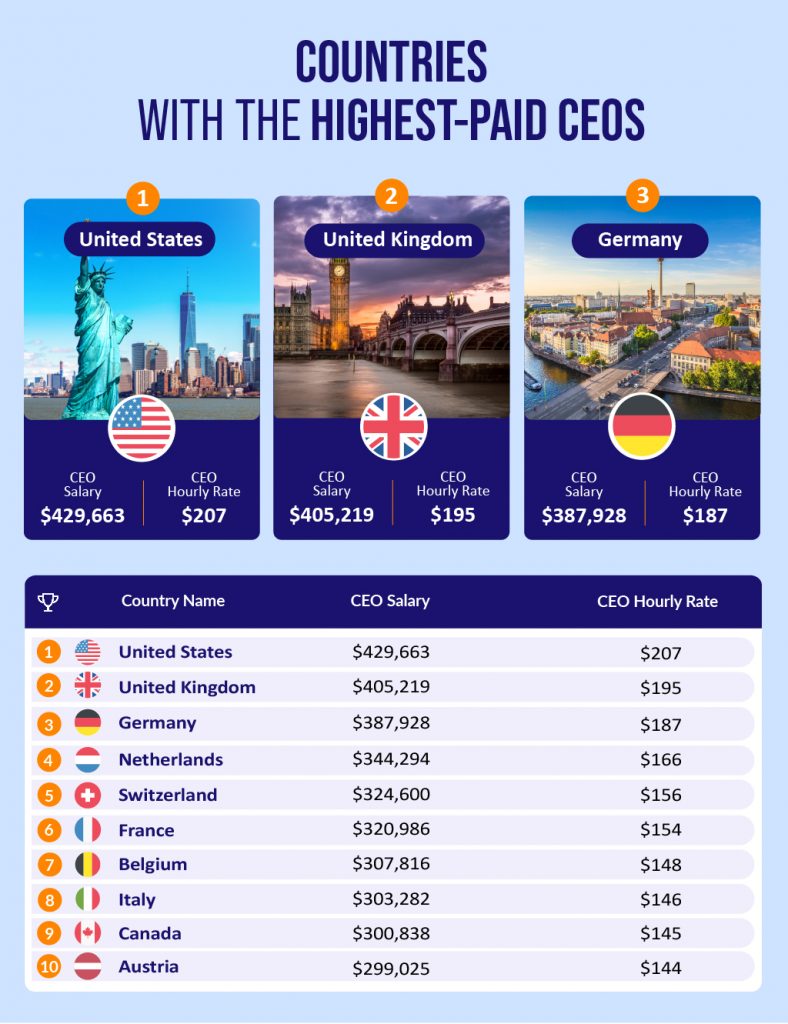 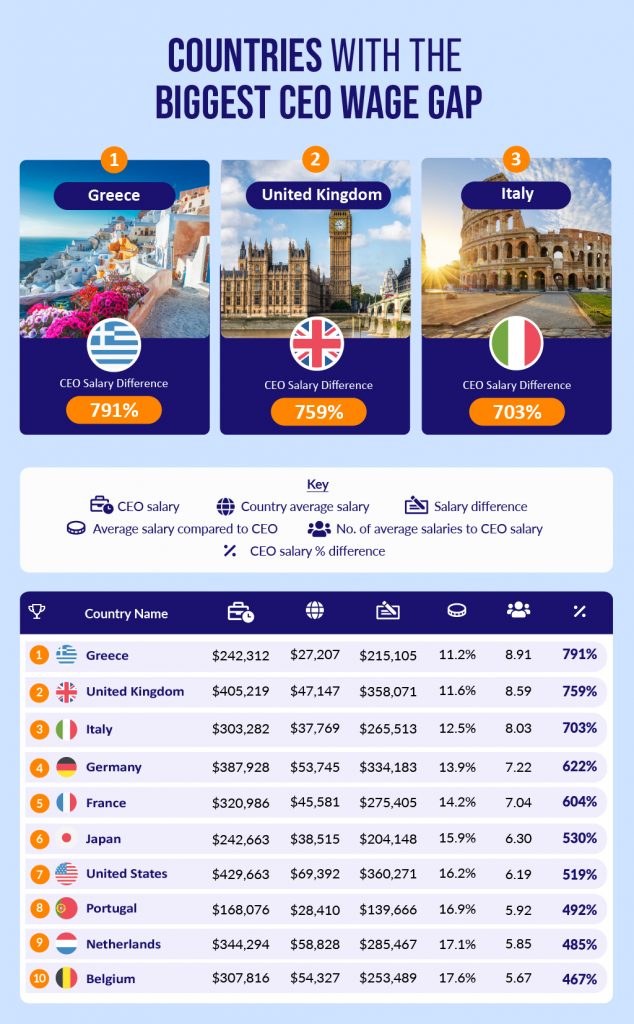 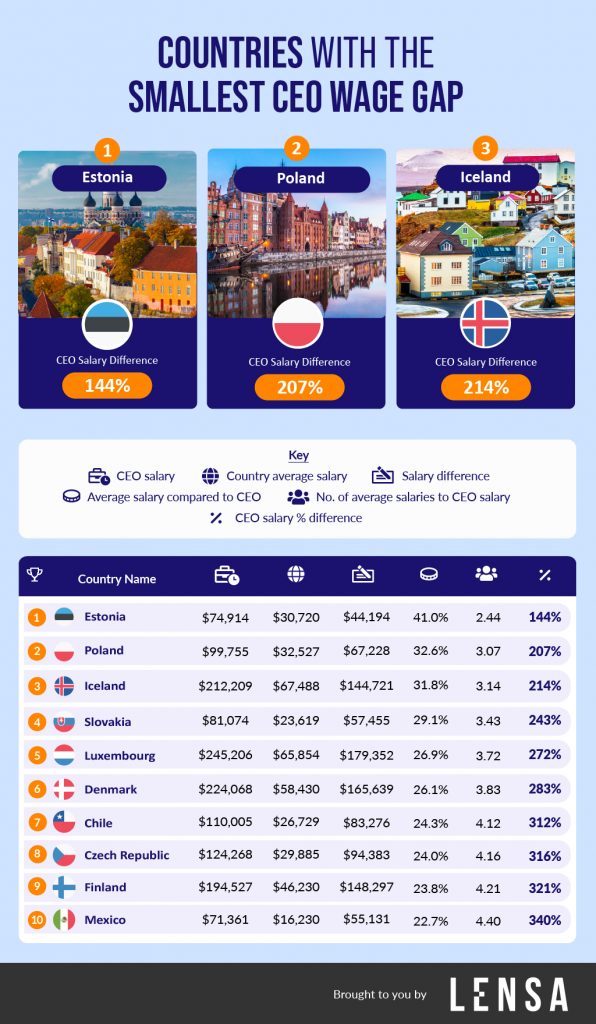