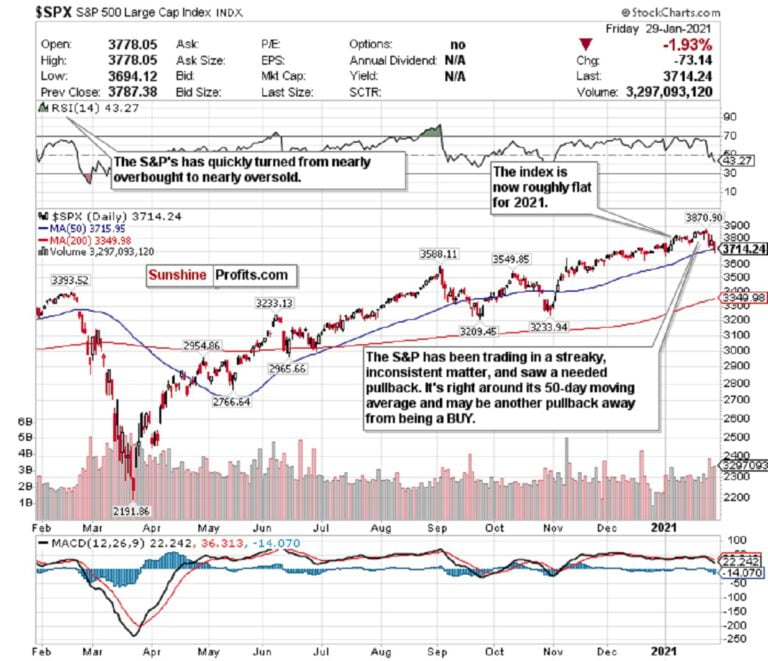 After what happened last week with beaten-down stocks such as GameStop (GME) and AMC (AMC), there are indeed signs of a bubble forming in the market. While these stocks don’t necessarily reflect the broader market, I have been calling a downturn for weeks.

The Risk Of Complacency

Complacency is by far the most significant risk in the markets right now, along with overstretched valuations beyond the GameStop “stonks,” and the possible return of inflation if the Fed lets the GDP run hot like I think they will.

According to a recent Bank of America survey of 194 money managers, bullishness on stocks is at a three-year high, and the average share of cash in portfolios, which is usually a sign of protection from market turmoil, is at the lowest level since May 2013.

I still think we are long overdue for a correction since we haven't seen one since last March. The manic moves of the past week excite me but greatly concern me.

Thus far, what has occurred in January could be the potential start of the correction I have been forecasting. A correction could also be an excellent buying opportunity for what should be a great second half of the year.

We could also finally be approaching BUY levels on many of the SELL and HOLD calls I’ve made the last few weeks.

Outside of my BUY call on the iShares MSCI Taiwan ETF (EWT), which has gained 10.12% since I made the call on 12-3, I called the Nasdaq and the Russell both overbought and foresaw last week’s downturn.

I also called the Invesco Optimum Yield Diversified Commodity Strategy No K-1 ETF (PDBC) a BUY on 12-3, and it has gained 8.33%.

Meanwhile, I’ve called the Dow Jones a HOLD for the last two months, and since 12-3, it is practically flat and up 0.15%.

While GameStop and AMC are exciting, understand the risks you’re taking and don’t follow the herd.

On the other hand, do not run and hide from a market decline, and do not let this deter you from chasing your goals. The market has overheated, but it is still not quite a broad sector-specific bubble like it was back in 2000. Yes, there are sectors more overvalued than others. But as we saw last week it’s more stock-specific. People still forget that shares of Eastman Kodak skyrocketed by 1,481% in three days last July. The broader indices seem to have done just fine since then.

With that said, Therefore, to sum it up:

Hopefully, you find my insights enlightening. I welcome your thoughts and questions, and wish you the best of luck.

We’re all in this together!

Before the start of last week, the S&P was hovering around a record-high. Its forward P/E ratio was the highest it’s been since the dot-com bust, and the RSI consistently approached overbought levels.

Now the question is, how soon before it’s a BUY? The index declined over -3.3% last week and has fallen in two of the previous three weeks. The S&P is also an index that trades in a streaky manner and can rip off multiple-day win streaks and lose streaks.

I said before that once the S&P approaches a 3600-level, that we can start talking about it as a BUY. There are short-term concerns, with long-term optimism. The S&P briefly dipped below 3700 on Friday, and the RSI is sitting around 43.25. To me, this keeps it at a HOLD, with maybe one or two pullbacks away from a BUY.

What does worry me a bit is a week full of more earnings beats did not impress the index. Investors likely anticipated this. Remember- when the market usually gets what it expects, it’s usually a reason to sell more than buy.

A short-term correction could inevitably occur by the end of Q1 2021, but for now, I am sticking with the S&P as a HOLD. You can definitely start “nibbling” though.