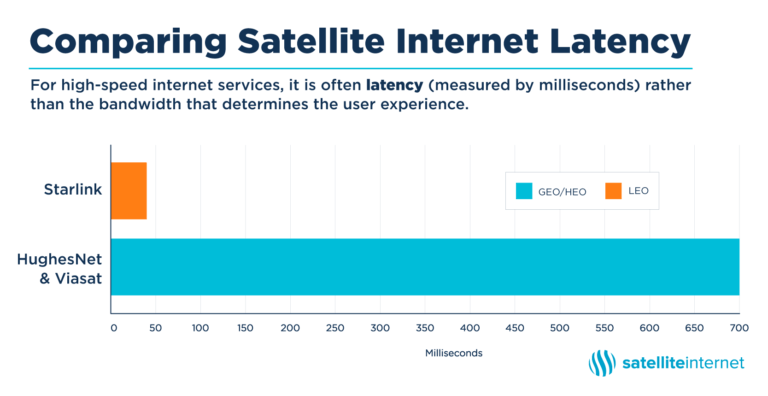 Starlink and their low earth-orbiting (LEO) satellites have been at the forefront of tech and internet news lately, but do consumers actually realize the true potential of LEO-based networks? To help American consumers understand the difference between current satellites and Starlink’s LEO satellites, SatelliteInternet.com has created a visualization to put their respective distances into perspective.

Due to the closeness and shorter data paths, LEO-based networks have a projected latency that rivals traditional terrestrial networks —including cable, copper, and pre-5G fixed wireless. LEO will especially benefit rural users by making it easier to play demanding real-time games, video calls, etc. that would otherwise not be possible on a traditional satellite carrier. For context, Latency measured in milliseconds indicates the quality of your connection within your network.

Why LEO satellites are a game changer for rural communities who have until now lacked the internet bandwidth and latency available only to more populated/wealthier cities.

Sending internet satellites into low-Earth orbit has started the new space race, and many companies are jumping into the action. It’s also sparked awareness of the digital divide and where we need to improve internet access. Some companies are getting directly involved with LEO, while others are finding other ways to improve internet access for rural residents. And one of the best about LEO is that it increases competition in the satellite internet space, which is always good news for consumers.

As we look into the future of rural internet and satellite connectivity, LEO could be the game changer.4 LEO constellations will bring faster internet speeds and wider availability than rural areas have ever had, which is nothing but good news to folks who love fresh air and wide open spaces.