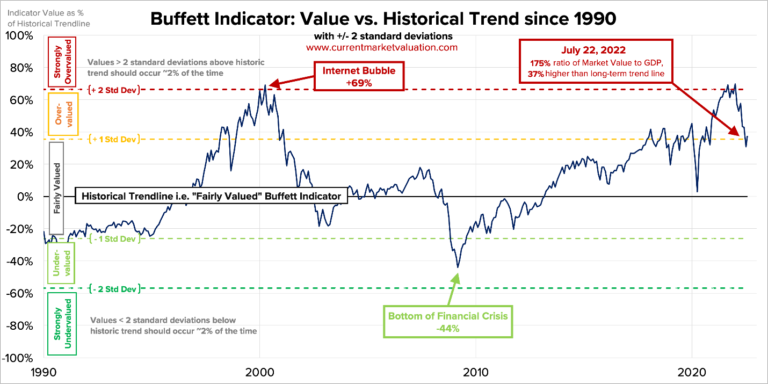 This was an awful month for us, as our bearish positioning (long lots of gold, and short lots of Tesla as both a “specific bubble-fraud” and the poster child for a still very overpriced market) cost us a lot of money, as gold declined on the month because the market has more confidence in the Fed’s inflation-fighting bona fides than I do while Tesla—on mostly poor fundamental news—was up a ridiculous 32%. At least our equity long positions were collectively up, helped considerably by NuScale Power (SMR) which was up an incredible 43%, but because it’s so speculative I sized it modestly.

Rallies such as this month’s notwithstanding, I believe stocks are only partway through a massive bear market, the inevitable hangover from the biggest asset bubble in U.S. history, and thus today, July 29th, I took advantage of this rally to reinstate our SPY short position. For far too long, the Fed printed $120 billion a month and held short-term rates at zero while the government concurrently ran a record fiscal deficit. Now, thanks to the massive inflationary hangover from those idiotic policies, the Fed is reducing its balance sheet and raising interest rates, accompanied by no extra fiscal stimulus. (In fact if the new Manchin-Schumer plan is approved, on a net basis it will be somewhat of an anti-stimulus despite its “green energy” boondoggle subsidies.)

Why do I believe that July brought us a bear market rally and not the beginning of a new bull market? Because the Fed is pulling too much money out of the system via quantitative tightening to reinflate a stock bubble, rates are now high enough that there is “an alternative,” and corporate earnings are too lousy to push stocks up on their own. Bear market rallies such as the current one of 14% (from trough to peak) are not at all unusual; in fact as @KeithMcCullough points out, there was a 23% bounce in 2008 and a 21% bounce in 2000.

And courtesy of @ISABELNET_SA and Bank of America we can see that despite bearish short-term investor sentiment polls being cited as “contrary indicators” to support bullishness, investors are still very overallocated to stocks vs. historical norms, and nowhere near as “under-allocated” as they were at the 2009 market bottom: 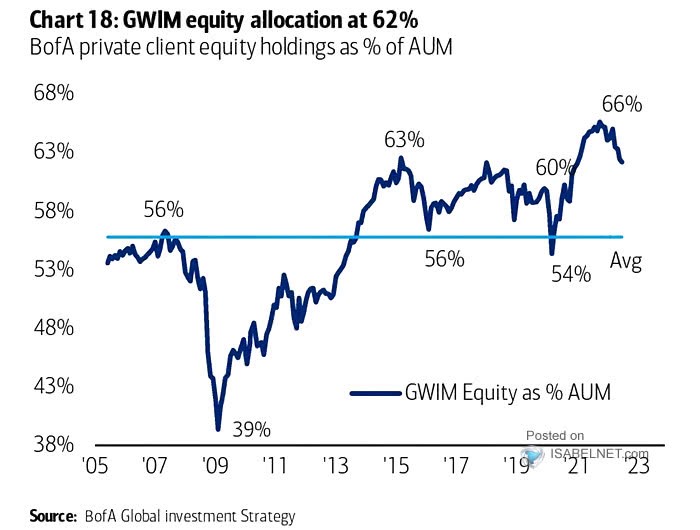 And regarding sentiment, we can see from Ed Yardeni that in the Investors Intelligence poll the highest the “bear percentage” got (so far) in the current market was only around 45% (it’s currently just 33%), yet there were multiple times during the 1980s, 1990s and 2008 that it climbed much higher:

Also, we can see from this old academic paper that during the grinding bear market of 1973 to 1975, when the S&P 500’s GAAP PE multiple dropped from 18x to 8x (it’s currently over 20x!), the bears in the Investors Intelligence poll climbed to around 75% and went over 80% during the bear markets of the 1960s. So if you think that based on this bear market’s sentiment we’ve “seen the bottom,” I wish you luck! 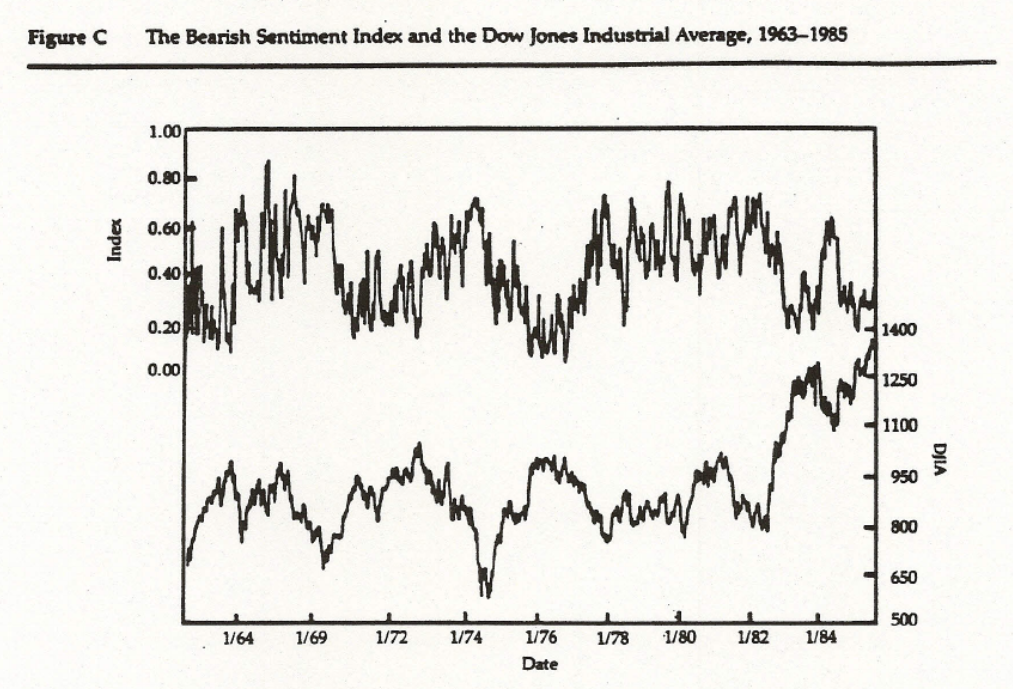 Additionally, we can see from CurrentMarketValuation.com that the U.S. stock market’s valuation as a percentage of GDP (the so-called “Buffett Indicator”) is still astoundingly high, and thus valuations have a long way to go before reaching “normalcy” (which the market will almost certainly overshoot to the downside): 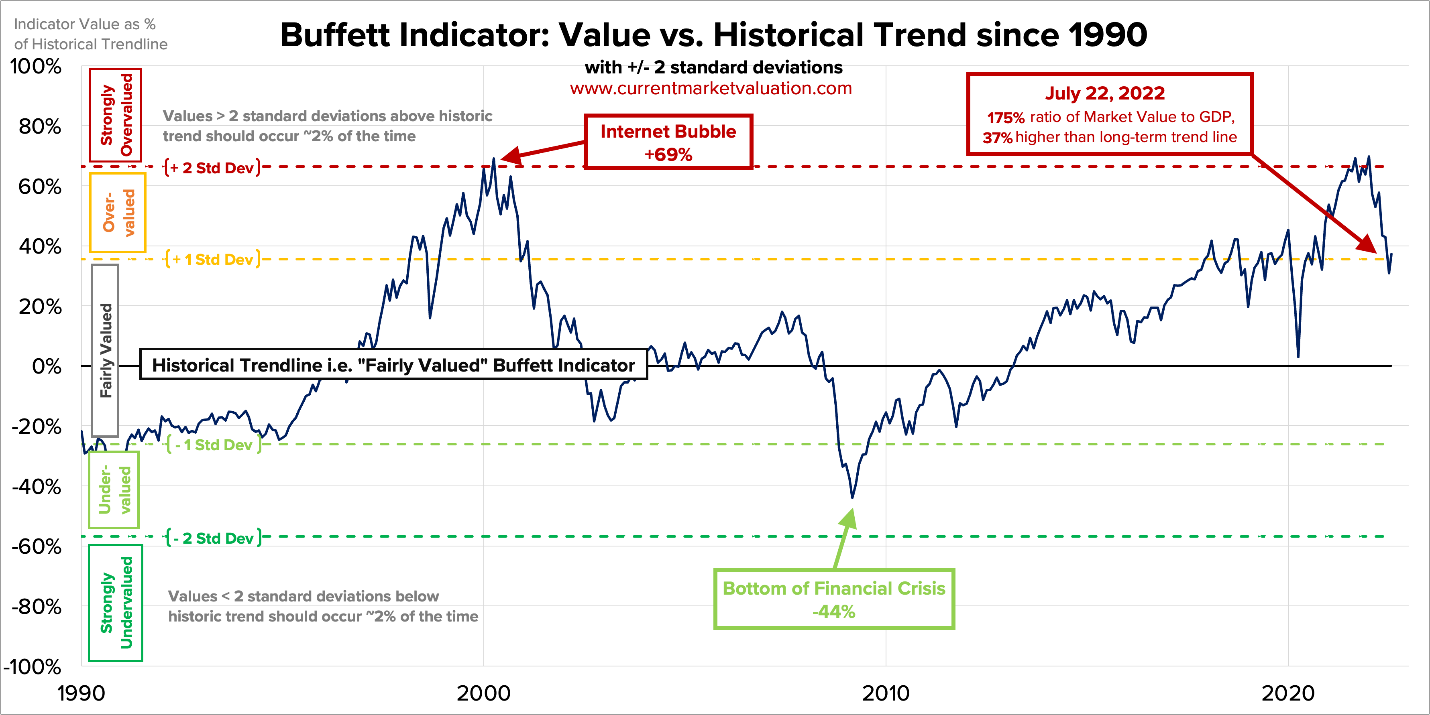 And finally, the last time the 10-year Treasury yield was where it is now (a bit over 2.6%) was March 2019 when the S&P 500 was around 2800 (over 30% lower than it is today), yet inflation was vastly lower (allowing much higher PE multiples) and growth prospects were far better. And although corporate earnings are higher now than they were then, they’re at best “sluggish” relative to expectations and, as previously noted, inflation will substantially lower the PE multiples placed on them. (Perhaps a move to 14x from the current over 20x might be appropriate, although markets typically overshoot to the downside.) When stocks get meaningfully cheaper I’ll get longer, but until then the fund’s bias is towards caution!

Meanwhile, even last year when short-term rates were set at just 0.125% and average rates were around 1.5%, the gross interest on the $30 trillion of federal debt cost $573 billion, and that cost is now on a path to nearly double. Does anyone seriously think this Fed has the stomach to face the political firestorm of Congress having to slash Medicare, the defense budget, etc. in order to pay the even higher interest cost that would be created by upping those rates to a level commensurate with even 4% or 5% inflation (not to mention today’s over 9%)? Powell doesn’t have the guts for that, nor does anyone else in Washington; thus, this Fed will likely be behind the inflation curve for at least a decade. And that’s why we remain long gold (via the GLD ETF).

Here then is some additional commentary on some of our positions; please note that we may add to or reduce these positions at any time…

We continue to own a long position in Volkswagen AG (via its OTCMKTS:VWAPY ADR, which represent “preference shares” that are identical to “ordinary” shares except they lack voting rights and thus sell at a discount). The stock has been pounded lately (down to only around 4x estimated 2022 earnings!) on a combination of “recession fears” and short-term issues obtaining energy (until alternative supplies are in place next year), but Volkswagen controls a massive number of terrific brands (including Porsche, which it’s planning to spin off in a value-unlocking transaction), and its EVs (several of which are more technologically advanced than any Tesla) combine to outsell Tesla in Europe and by 2025 should outsell Tesla worldwide. In total (without supply chain shortages) VW sells roughly 9 million vehicles a year vs. around 1.2 million a year for Tesla. Yet Tesla’s market cap is 9.5x VW’s, meaning that an investor pays almost 80x as much for each Tesla sold as for each VW sold! Meanwhile, in July the company reported excellent financial results for the first half of 2022 along with positive guidance for the second half, and replaced its showboating, Musk-fanboy CEO Herbert Diess with Oliver Blume, who has a PhD in mechanical engineering and created record profits running Porsche… an excellent decision, I believe.

We continue to own a long position in General Motors (NYSE:GM), which currently sells for only around 5x the $7/share midpoint of 2022’s adjusted EPS guidance. GM is doing all the right things in electric cars, autonomous driving (via its Cruise ownership) and software, yet it’s extremely cheap because, as with other established automakers, investors have (for now) forsaken it in favor of “electric car pure-plays,” a sector which has thus become the largest valuation bubble in history. And regarding “autonomy,” keep in mind that unlike Tesla, which sells a LiDAR-less fraud to rubes, Cruise is already running a fleet of fully autonomous cars in San Francisco; you can see many videos of this on its YouTube channel. GM will also benefit more than any other manufacturer from the proposed new EV tax credit, as it will soon have the largest variety of North American-made (a requirement of the credit) EV models fitting within the new price restrictions.

I thus consider these positions (GM and VW) to be both “freestanding value stock buys” and “relative value paired trades” against our larger Tesla short.

We continue to own a speculative long position in NuScale Power (NYSE:SMR), a developer of small modular nuclear reactors, which in July became the first such company to receive full NRC approval for its design. I believe that the world will soon acknowledge that the only practical way to decarbonize is with more nuclear power (in February the EU even designated it as “green”), and NuScale’s passive-safety design is the only one (so far) approved by the Nuclear Regulatory Commission. This is a capex light company (it provides only engineering services), and although the first reactors in the pipeline won’t come online until the end of this decade, the cash flow begins much sooner as the company is paid as construction progresses. Also, NuScale has the U.S. government as a financial backer/supporter. At a pro-forma enterprise value of only around $3 billion with great strategic holders and (according to management) enough cash on hand to become cash flow positive, I believe this is an interesting speculation, albeit a bit short-term overbought as of late July. Here’s a link to the most recent company presentation.

We continue to own a small long position in Fuel Tech Inc. (NASDAQ:FTEK), a seller of air and water pollution control technologies. Although there’s no identifiable near-term catalyst for this stock, at our basis of $1.31/share we paid an enterprise value of only around 0.2x TTM revenue for this 47% gross margin company which has around $1.12/share in cash, no debt, and a TTM operating loss of only around $1.3 million vs. $34 million in cash. This is the kind of company that will either ignite growth and its stock will take off (its new “Dissolved Gas Infusion” water treatment technology is a potential medium-term catalyst for that), or it’s so cheap that it makes a good strategic acquisition target, as removing the costs of being an independent public company would make it instantly profitable while allowing the buyer to acquire a nice chunk of revenue very cheaply. In short, at its current price I think it’s a good “value stock” in which to park some money and see what happens; meanwhile in May the CEO stepped up and bought stock in the open market.