Spruce Point Capital Management, LLC (“Spruce Point” or “we” or “us”), a New York-based investment management firm that focuses on forensic research and short-selling, today issued a detailed report entitled “Sour on an Oat-Lier Investment” that outlines why we believe shares of Oatly Group AB (NASDAQ:OTLY) (“Oatly” or the “Company”), face up to 30% to 70% intermediate-term downside risk, or $6.40 – $14.90 per share, and longer-term insolvency risk. 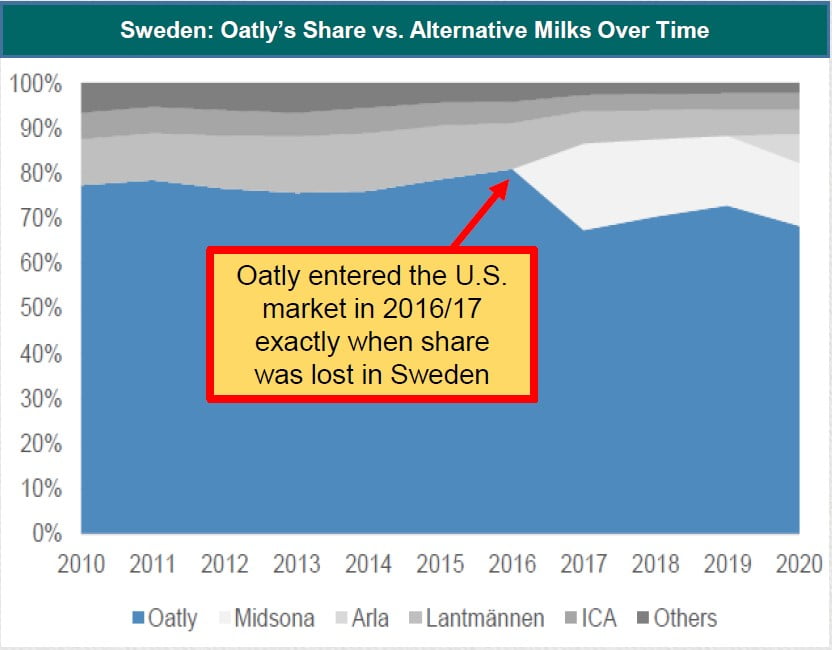 For a business promoted as an ESG play and committed to transparency, Spruce Point finds several corporate governance red flags at Oatly.

Following our uncovering of Oatly’s first detailed sustainability report, we take issue with how the Company presents its progress to investors in the first slide of its Investor Presentation (June 2021). The analysis is based on a 2013 study (updated in 2016) which does not include its recent expansion into the U.S. and Asia, which we believe has been poorly planned and executed. It appears Oatly has “cherry-picked” the study’s results by failing to show that its impact on water consumption is worse than dairy milk. Through a FOIA request, we learned that Oatly’s production process also generates dangerous volumes of wastewater that requires it to build its own treatment facilities and the Company is out of compliance with EPA regulations in New Jersey. Oatly’s first study discusses the importance of transportation costs, accounting for nearly 1/3rd of its environmental impact. Yet, in Oatly’s quest for rapid business growth and its race to IPO, we believe it has recklessly disregarded these costs by locating production facilities thousands of miles from its oat sources, and also sought to obscure the impact of shipping costs in its financial statements.

Oatly promises to be a good company, putting people ahead of the reckless pursuit of profits. It also strives to provide transparency about its products and suppliers to the consumer. However, we find it has taken a different approach with its investors. Oatly’s CFO Christian Hanke provides an incomplete biography that obscures his role as Manager of Financial Reporting at Stratus Technologies (1999 - 2005). During his time at Stratus, it restated financials over a multi-year period related to revenue recognition and lease accounting. In addition, Oatly appointed Frances Rathke as Chair of its Audit Committee. In the past, Ms. Rathke misrepresented her CPA status and while she was the CFO, Treasurer and Chief Accounting Officer of Green Mountain Coffee Roasters (Nasdaq: GMCR), it was investigated by the SEC for its accounting practices and restated financials related to incentives that hit revenue and inventory. Ironically, Oatly fails to disclose revenue incentives and we find issues with its inventory accounting methods. Oatly’s Chairman of the Board fails to disclose his role at Genius Foods, a company that chased the once hot gluten-free food trend but has since struggled.

We interviewed a former U.S. manager and accounting professional of its North American business. When we asked the accountant about the #1 risk of investing in Oatly, the response was “are the financial statements accurate?” Concerns were raised about the plant-by-plant CapEx and depreciation, as well as CapEx inflation at its New Jersey and Utah production facilities. “My jaw dropped” was the reaction from the manager regarding the $10 million paid for a former plumbing station in rural southern New Jersey that would become its East Coast production hub. Our FOIA uncovered that the location was inspected by local environmental health experts and cited for excessive trash dumping. In addition, the FOIA reveals that Oatly has struggled with expansion plans since the property is constrained, and its neighbor, the local Board of Education, has generally been reluctant to sell its property to Oatly. Oatly has also had to deal with harmful wastewater byproducts. In 2019, Oatly announced that Utah would be its West Coast hub, with a budget of $40 - $50 million. The plant was described by a former executive as “not optimal and chasing short-term tax incentives.” Two former employees agreed that Utah’s actual CapEx is running more than 100% over budget at $100 million, and a recent facility inspection report Spruce Point uncovered shows it is still not complete in Q1 2021. 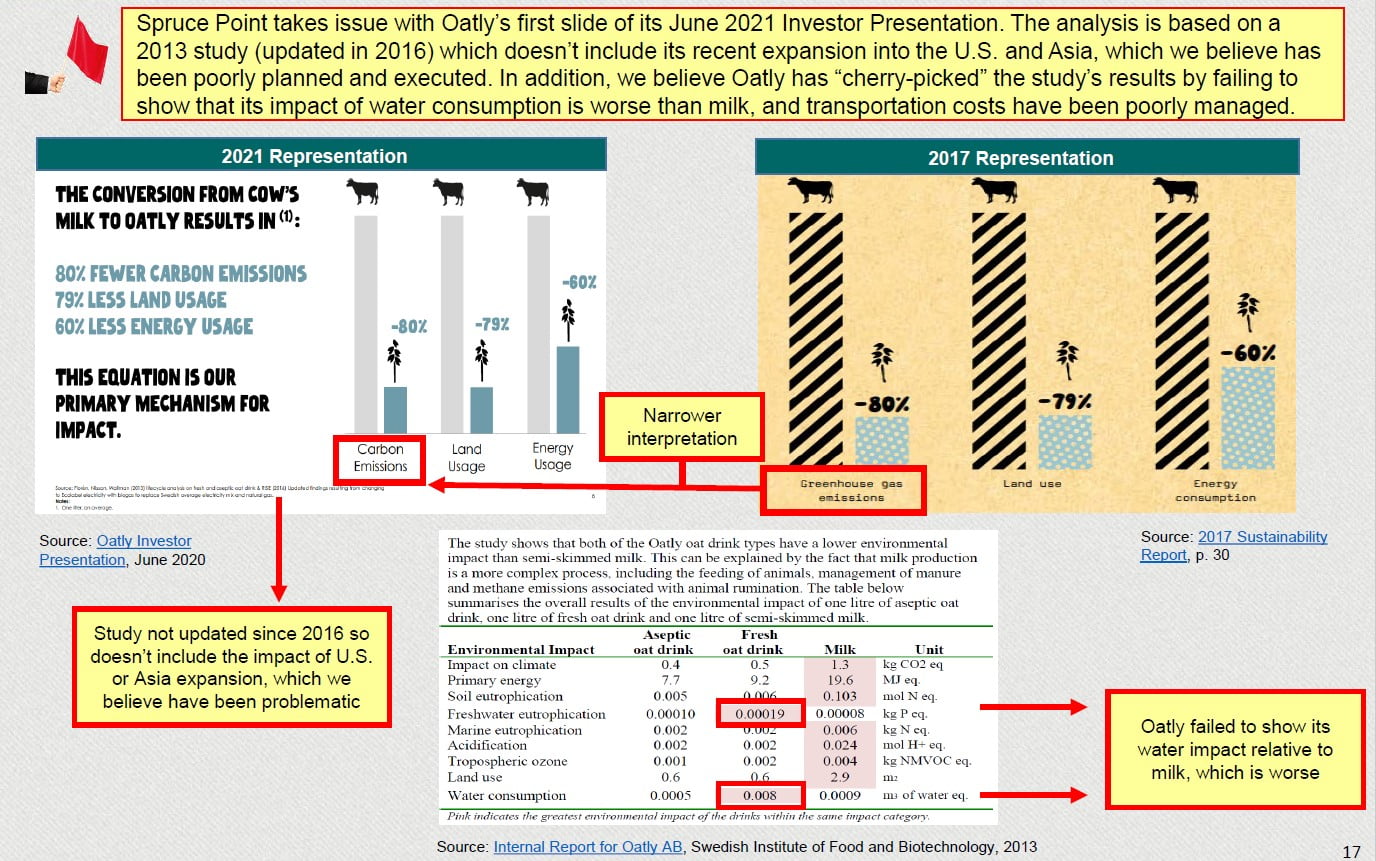 Oatly has churned through three auditors in six years, a fact it fails to disclose in its prospectus. We find inconsistent U.S. segment revenue and consolidated reported revenue, as well. Oatly subtly modified a critical slide in its June 2021 Investor Presentation, that also appeared in its prospectus. A footnote now calls out that finished goods of oat base production volume are an “estimate.” We believe that if volumes of production are an “estimate,” then Oatly’s entire reported revenue stream should also be qualified. Oatly claims no seasonal revenue patterns, yet we found a research analysis of Oatly produced at Sweden’s Lund University showing clear historical seasonal patterns. Oatly’s MD&A discussion gives very little discussion about revenue or cost of sales drivers. We believe its gross margins are overstated by 640% by not including outbound shipping costs, in conformity with industry best practices. Oatly says nothing about its exposure to oat and rapeseed commodity prices, despite these costs having skyrocketed 33% and 38% YTD, respectively.

Evidence That CapEx Is Inflated And New Capacity Additions Will Skyrocket By 77%.

If in fact Oatly’s revenues are overstated, costs understated, and net income overstated, one way to balance inflated profits is to inflate CapEx. We find anomalies between CapEx through the cash flow statement and additions to the balance sheet. There is also evidence of phantom asset sales with no associated cash inflows. We also have evidence to suggest that Oatly is delaying movement of assets from “Construction in Progress” to completed assets. In 2019, Oatly competed three expansion projects in Sweden, the Netherlands and the U.S. Related documents show that these projects cost approximately $61 million. However, Oatly only transferred $45 million from the “Construction in Progress” to completed fixed asset accounts. As a result, we estimate the depreciation expense and net income loss were understated by 5%. Oatly is telling investors it now needs $750 million - $1,000 billion of CapEx to increase capacity from 350 million to 1,400 million liters of oat base, implying $0.72 - $0.95 per liter. We estimate historical capacity additions have been $0.64 per liter, thus new expansion CapEx is 11% - 48% higher. Even some of Oatly’s sell-side analysts disagree with its CapEx projections. Barclays is estimating $1.13 per liter of capacity addition, or 77% higher than our estimated historical cost of $0.64 per liter.

Oatly is having issues supplying the market, and from the lips of its Chief Marketing Officer John Schoolcraft, this should be viewed as a sign of “success.” The narrative being spun is that Oatly is in such high demand, however, Spruce Point believes its problems reflect its ineptitude in forecasting and production execution. For example, in mid-2019, the CEO projected $230 million of sales, but actual results came in 11% lower. Based on our channel checks and discussions with distributors, they are not waiting for Oatly to fix its issues and are stocking among dozens of new competitors to hit the U.S. market. It is evident to us that Oatly is losing market share to Chobani and well-capitalized peer Califia Farms. We have been tracking Oatly’s core oat milk product online at major food retailers such as Amazon, Walmart and Kroger and find evidence it is losing promotional prominence and even being price discounted. We also believe Oatly faces waning chances of success in yogurt and ice cream. We find evidence that Oatly’s yogurt is also being price discounted and losing shelf space.

Valued at $12 billion, and implying 17x and 75x 2021E sales and adjusted gross margin, Oatly’s valuation is beyond reason when compared with its market opportunity, and other high-flying plant-based food companies such as Beyond Meat. Per Euromonitor, its own data source, the plant-based dairy market in its key regions is expected to reach $21 billion by 2025. However, Oatly’s current valuation is almost 60% of the potential market. Based on our current observations of the competitive dynamics, it would seem unlikely to us that Oatly ever captures this percentage of the market. Sell-side analysts point to Beyond Meat’s inflated valuation to justify Oatly’s premium valuation. Yet, most Street reports conspicuously fail to see Oatly’s gross margin is 500bps below Beyond Meat’s and exclude other lower multiple non-dairy comps such as SunOpta and even Vitasoy when trying to value Oatly. Our intermediate price target is $6.40 – $14.90 (30% – 70%) lower, with up to 100% long-term downside risk as investors come to grips with the fact that Oatly will likely never make money in a notorious fickle and deflationary food industry.

Please note that the items summarized in this press release are expanded upon and supported with data, public filings and records, and images in Spruce Point’s full report. As a reminder, our full report, along with its investment disclaimers, can be downloaded and viewed at www.SprucePointCap.com.

As disclosed, Spruce Point has a short position in Oatly Group AB and owns derivative securities that stand to net benefit if its share price falls.