Embattled department store chain Sears Corp. filed for bankruptcy protection early Monday morning with plans to present a restructuring proposal to a judge later that day. Eddie Lampert stepped down as CEO but remains chairman of the board and will use his hedge fund, ESL Investments, to provide further bankruptcy financing on top of the $1.875 billion already lined up by the company. Lampert is also considering bidding for a large portion of the company’s stores and its Kenmore brand through an auction.

Sears Corp. met with investors last week who pushed the retailer to liquidate ahead of Monday’s $134 million loan repayment deadline. The company had already said it would not be able to find the cash and Lampert said he would not finance the loan payment through ESL.

Research firm Boatman Capital shorted Babcock International on Monday, criticizing the company for hiding poor performance and accusing the executives of damaging the company’s future. The first-time short seller also said that the engineering firm has poor relations with its key clients, including the U.K.’s Ministry of Defence, due to delays and will most likely be subject to penalties and cost increases.

Boatman also said that the firm is facing heightened scrutiny, particularly following the collapse of peer construction giant Carillion, at the beginning of the year. According to Boatman, Babcock is a much better company but could be subject to increased costs, revenue pressure, and declining margins.

The number of public activist demands at U.S.-based companies that were M&A-related between January 1 and October 12 in respective years. 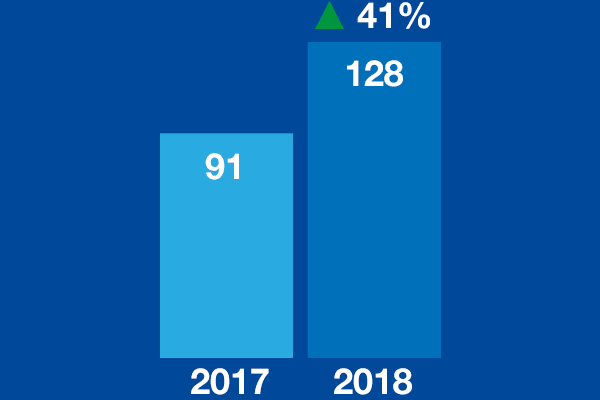