In 2021, the global economy should experience positive growth.

As the vaccination campaign progresses, it will become possible to gradually abandon the virus containment policies based on restrictive measures, allowing the economies to open internally and, at a later stage, externally as well.

At least in the initial part of the year, however, restrictive measures will be confirmed, and the economies will need support from the economic authorities. To this end, the ECB has extended quantitative easing until March 2022, the Fed has said it stands ready to introduce new accommodative measures, the Biden administration is negotiating a new fiscal stimulus package with the Republicans, and in Europe work is still in progress towards activating NGEU/Recovery Fund resources.

According to the baseline scenario, the markets should confirm pro-cyclical trends. Short-term interest rates will be kept at their current levels by the central banks, whereas medium and long-term rates should increase. Investors will continue to seek return from risk assets, on both the bond market (emerging bonds, high yield bonds, hybrid instruments), and the stock markets. On the stock markets, the uptrend should be supported more by recovering earnings, and less by higher multiples/lower equity risk premiums.

There are two opposite risk scenarios for 2021.

Any disappointments tied to the diffusion of the vaccines (delays in their administration, or lower than expected efficacy), would trigger a downward revision of growth estimates. In this case, a volatile phase on the markets would be likely, but also a subsequent new round of stimulus measures from central banks and governments. At this point, investors, as they did in 2020, will resume seeking return from risk assets, as the only alternative in a context of low bond rates for an extended period of time.

By contrast, stronger than expected economic growth would be welcome and initially supportive for risk assets, in combination with rising government bond rates. At some point, however, the uptrend of long-term rates would be perceived as hindering the recovery, triggering, as has been the case in the past, a surge in volatility. The subsequent downward reversal of interest rates would act as an automatic stabiliser, enabling the stock markets to subsequently recover.

In the United States and Europe, where the pandemic is still spreading, focus will initially be on the efficacy of the vaccines, whereas the risk of an overheating of the economy would only potentially emerge at a later stage. In China, by contrast, the most unexpected surprise could be a resurgence of Covid infections. More realistically, in China sooner than elsewhere, the debate will begin on the appropriateness of cutting back on fiscal and monetary stimulus, to prevent an overheating of the economy.

Expansionary monetary and fiscal policies in the first half of the year, and the initial effects of the vaccination campaign starting in the second half, allow for a favourable outlook for 2021. A pro-cyclical approach to investment choices is maintained, underweighting core government bonds, and overweighting spread bonds. Neutral view on stocks, as the near term movement seems to be already pricing in the positive developments expected at the beginning of 2021. 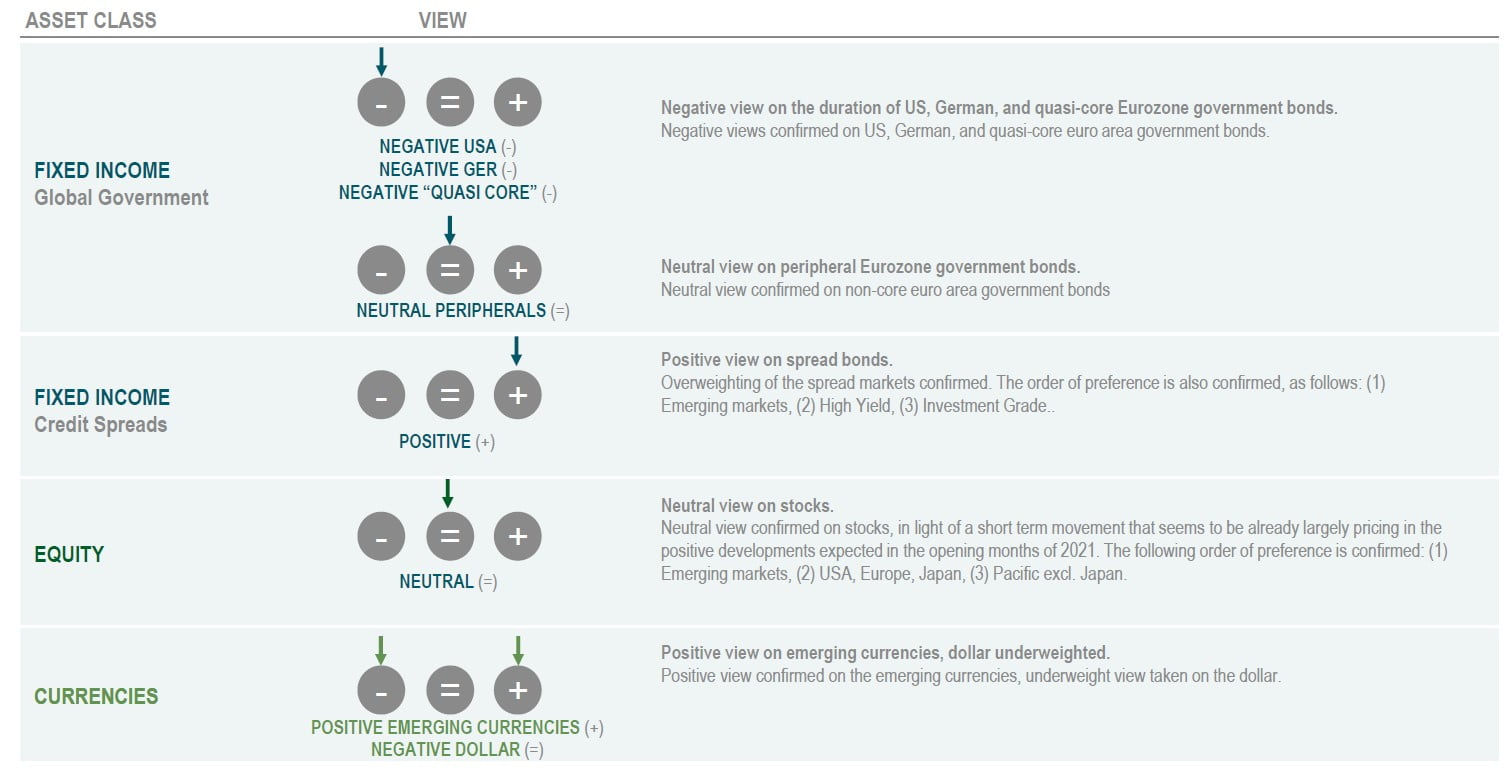