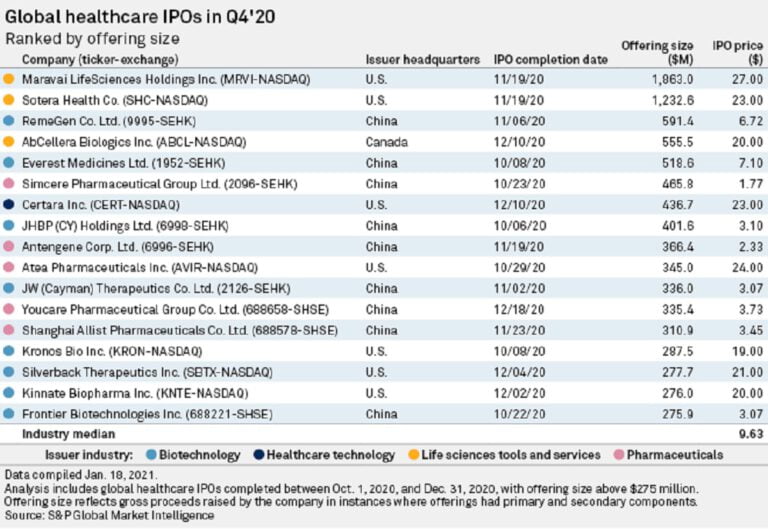 "I think investors in Asia recognize [biotech] is a vital industry for the future," Brad Loncar, a biotech investor and CEO of Loncar Investments, told Market Intelligence. Healthcare listings in Hong Kong, which is the largest market in Asia and the second-largest in the world for biotech IPOs, could be over 30 in 2021, Irene Chu, Hong Kong-based partner and head of new economy and life sciences at consultancy KPMG China, told Market Intelligence. Goldman Sachs & Co. LLC and Goldman Sachs (Asia) LLC, which are part of Goldman Sachs Group Inc., acted as underwriters on the majority of the top-ranking healthcare IPOs in North America and Asia, respectively, during the fourth quarter of 2020. New York-based Credit Suisse Securities (USA) LLC and Jefferies LLC served as underwriting banks for IPOs by four companies each in North America. Among the Asian IPOs, JPMorgan Chase & Co.'s J.P. Morgan Securities PLC and J.P. Morgan Securities (Asia Pacific) Ltd. were underwriters for three offerings each. A quarterly report by EY tracked 1,363 IPOs during 2020 worldwide, up 19% over 2019, while proceeds from the offerings totaled $268 billion, a year-over-year increase of 29%. Following the technology and industrials sectors, healthcare took the third spot in terms of IPOs, with 235 offerings totaling $50.4 billion in value.