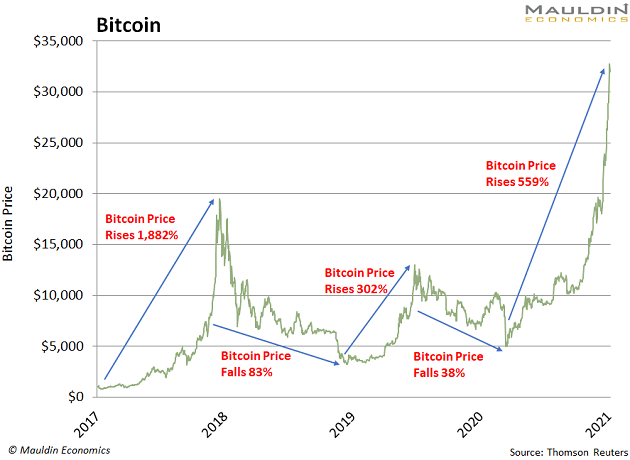 Bitcoin celebrated its 11th birthday on January 3. And what a party it’s been, with the world’s first and most famous cryptocurrency now trading near $40,000.

Warren Buffett famously referred to Bitcoin as "rat poison squared." The Oracle of Omaha might never own the King of Cryptos. But even he has to admit that it is charting a path higher… one that is as unique as the asset itself.

Now we’re back in a Bitcoin bull market. Since the March 2020 lows, Bitcoin’s price has rallied over 500%. And there are plenty of reasons to believe it's going to go a lot higher.

Most people can’t stomach that much volatility and risk. And you don't have to. Nor do you have to miss out on the next leg of the Bitcoin bull market.

Even better, you don't have to spend as much as a base-model Tesla (TSLA) on a single stake.

You are familiar with financial exchanges. These are companies that facilitate the buying and selling of stocks, bonds, commodities, and now—you guessed it—bitcoin.

Some of these exchanges support bitcoin futures trading. At its simplest level, futures contracts let people bet on how much the price of something will rise or fall.

Now, I'm not recommending you trade Bitcoin futures. But you can make money off the trading action. That's because the exchanges charge fees for these transactions.

When trading volume goes up, like it is now, so does the bottom line of the exchanges.

And now, so can yours…

2 Low-Risk Ways to Profit from Bitcoin

The company reported record volume on its Bitcoin futures exchange on May 13. It processed 33,700 contracts, equal to $1.35 billion.

And this is a sliver of its $5 billion-per-year business. That's why CME Group can pay a safe and stable 1.6% dividend. 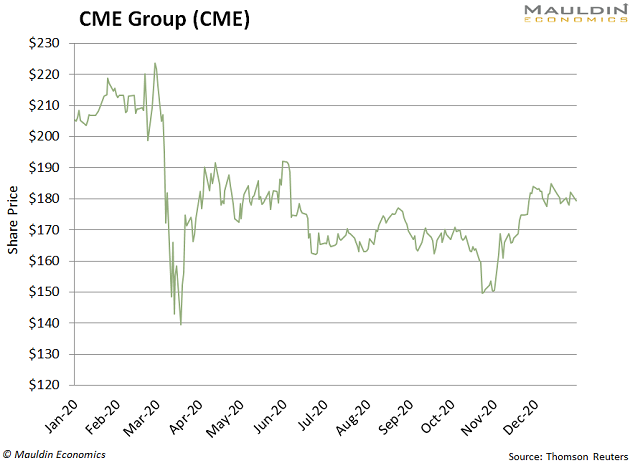 The second company on my list is Intercontinental Exchange (ICE).

While ICE’s dividend is small at 1%, it’s rock-solid. The company has strong free cash flow and has a five-year average payout ratio of 27%. 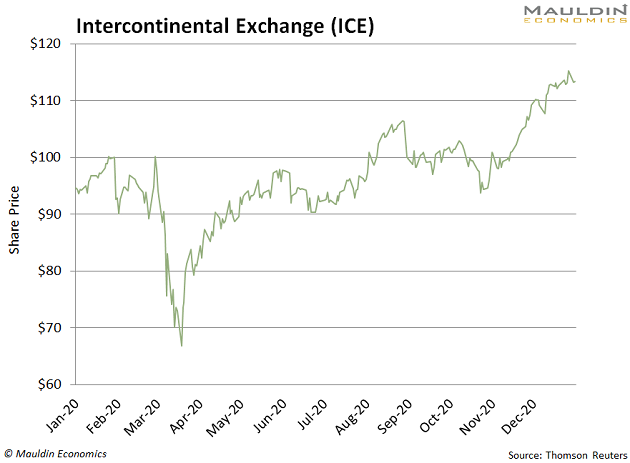 I think Bitcoin is going to smash a lot more records in the future when it comes to the price of this cryptocurrency and the trading volume on exchanges like CME and ICE.

Both of these stocks are trading in the triple digits. Not only do they offer a less expensive way to bet on big-ticket Bitcoin, but they pay you to wait for the King of Cryptos to trade even higher.

My brand-new special report tells you everything about profiting from “sin stocks” (gambling, tobacco, and alcohol). These stocks are much safer and do twice as well as other stocks simply because most investors try to avoid them. Claim your free copy.