“We’re giving the March Employment Situation Report an A grade for several reasons, mostly because top-line job growth of 916k was more than 40% higher than the market consensus expectation of +647k. Private job growth of 780k was about 35% above expectations of +575k. What’s more, the Labor Department revised February payrolls higher to +468k total and +558k private. These were 89k (23.5%) and 93k (20%) higher, respectively, than what was reported last month. January job growth is now +233k, instead of +166k when revised last month and +49k when first reported two months ago.

In the goods-producing sector, employment in natural resources and mining rose 20k in March, the largest 1-month increase in almost 32 years. Construction payrolls rose 110k in March, more than offsetting their 56k decline in February. The net change over the past two months was +27k, which was in line with the trailing 3-month average prior to that. Factory payrolls went up by 53k last month, their best gain in six months and better than any increase during the previous administration. Manufacturing employment remains 515k (4%) below its pre-pandemic level.

Among service-providing industries, it was no surprise that nearly half (46.9%) of all employment growth last month came from the Leisure and Hospitality industry (+280k). Then about one is six of the net new jobs added in this sector came from the Education and Health Services industry (+101k). Professional and Business Services employment rose 66k, though that was the weakest growth in 11 months. Wholesale trade added 24k to payrolls in March, more than in the previous two months combined (20k). Ditto for Transportation and Warehousing, which added 48k in March compared to 42k total in January and February.

Official Unemployment Rate Is Down 0.2%

Average hourly earnings perhaps disappointed on the surface, having fallen 0.1% m/m instead of rising 0.1% m/m as expected. That’s because the more jobs added at the lower end of the wage scale brought the average payment to labor down. This should normalize as Leisure and Hospitality and Retail jobs return to normal. Consider as well that average hourly earnings in February now show a rise of 0.3% m/m instead of 0.2% m/m as previously reported. That puts the 2-month average growth at +0.2%, or a 2.4% annualized rate. That’s keeping up with inflation, for now.

The employment outlook continues to brighten as more Americans are vaccinated. While the fastest job growth has accrued in industries hardest hit by the pandemic, it is obvious that the combination of monetary and fiscal stimulus measures have raised employment across all industries. The labor market remains in a recovery phase, but we think it could re-enter an expansion phase a little more than a year from now.” 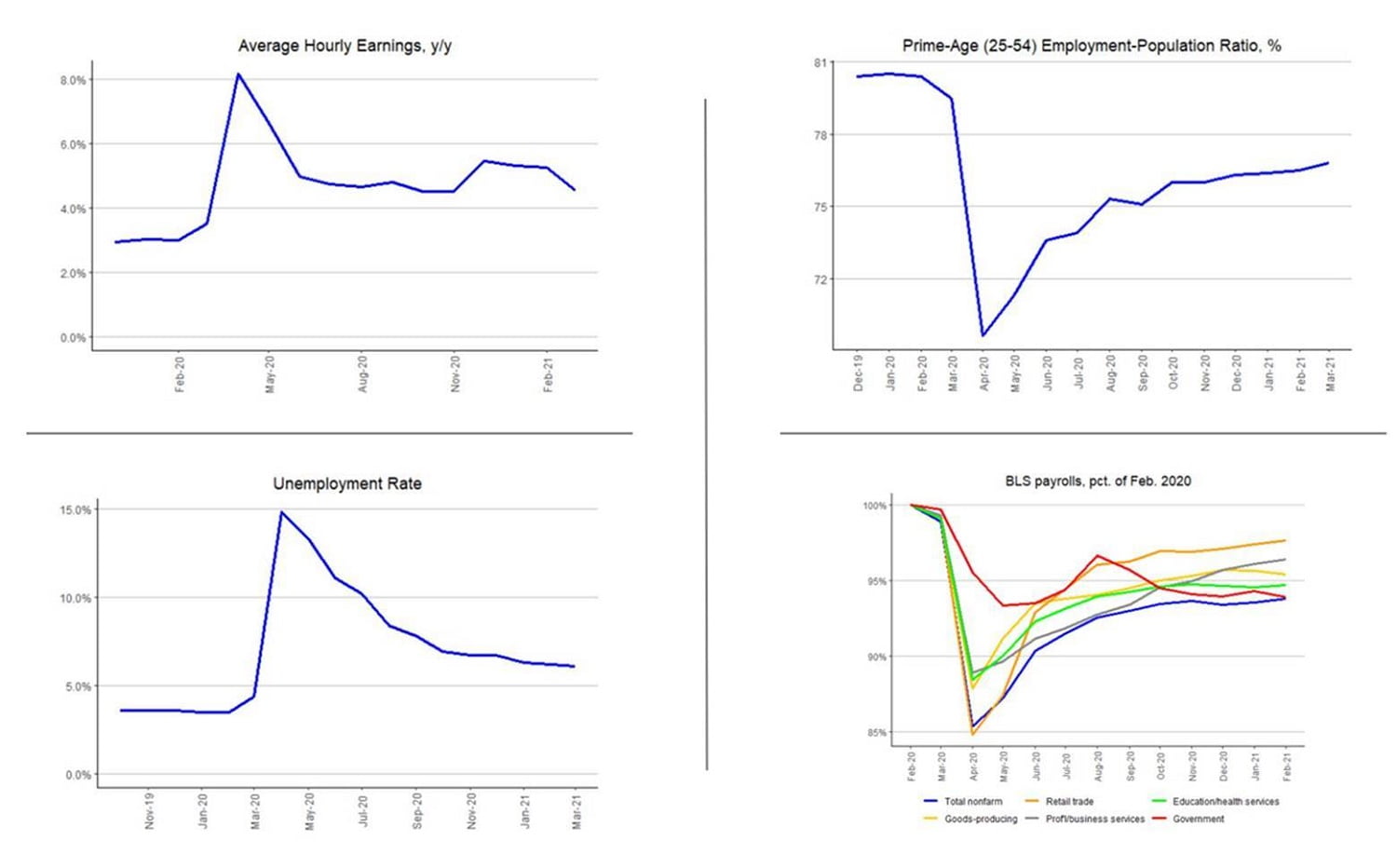