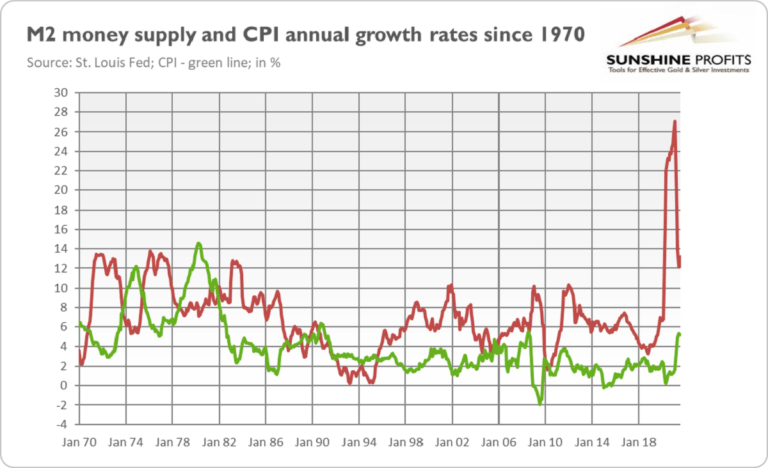 Powell maintains that inflation is transitory, but the monetary theory of inflation suggests otherwise. So, elevated inflation could stay with us!

Some economists downplay the risk stemming from elevated inflation, saying that comparisons to the 1970s style stagflation appear unfounded. They say that labor unions are weaker and economies are less dependent on energy than in the past, which makes inflationary risks less likely to materialize. Isabel Schnabel, Board Member of the European Central Bank, even compared the current inflationary spike to a sneeze, i.e., “the economy’s reaction to dust being kicked up in the wake of the pandemic and the ensuing recovery”. Are those analysts right?

Well, in a sense, they are. The economy is not in stagnation with little or no growth and a rising unemployment rate. On the contrary, the US labor market is continuously improving. It’s also true that both the bargaining power of workers and energy’s share in overall expenditure have diminished over the last fifty years.

However, general inflation is neither caused by wages nor energy prices. Higher wages simply mean lower profits, so although employees can consume more, employers can spend less. If wages are set above the potential market rates, then unemployment emerges - not inflation.

Similarly, higher energy prices affect the composition of spending, but not the overall monetary demand spent on goods and services. It works as follows: when the price of oil increases, people have to spend more money on oil (assuming the amount of consumed oil remains unchanged), which leaves less money available for other goods and services. So, the overall money spent on goods won’t change. As a consequence, the structure of relative prices will change, but widespread prices increases won’t happen.

In other words, Milton Friedman’s dictum remains valid: “Inflation is always and everywhere a monetary phenomenon in the sense that it is and can be produced only by a more rapid increase in the quantity of money than in output”. It’s quite a simple mechanism, even central bankers should be able to understand it: if the stock of goods remains unaltered while the stock of money increases, this, as Frank Shostak put it, “must lead to more money being spent on the unchanged stock of goods – an increase in the average price of goods”

Let’s look at the chart below, which displays the annual growth rates in the broad money supply (M2, red line) and in the CPI (green line). We can notice two important things. First, in the 1970s, the pace of broad money supply growth was relatively high, as it reached double-digit values at some point. As a consequence, inflation accelerated, jumping above 10% for a while. In other words, stagflation was born. 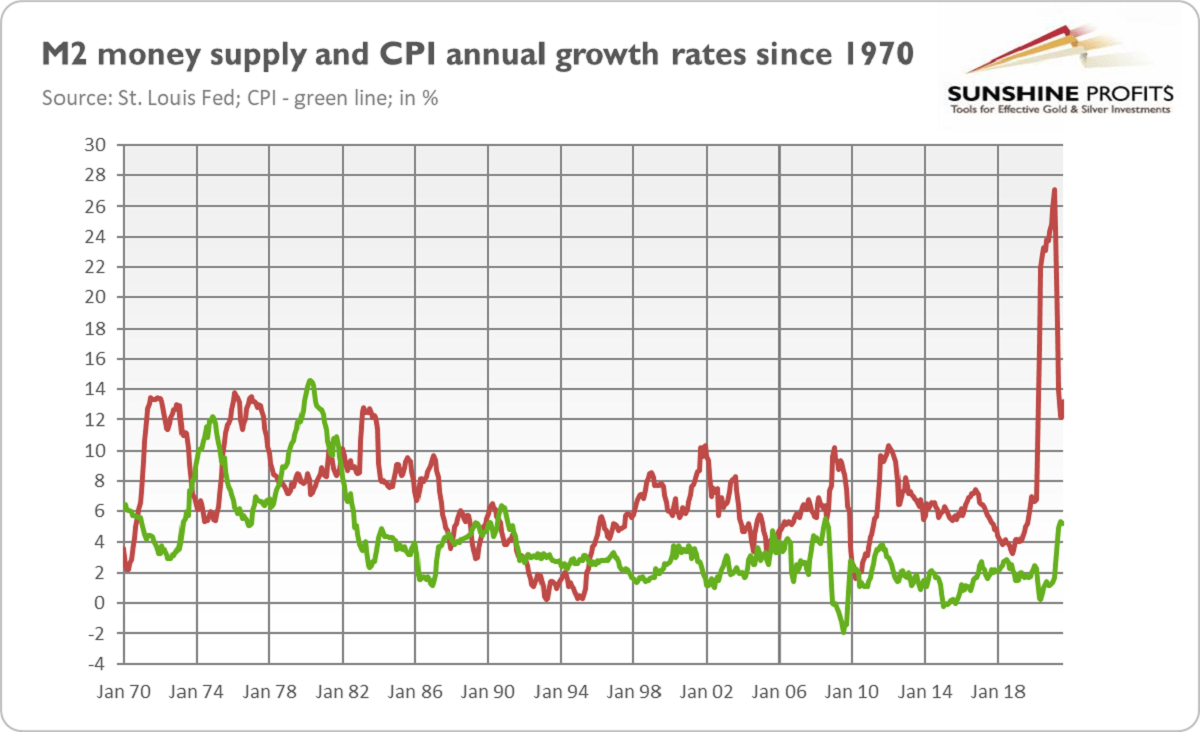 Since then, the rate of growth in the money supply never reached double-digit numbers on a prolonged basis, including the Great Recession, so high inflation never materialized. And then the pandemic came. In March 2020, the money supply growth rate crossed the 10% threshold and never came back. In February 2021, it reached its record height of 27.1%. The pace of growth in the M2 money aggregate has slowed down since then, dropping to a still relatively high rate of 13%. This is a rate that is almost double the pre-pandemic level (6.8% in February 2020) and the long-term average (7.1% for the 1960-2021 period ). So, actually, given the surge in the broad money supply and the monetary theory of inflation, rapidly rising prices shouldn’t be surprising at all.

Second, there is a lag between the money supply growth and the increase in inflation rates. That’s why some analysts don’t believe in the quantity theory of money – there is no clear positive correlation between the two variables. This is indeed true – but only when you take both variables from the same periods. The correlation coefficient becomes significant and positive when you take inflation rates with a lag of 18-24 months behind the money supply. As John Greenwood and Steve Hanke explain in opinion for Wall Street Journal,

If this relationship is true, then inflation won’t go away anytime soon. After all, the money supply accelerated in March 2020 and peaked in February 2021, growing at more than four times the “optimal” rate that would keep inflation at the 2-percent target, according to Greenwood and Hanke. In line with the monetarist description, the CPI rates accelerated in March 2021, exactly one year after the surge in the money supply. So, if this lag is stable, the peak in inflation rates should happen in Q1 2022, and inflation should remain elevated until mid-2022 at least.

What does it mean for the gold market? Well, if the theory of inflation outlined above is correct, elevated inflation will stay with us for several more months. Therefore, it’s not transitory, as the central bank tells us. Instead, inflation should remain high for a while, i.e., as long as the money supply growth won’t slow down and go back below 10% on a sustained basis. What’s more, the velocity of money, which plunged when the epidemic started, is likely to rise in the coming months, additionally boosting inflation.

So, I would say that Milton Friedman would probably forecast more persistent inflation than Jerome Powell, allocating some of his funds into the yellow metal. Gold is, after all, considered to be an inflation hedge, and it should appreciate during the period of high and rising inflation. Although so far gold hasn’t benefited from higher inflation, this may change at some point. Actually, investors’ worries about inflation intensified in October, and gold started to show some reaction to the inflationary pressure. My bet is that the next year will be better for gold than 2021: the Fed’s tightening cycle will already be inaugurated, and thus traders will be able to focus on inflation, possibly shifting the allocation of some of their funds into gold as a safe-haven asset.