Washington, D.C. – Keep Nine, a bipartisan organization that advocates for an independent Supreme Court, has had its Google ads suspended in an arbitrary move by the website. According to Google, the ad was disapproved because of a “Sensitive Event” surrounding the election, that event being Joe Biden’s inauguration as president Wednesday. 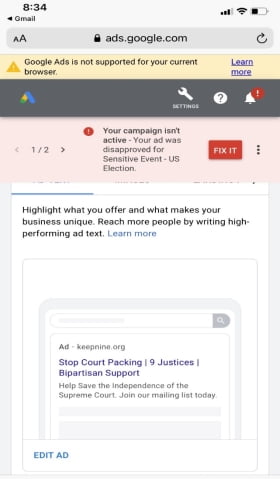 Keep Nine is comprised of former state Attorneys General and elected officials from both major American political parties. The fact Google would target such an organization, at a time when national leaders are calling for more unity, is heavy handed and irresponsible on the part of the tech giant. Since Google apparently believes bipartisan calls for a constitutional amendment is insensitive, Keep Nine needs the help of ordinary Americans to guarantee its message reaches every citizen who wants to make sure the Supreme Court remains independent and protect the checks and balances of our country.

A Downright Bizarre Move From Google

“This is beyond absurd. Keep Nine is and always has been an organization dedicated to bringing Americans together over an issue that we believe should concern Americans of all persuasions,” Keep Nine said in a statement. “The fact Google would feel the need to take down our ads on the grounds that it might somehow be insensitive to the inauguration is both arbitrary and downright bizarre. Moreover, it couldn’t be more ironic given that President Biden’s core message in his address was the need for more unity.”

“Since Google can’t be relied upon to help us reach concerned Americans, we’re asking those same Americans to help spread out message. Donate, tell your friends about us, and make sure people understand there’s a cause out there that is uniting Democrats and Republicans to tackle one of the great issues of our time.”