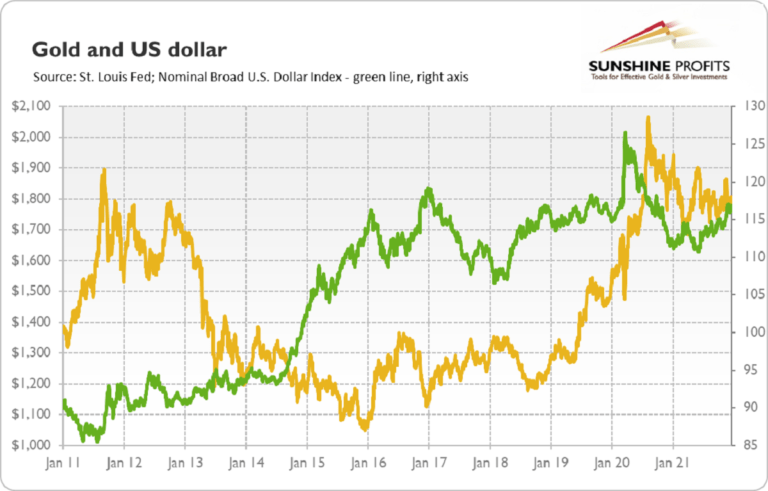 Gold’s fate in 2021 will be determined mainly by inflation and the Fed’s reaction to it.

In the epic struggle between chaos and order, chaos has an easier task, as there is usually only one proper method to do a job – the job that you can screw up in many ways. Thus, although economists see a strong economic expansion with cooling prices and normalization in monetary policies in 2022, many things could go wrong. The Omicron strain of coronavirus or its new variants could become more contagious and deadly, pushing the world into the Great Lockdown again. The real estate crisis in China could lead the country into recession, with serious economic consequences for the global economy. Oh, by the way, we could see an escalation between China and Taiwan, or between China and the US, especially after the recent test of hypersonic missiles by the former country.

Having said that, I believe that the major forces affecting the gold market in 2022 will be – similarly to last year’s – inflation and the Fed’s response to it. Considering things in isolation, high inflation should be supportive of gold prices. The problem here is that gold prefers high and rising inflation. Although the inflation rate should continue its upward move for a while, it’s likely to peak this year.

Indeed, based on very simple monetarist reasoning, I expect the peak to be somewhere in the first quarter of 2022. This is because the lag between the acceleration in money supply growth (March 2020) and CPI growth (March 2021) was a year. The peak in the former occurred in February 2021, as the chart below shows. You can do the math (by the way, this is the exercise that turned out to be too difficult for Jerome Powell and his “smart” colleagues from the Fed). 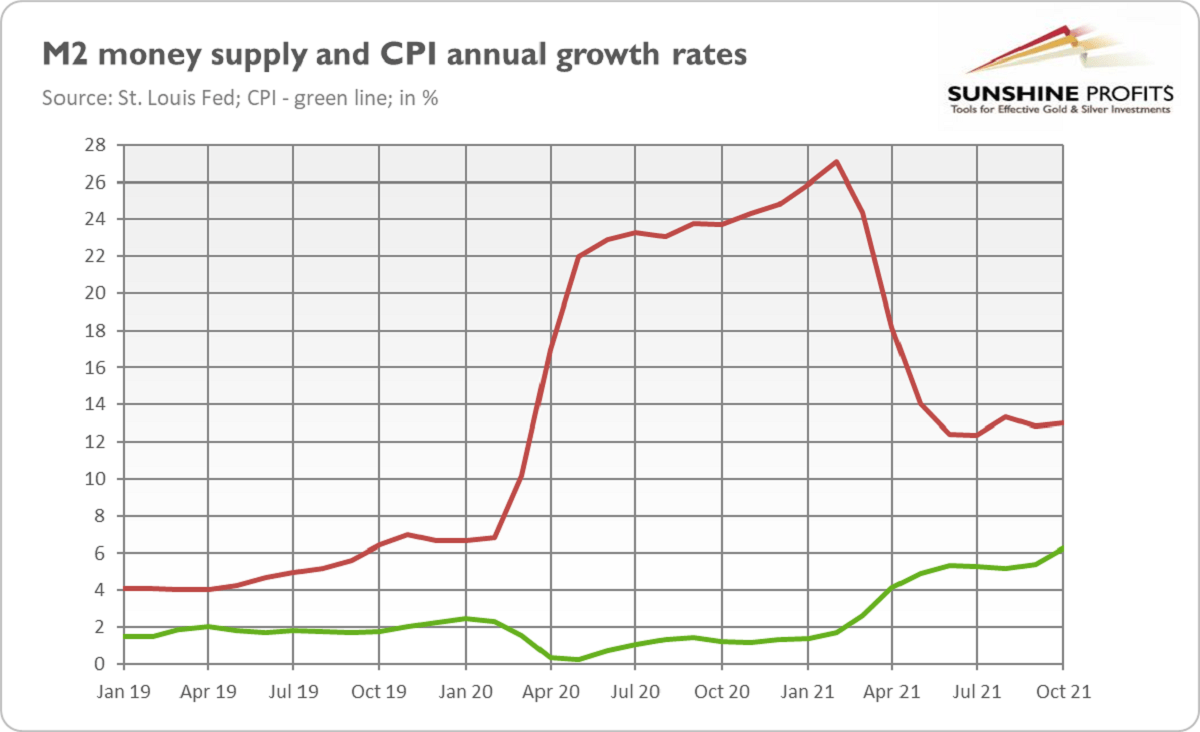 This is – as I’ve said – very uncomplicated thinking that assumes the stability of the lag between monetary impulses and price reactions. However, given the Fed’s passive reaction to inflation and the fact that the pace of money supply growth didn’t return to the pre-pandemic level, but stayed at twice as high, the peak in inflation may occur later.

In other words, more persistent inflation is the major risk for the economy that many economists still downplay. The consensus expectation is that inflation returns to a level close to the Fed’s target by the end of the year. For 2021, the forecasts were similar. Instead, inflation has risen to about 7%. Thus, never underestimate the power of the inflation dragon, especially if the beast is left unchecked! As everyone knows, dragons love gold – and this feeling is mutual.

US Consumer Prices To Rise

The Saxo Bank, in its annual “Outrageous Predictions”, sees the potential for US consumer prices to rise 15% in 2022, as “companies bid up wages in an effort to find willing and qualified workers, triggering a wage-price spiral unlike anything seen since the 1970’s”. Actually, given the fact that millions of Americans left the labor market – which the Fed doesn’t understand and still expects that they will come back – this prediction is not as extreme as one could expect. I still hope that inflationary pressure will moderate this year, but I’m afraid that the fall may not be substantial.

On the other hand, we have the Fed with its hawkish rhetoric and tapering of quantitative easing. The US central bank is expected to start a tightening cycle, hiking the federal funds rate at least twice this year. It doesn’t sound good for gold, does it? A hawkish Fed implies a stronger greenback and rising real interest rates, which is negative for the yellow metal. As the chart below shows, the normalization of monetary policy after the Great Recession, with the infamous “taper tantrum”, was very supportive of the US dollar but lethal for gold. 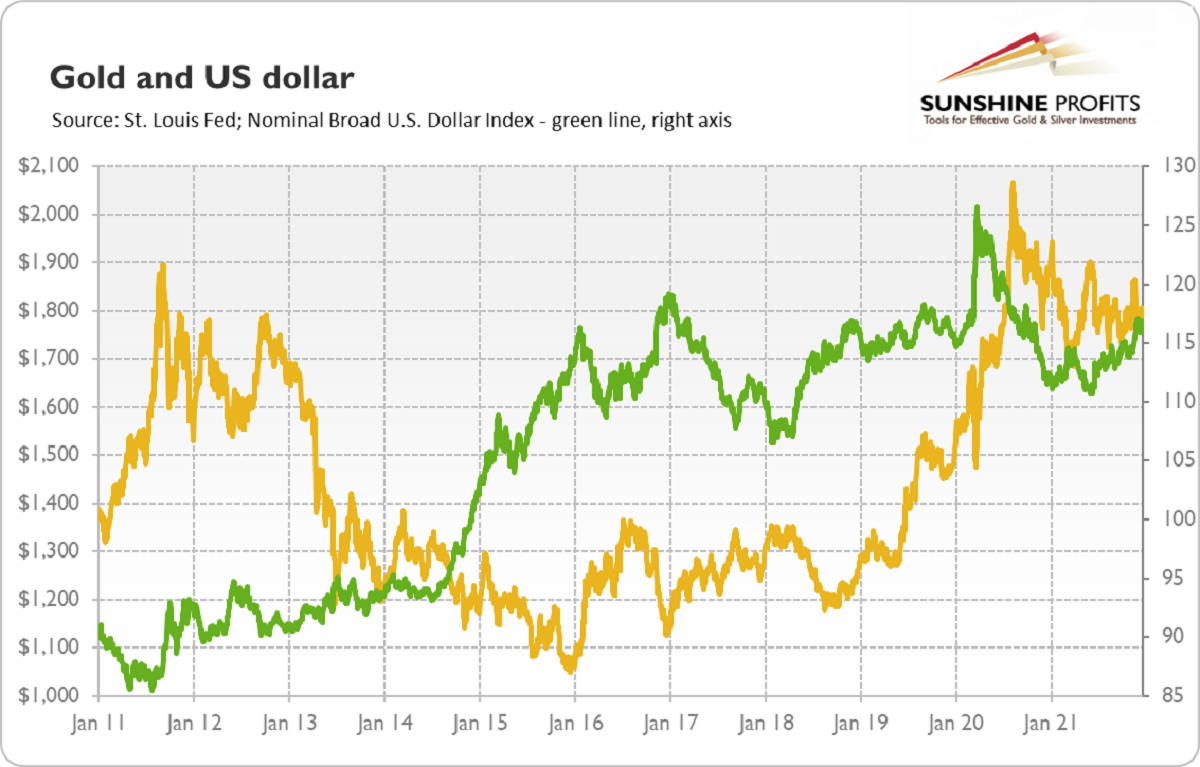 However, the price of gold bottomed in December 2015, exactly when the Fed hiked the interest rates for the first time after the global financial crisis. Markets are always future-oriented, so they often react more to expected rather than actual events. Another thing is that the Fed’s tightening cycle of 2015-2018 was dovish and the federal funds rate (and the Fed’s balance sheet) never returned to pre-crisis levels. The same applies to the current situation: despite all the hawkish reactions, the Fed is terribly behind the curve.

Last but not least, history teaches us that a tightening Fed spells trouble for markets. As a reminder, the last tightening cycle led to the reversal of the yield curve in 2019 and the repo crisis, which forced the US central bank to cut interest rates, even before anyone has heard of covid-19. Hence, the Fed is in a very difficult situation. It either stays behind the curve, which risks letting inflation get out of control, or tightens its monetary policy in a decisive manner, just like Paul Volcker did in the 1980s, which risks a correction of already-elevated asset prices and the next economic crisis. Such expectations have boosted gold prices since December 2015, and they could support the yellow metal today as well.