ValueWalk
Home Business After Your Recent High – Where To Now, Gold? 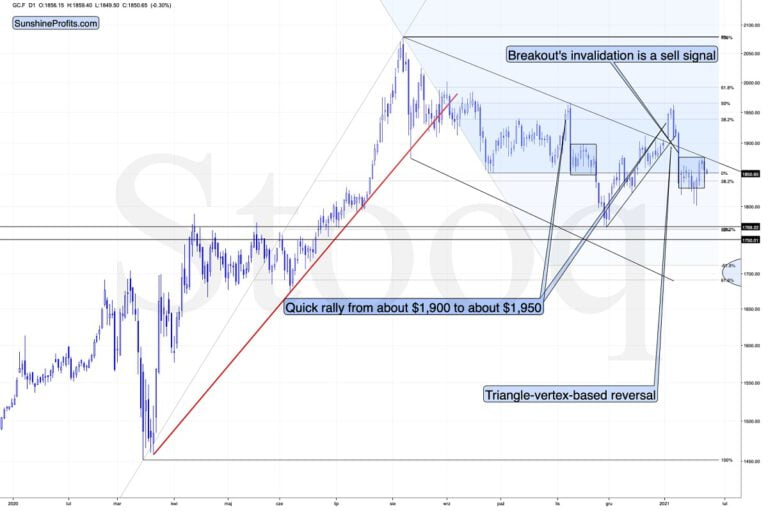 Gold is suffering a hang-over after it’s early January highs, while the EUR/USD pair is buckling – so when gold declines, where will its bottom be?

The Price Of Gold Fell On Friday

After injecting itself with Janet Yellen’s stimulus sentiment, gold came down from its highs on Friday (Jan. 22).

And like the GDX ETF, it’s important to put gold’s recent run into context. For starters, gold is still trading below its August declining resistance line, it topped at its triangle-vertex-based reversal point (which I warned about previously ) and the yellow metal remains well-off its January highs.

Looking at the chart below, we can see gold approaching the upper trendline of its November consolidation channel. 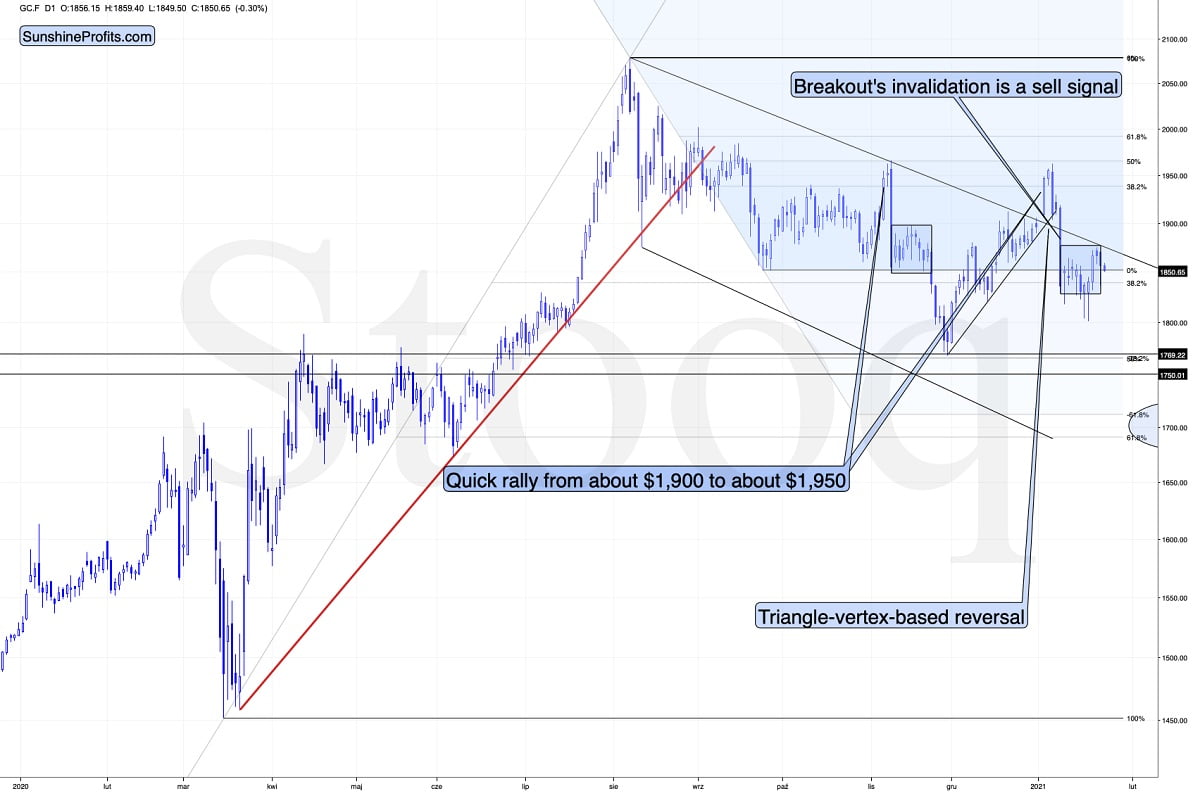 I marked the November consolidation with a blue rectangle, and I copied it to the current situation, based on the end of the huge daily downswing. Gold moved briefly below it in recent days, after which it rallied back up, and right now it’s very close to the upper right corner of the rectangle.

This means that the current situation remains very similar to what we saw back in November, right before another slide started – and this second slide was bigger than the first one. I wrote about this previously (Jan. 21), saying that there’s a good reason for gold to reverse any day (or hour) now.

And what happened last Friday?

Well, gold fell by 0.52% as the Yellen -led intoxication began to wear off. Gold also continues to decline in today’s pre-market trading, despite a small move lower in the USD Index.

Also adding to the upswing, one of the most popular gold indicators – the stochastic oscillator (see below) dipped below 20 last week. Itching to move off oversold levels, the yellow metal responded in kind. However, if you analyze the green arrows below (at the bottom of the chart), you can see that the first green arrow has a red arrow directly above it (marking gold’s November top).

Currently, the stochastic oscillator is right near that level, and with November acting as a prelude, the yellow metal could suffer a similar swoon in the coming days or weeks. 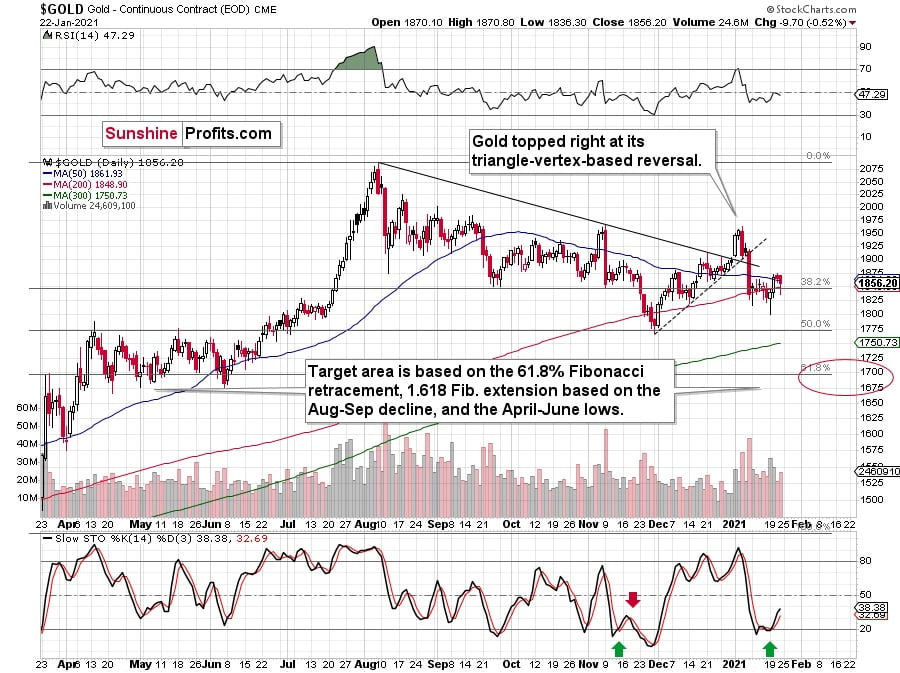 This means that if the shape of the price moves continues to be similar, the next short-term move lower could be bigger than what we saw so far in January and bigger than the decline that we saw in the second half of November. This is yet another factor that points to the proximity of $1,700 as the next downside target.

Moving on to cross-asset implications, Yellen’s dollar-negative comments tipped over a string of dominoes across the currency market. Ushering the EUR /USD higher, the boost added wind to the yellow metal’s sails.

And because the EUR/USD accounts for nearly 58% of the movement in the USD Index, the currency pair is an extremely important piece of gold’s puzzle. However, beneath the surface, the euro is already starting to crack. After breaching critical support last week, Yellen’s comments basically saved the currency, as a rally in the EUR/USD was followed by a rally in the EUR/GBP.

However, with Eurozone fundamentals drastically underperforming the U.S. (and many other countries as well), a come-to-Jesus moment could be on the horizon.

In summary, Friday’s detox – with the EUR/USD flat-lining and gold moving lower – could be a precursor to a rather messy withdrawal. Right now, the euro is hanging on for dear life, as technicals, fundamentals and cross-currency signals all point to a weaker euro. As a result, due to gold’s strong positive correlation with the EUR/USD, the yellow metal is unlikely to exit the battle unscathed.

One of the reasons is the 61.8% Fibonacci retracement based on the recent 2020 rally, and the other is the 1.618 extension of the initial decline. However, there are also more long-term-oriented indications that gold is about to move to $1,700 and more likely, even lower.

(…) gold recently failed to move above its previous long-term (2011) high. Since history tends to repeat itself, it’s only natural to expect gold to behave as it did during its previous attempt to break above its major long-term high.

And the only similar case is from late 1978 when gold rallied above the previous 1974 high. Let’s take a look at the chart below for details (courtesy of chartsrus.com)

This is in perfect tune with what we described previously as the downside target while describing gold’s long-term charts: 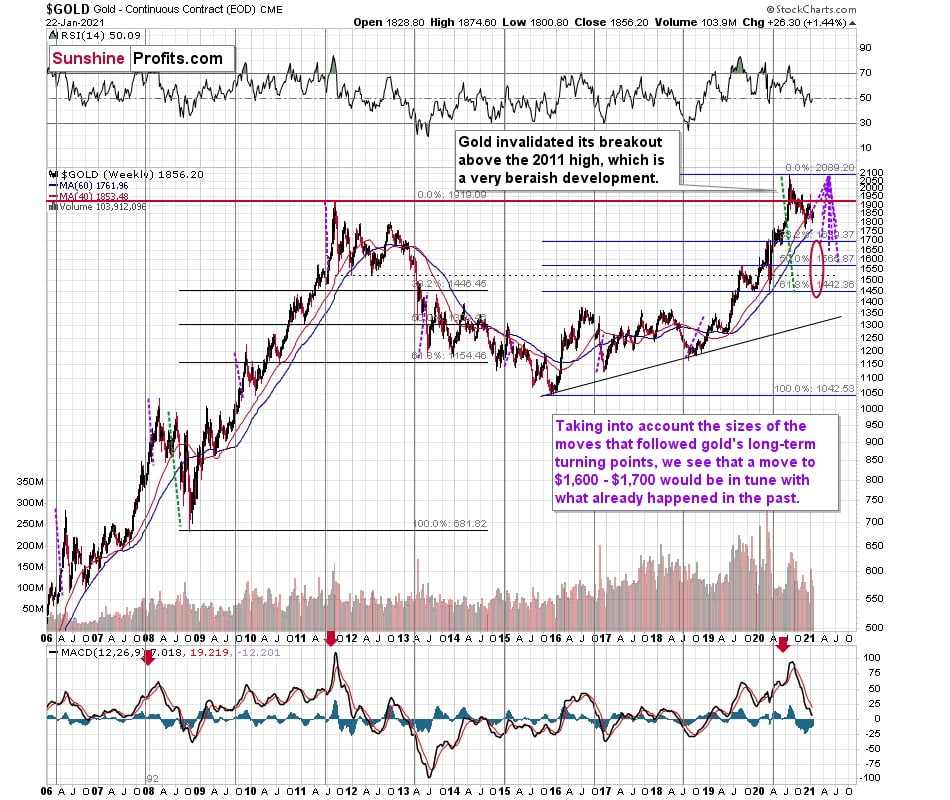 A Likely Rebound In Gold

The chart above shows exactly why the $1,700 level is even more likely to trigger a rebound in gold, at the very minimum.

Before looking at the chart below (which is very similar to the chart above, but indicates different RSI, volume, etc.), please note the – rather obvious – fact: gold failed to break above its 2011 highs. Invalidations of breakouts are sell signals, and it’s tough to imagine a more profound breakout that could have failed. Thus, the implications are extremely bearish for the next several weeks and/or months. 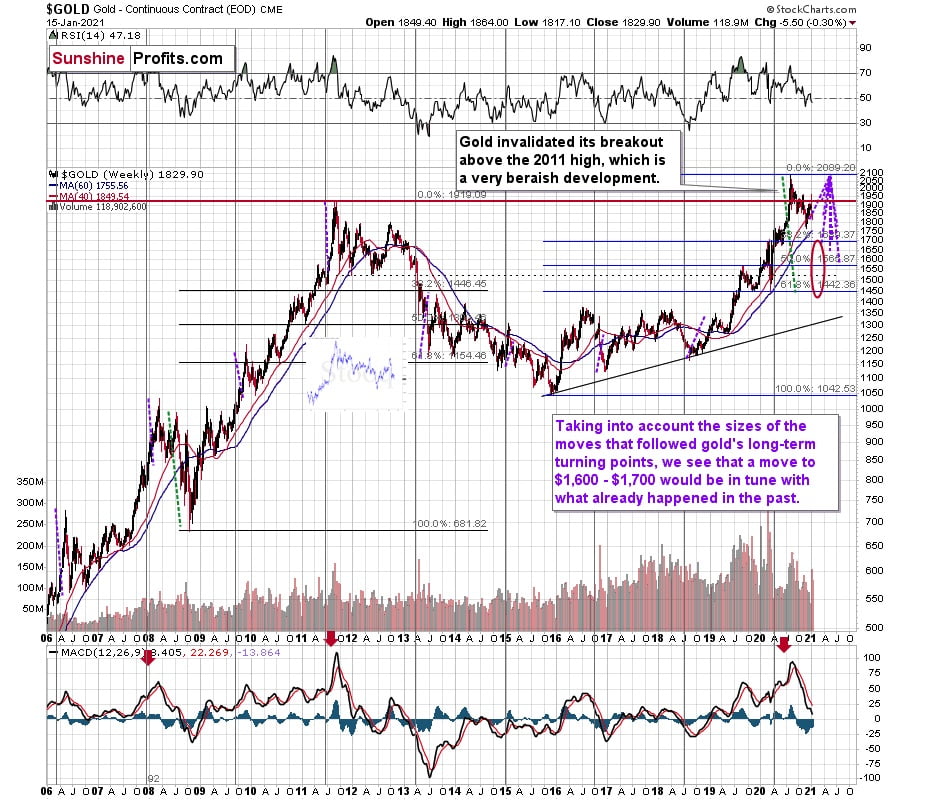 The odd thing about the above chart is that I copied the most recent movement in gold and pasted it above gold’s 2011 – 2013 performance. But – admit it – at first glance, it was clear to you that both price moves were very similar.

And that’s exactly my point. The history tends to rhyme and that’s one of the foundations of the technical analysis in general. Retracements, indicators, cycles, and other techniques are used based on this very foundation – they are just different ways to approach the recurring nature of events.

The History Repeats Itself

However, every now and then, the history repeats itself to a much greater degree than is normally the case. In extremely rare cases, we get a direct 1:1 similarity, but in some (still rare, but not as extremely rare) cases we get a similarity where the price is moving proportionately to how it moved previously. That’s called a market’s self-similarity or the fractal nature of the markets. But after taking a brief look at the chart, you probably instinctively knew that since the price moves are so similar this time, then the follow-up action is also likely to be quite similar.

What did gold do back in 2013 at the end of the self-similar pattern? Saying that it declined is true, but it doesn’t give the full picture - just like saying that the U.S. public debt is not small. Back then, gold truly plunged. And before it plunged, it moved lower in a rather steady manner, with periodic corrections. That’s exactly what we see right now.

Finally, please note the strong sell signal from the MACD indicator in the bottom part of the chart. The only other time when this indicator flashed a sell signal while being so overbought was at the 2011 top. The second most-similar case is the 2008 top.

The above-mentioned self-similarity covers the analogy to the 2011 top, but what about the 2008 performance?

If we take a look at how big the final 2008 decline was, we notice that if gold repeated it (percentage-wise), it would decline to about $1,450. Interestingly, this would mean that gold would move to the 61.8% Fibonacci retracement level based on the entire 2015 – 2020 rally. This is so interesting, because that’s the Fibonacci retracement level that (approximately) ended the 2013 decline.

History tends to rhyme, so perhaps gold is going to decline even more than the simple analogy to the previous turning points indicates. For now, this is relatively unclear, and my target area for gold’s final bottom is quite broad.