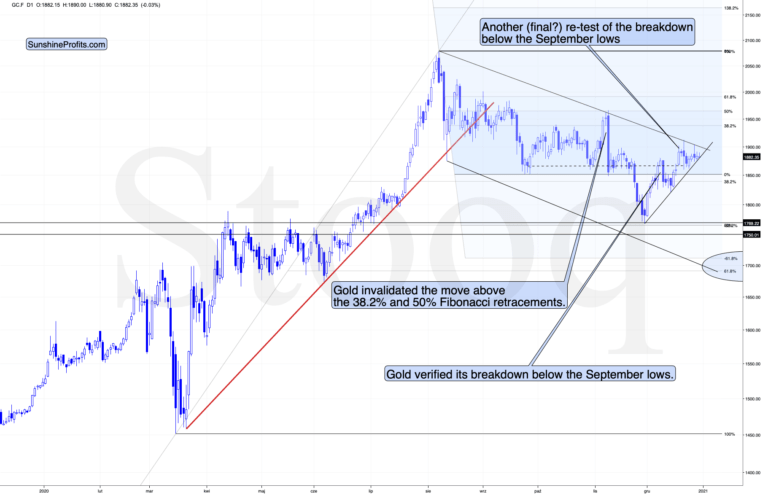 As of Wednesday (Dec. 30) morning, gold is range trading and remains more or less flat as it seeks momentum. As we wait for the precious metals to act on a catalyst, let’s also take a look at the Euro’s relation to the US Dollar and how both impact gold.

Gold Doesn't React To The US Dollar Index Slipping 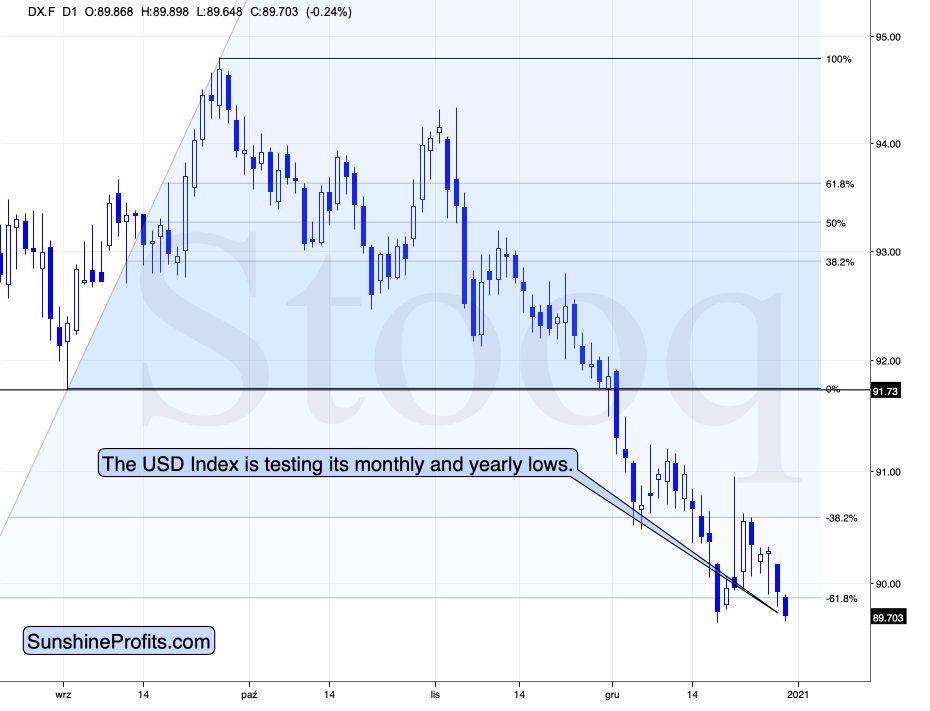 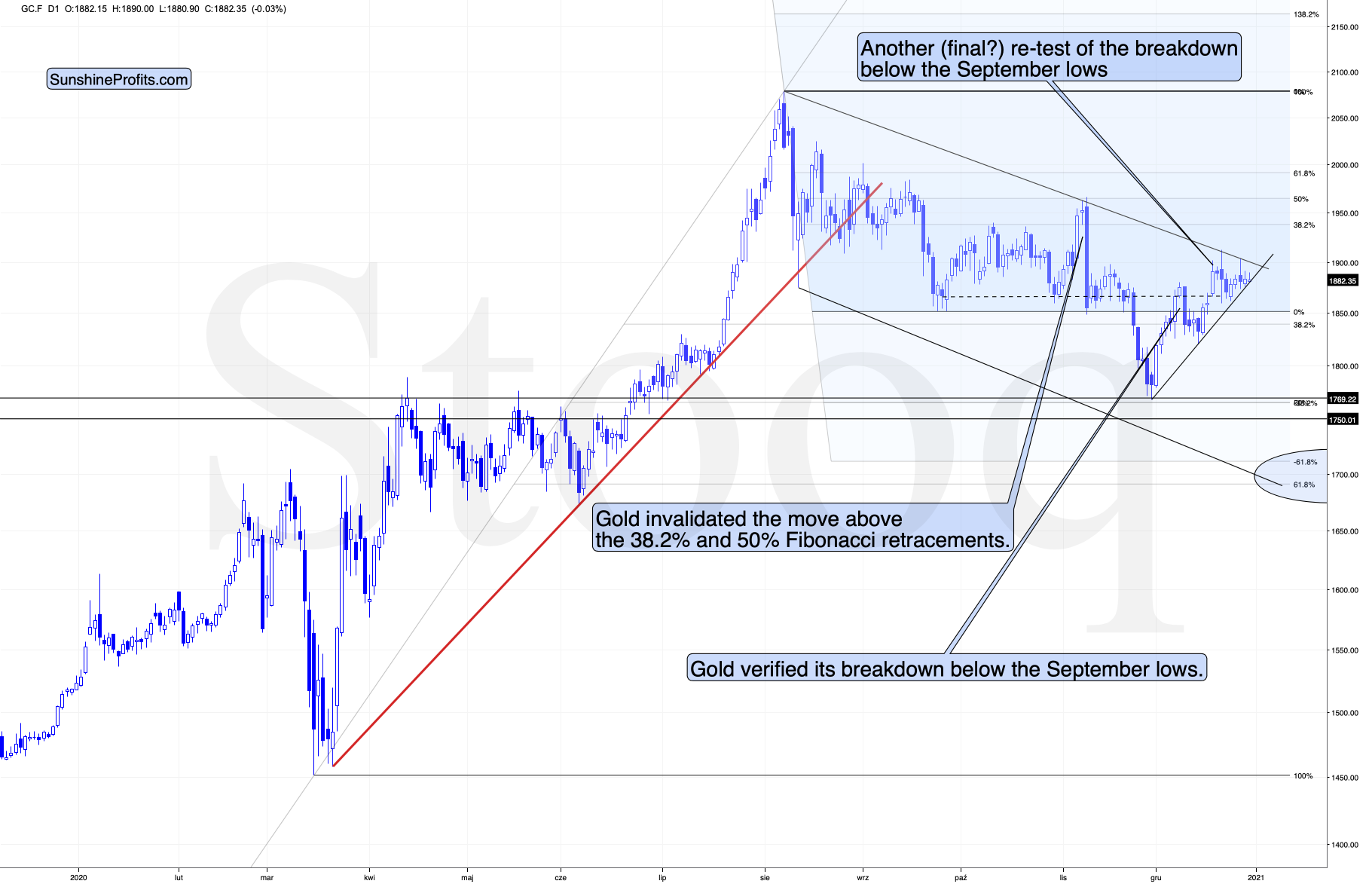 Gold is about $30 below its monthly high, and about $200 below the yearly low.

After a temporary breakout, gold is back below its 2011 high. The breakout above the latter was clearly invalidated. 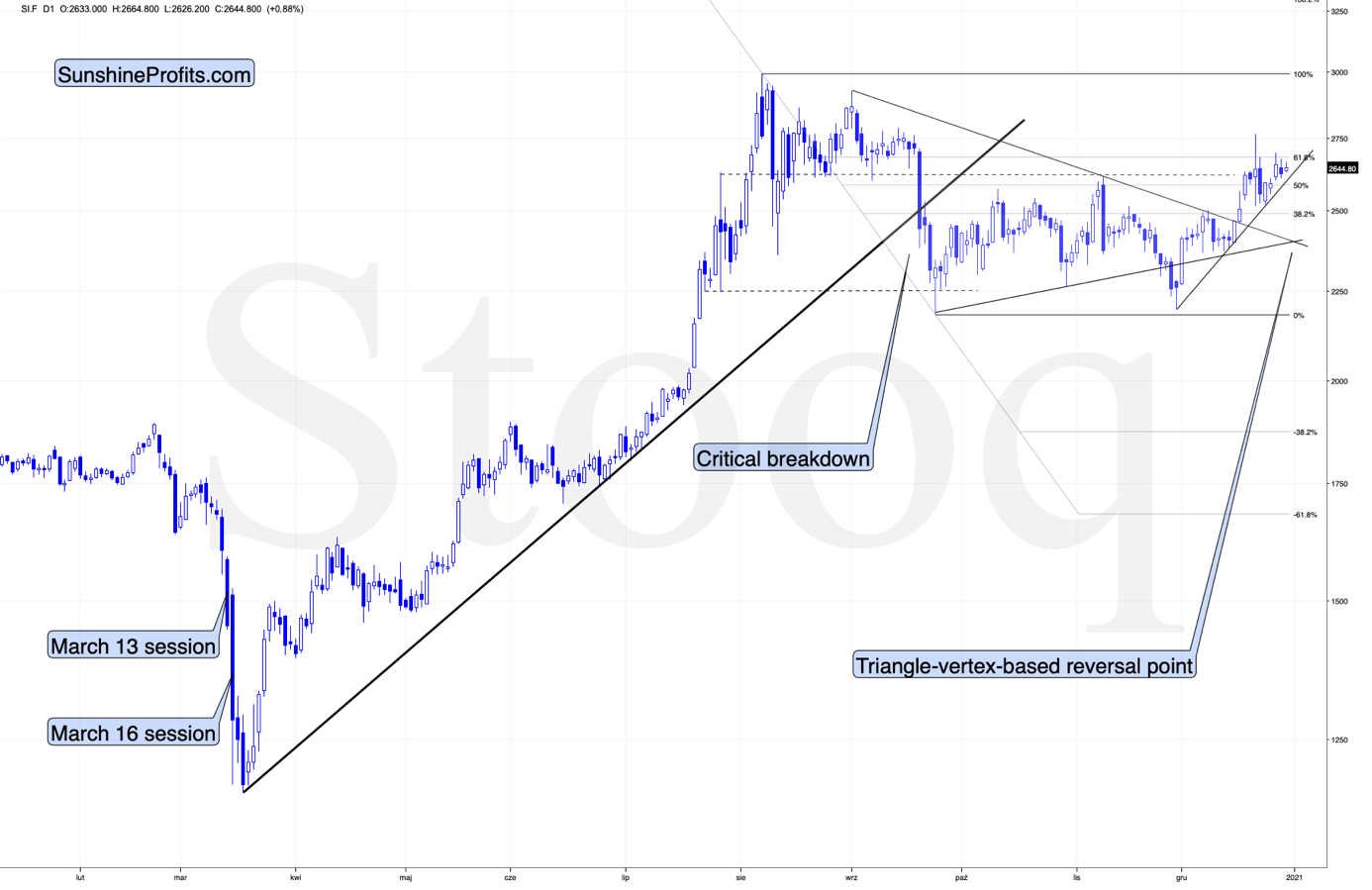 Silver is not even close to its 2011 high, and while it’s relatively strong compared to gold and miners on a short-term basis, it’s not at its December high right now. It’s also a few dollars below its yearly high. 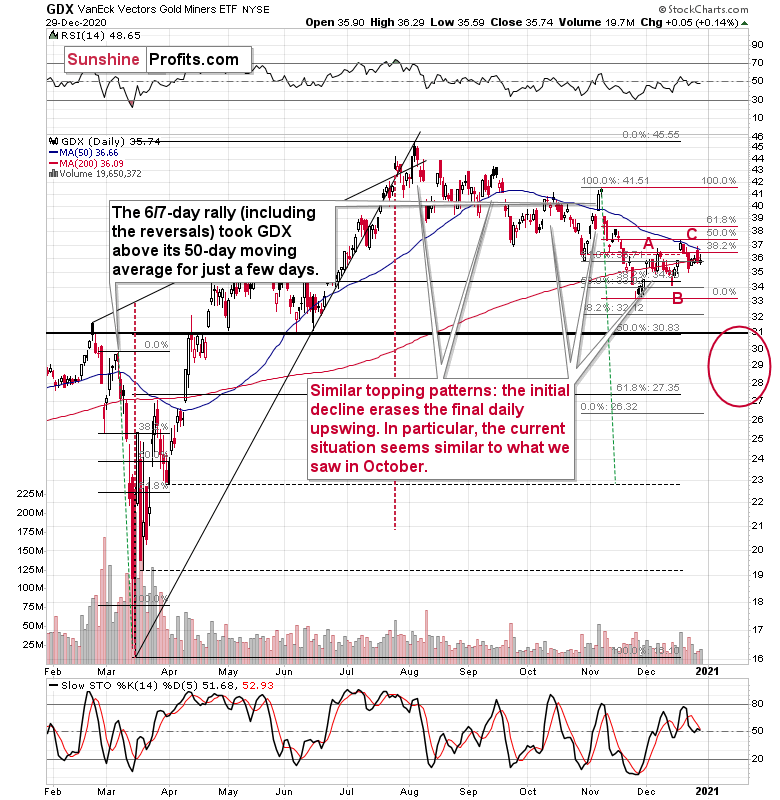 We see that the GDX ETF moved lower once again despite the intraday attempt to rally. During Monday’s (Dec. 28) session, miners once again moved back to their 50-day moving average and… Once again verified it as resistance. The implications are bearish.

Let’s get back to silver once again. On its chart, you can see a triangle-vertex-based reversal at the end of the year. Before the price moves close to the reversal, it’s relatively unclear what kind of implications a given reversal is likely to have. Well, including today’s (Dec. 30) session, there remain only two sessions until the end of the year, so we’re likely to see the reversal shortly.

Based on the likelihood that the next big move is going to be to the downside, it would fit the overall picture more if the upcoming reversal was a top, not a bottom. A bottom would imply a rally in the following days or weeks, and the relative performance (as described above) along with other factors continues to favor a bigger decline.

This means that we might not see a meaningful decline for a few more days, and we might even see one final move higher before the top is formed. This could be something that takes place in silver only, or something that we see in gold and miners as well. Still, I don’t expect it to be really significant in case of the latter. They are underperforming the metals, after all.

Before summarizing, let’s discuss the US Dollar Index’s main part – the EUR/USD currency pair in greater detail. After all, this pair often moves in tandem with gold.

John Maynard Keynes once said, “Markets can remain irrational longer than you can remain solvent.”

And right now, EUR/USD is putting his theory to the test.

Because the euro accounts for nearly 58% of the movement in the US Dollar Index, its rise (and likely fall) will determine if/when the war is won.

But brimming with confidence and unwilling to wave the white flag, the EUR/USD has been green for five straight days and has rallied during nine of the last 12 trading days. And while sentiment and momentum are warriors that don’t die easy, the euro is losing fundamental soldiers left and right.

Please see the chart below: 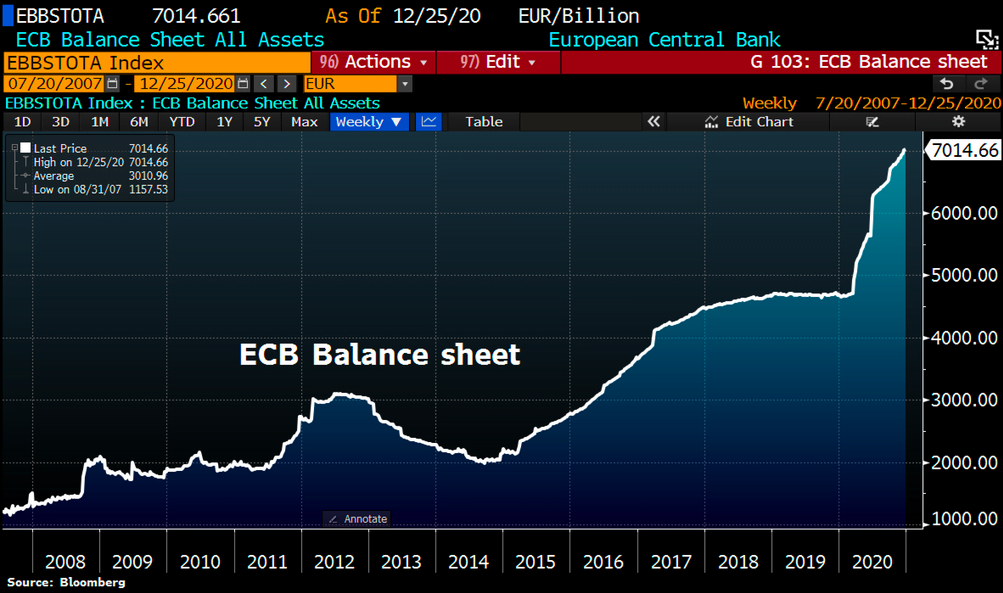 And why is this necessary?

Because the Eurozone economy is in free-fall.

Remember, currencies trade on a relative basis. Thus, a less-bad U.S. economy is good news for the U.S. dollar. 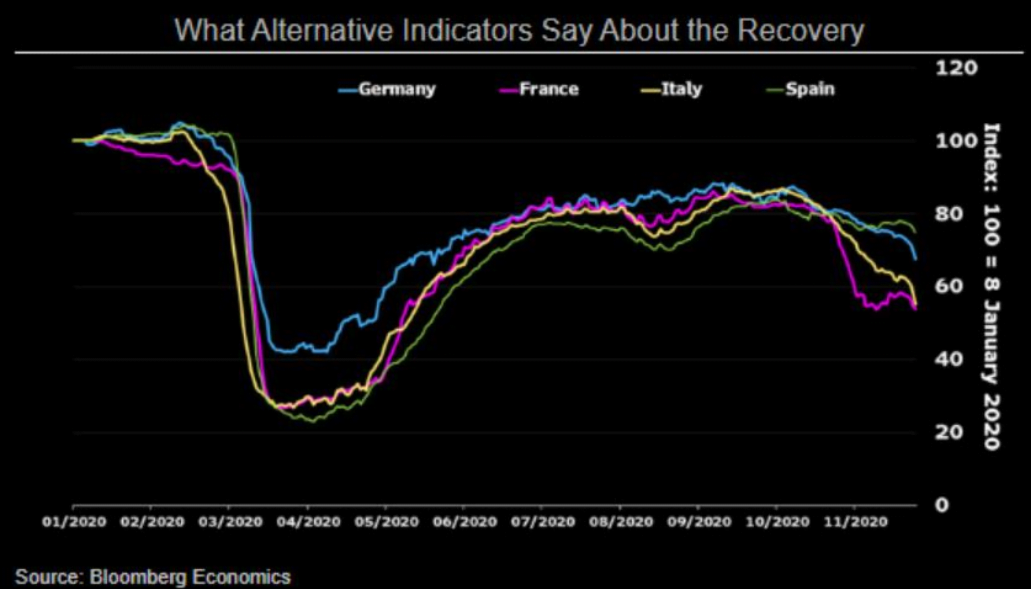 And underpinning the irrationality, the deceleration is happening as the euro is strengthening.

Well, considering Spain’s retail sales dipped further into negative territory on Monday (Dec. 28) – coming in at – 5.8% vs. – 5.3% expected – the data speaks for itself. 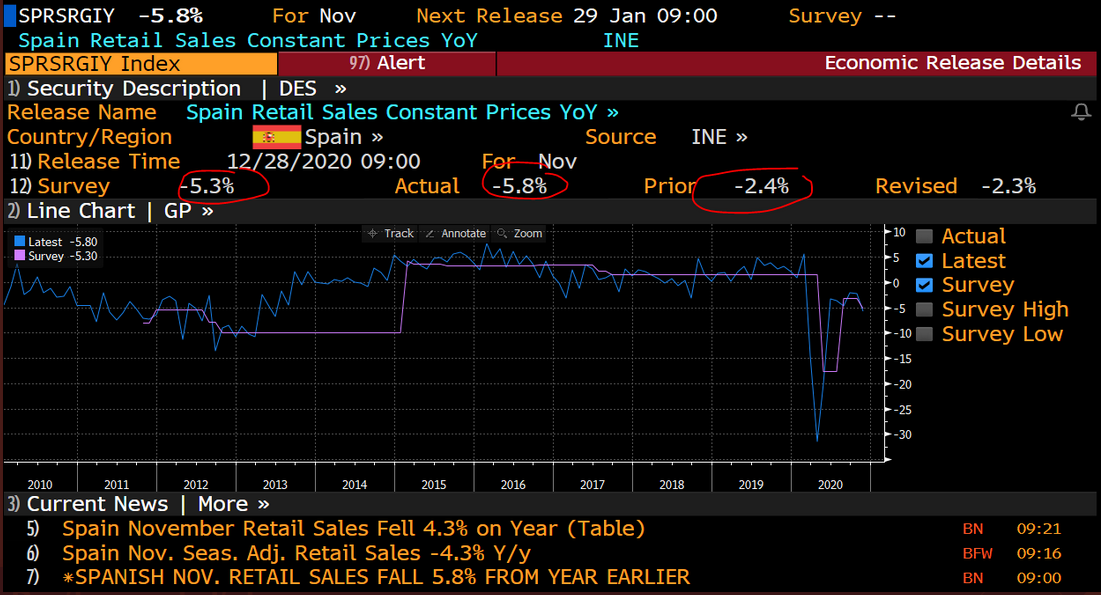 The bottom line is: the euro bulls are fighting a war they’re unlikely to win. And as the fundamental data worsens, it’s analogous to a platoon losing more and more soldiers. Eventually, the infantry runs out of reserves and it’s time to wave the white flag.

And then what happens?

Well, then history tries to explain how it all went wrong.

Thank you for reading our free analysis today. Please note that the above is just a small fraction of today’s all-encompassing Gold & Silver Trading Alert. The latter includes multiple premium details such as the target for gold that could be reached in the next few weeks. If you’d like to read those premium details, we have good news for you. As soon as you sign up for our free gold newsletter, you’ll get a free 7-day no-obligation trial access to our premium Gold & Silver Trading Alerts. It’s really free – sign up today.