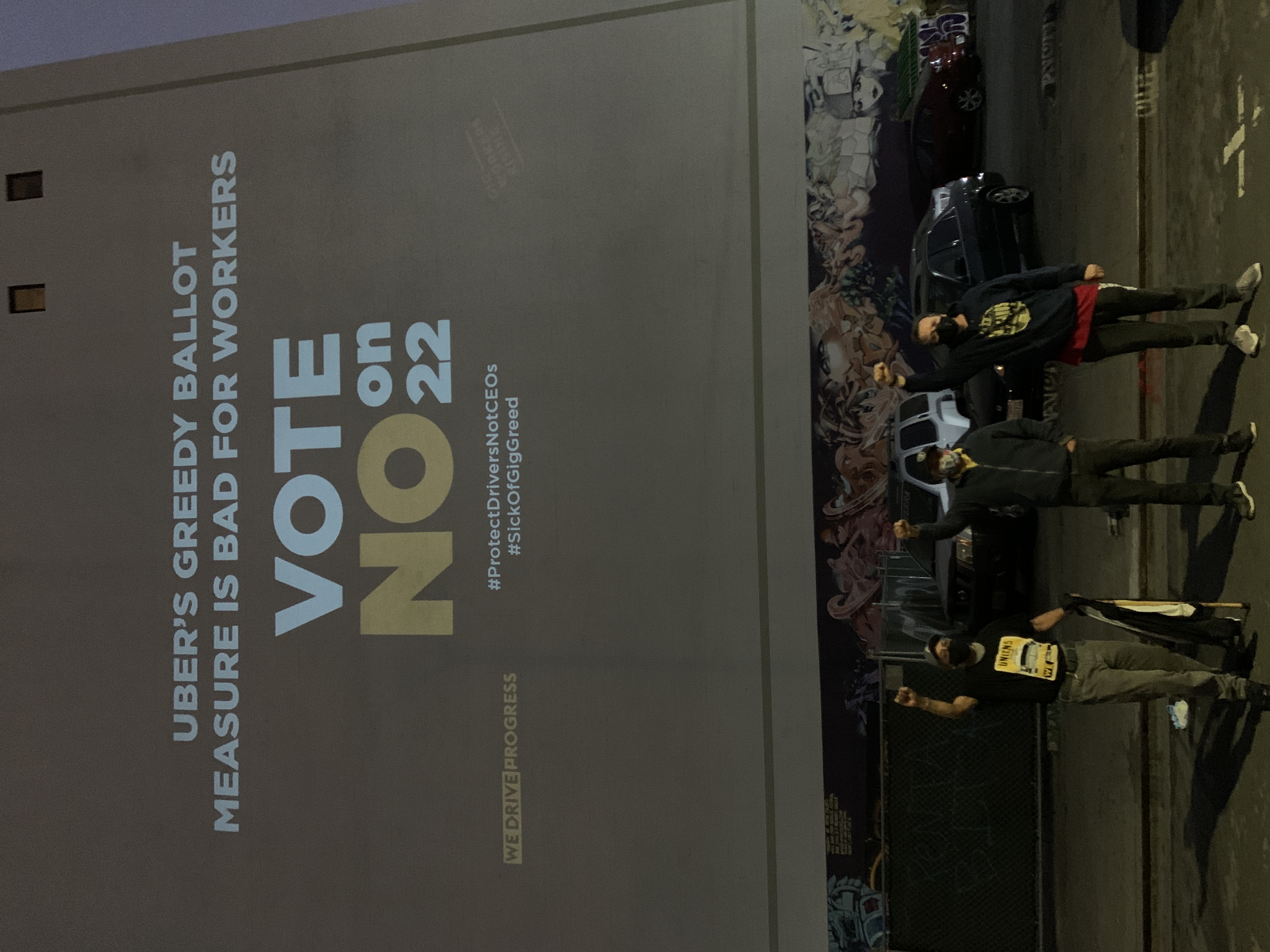 #WorkersCantWait: Gig-Workers Across CA Protest in Advance of Judge’s Ruling

Uber & Lyft continue to break CA law - a federal judge’s ruling may put an end to that.

Photos via We Drive Progress and Gig Workers Rising

(Oakland, CA)— Today at 11:30AM, approximately 50 app workers with Gig Workers Rising, Rideshare Drivers United & We Drive Progress hosted a People’s Hearing at the Oakland Uber Greenlight hub. Workers demanded that gig companies immediately begin obeying Assembly Bill 5 (AB5), granting workers the employee status and benefits they are legally entitled to under the new California state law. Workers also called on the companies to provide free PPE to their frontline workers and drop the $110 million Prop 22 ballot measure funded by Uber, Lyft and DoorDash. As a part of the statewide day of action, drivers with Mobile Workers Alliance and Rideshare Drivers United echoed the same demands at a protest at the Los Angeles Lyft hub.

Thursday’s Oakland and LA based actions took place just hours before a key injunction hearing in the  California Attorney General’s lawsuit against Uber and Lyft. Attorney General Xavier Becerra, and a coalition of city attorneys, will argue that Uber and Lyft must immediately comply with AB5. Uber and Lyft are expected to argue that they shouldn’t be required to follow the law until after voters weigh in on Proposition 22 in the November election. Prop 22 would exempt the companies from AB5 and other foundational state labor laws. Becerra argues that the harm currently facing drivers is so grave that it would be neglectful to wait until the end of the current litigation. The law is clearly on the workers’ side.

“We are holding this hearing today because the people are demanding accountability from Uber and Lyft. We demand that Uber and Lyft stop breaking the law. Right now, these billion dollar corporations are denying us the employee status, rights and benefits that we are legally owed. We, as their frontline workers, are left without PPE, health insurance or paid sick leave in the midst of a deadly pandemic. This must end now. Uber and Lyft, drop your Prop 22 ballot measure and obey the law.” said Cherri Murphy, a Gig Workers Rising and Rideshare Drivers United member and Lyft driver based in Oakland.

“Workers like me have rights, even if Uber and Lyft refuse to respect them. We have a right to sick days, unemployment, fair wages, overtime, paid family leave, and more. We’re speaking out because despite Uber and Lyft continuing to fight drivers in court and their expensive ballot measure to strip us of what we deserve, drivers are committed to protecting our rights as employees. The app companies can spend hundreds of millions to fight us, but we have strength in our numbers and we won’t back down,” said Saori Okawa, a We Drive Progress member and Uber driver from San Francisco.

“The law says that rideshare drivers are employees who are entitled to basic labor rights. If it takes a court order for gig companies to follow the law and show us the respect we deserve, then that’s what we’ll keep fighting for,” said Chris Arellano, a driver and organizer with Rideshare Drivers United-San Francisco. “We have drivers coming from everywhere in California to stand shoulder to shoulder, albeit six feet apart, to fight for these rights. Uber and Lyft can’t match that, and we are confident that our voices will be heard.”

On Wednesday evening, the day before the hearing, drivers from We Drive Progress and Gig Workers Rising took to the streets to spread the word about Prop 22 and the devastating effects it would have on drivers. Around downtown Oakland and near Lake Merritt, drivers used a projector to put huge images up on building walls detailing the harm Prop 22 would cause and calling on people in the community to reject this expensive and misleading ballot initiative by the app companies.

Gig Workers Rising is a campaign supporting and educating app and platform workers who are organizing for better wages, working conditions, and respect. @GigWorkersRise

We Drive Progress is a movement of app-based workers behind the wheel of every rideshare trip across Northern California. We are part of a coalition of over 24,000 drivers statewide who are responsible for the billions that companies like Uber, Lyft, and their investors pocket every year. We’re uniting to win our union and a better life for ourselves and our loved ones. @WeDriveProgress

Rideshare Drivers United is a driver-led organization with more than 18,000 drivers in the state of California. @_drivers_united