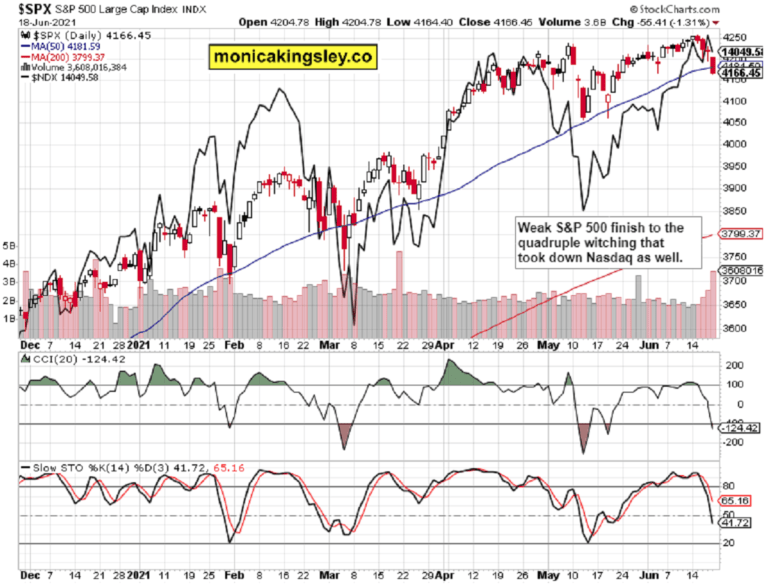 As resilient as it had been before Wednesday, S&P 500 met selling pressure on Friday, including the best performing tech sector. Bullard‘s comments on the „inflation surprise“ and first rate hike before 2022 is over – are they full of hot air, testing the waters before taper, or serious intent? Given the ease with which precious metals and then select commodities such as copper or soybeans tumbled, rate hikes might appear to be baked in the cake now – but in reality, it‘s the unyielding inflation that would prove rather persistent than transitory.

The Fed did the bare minimum, acknowledging inflation in passing, implying it would go away on its own. But it‘s more complicated than that – bank credit creation isn‘t strong, and had been declining before bond yields bottomed in Aug 2020. Are banks reluctant to lend, or customers to borrow? The result of production not ramping up as wildly as expected (reopening trades) is compounding the disturbed supply chains and commodity prices rising (cost-push inflation). Add to that job market pressures, and you have a recipe for inflation being more transitory than originally thought. In other words, cyclical and structural as import-export prices hint at too..

Money in the system isn‘t flowing into production or capacities expansion – inventories have instead been drawn down, and need to be replenished. Just as I have written the prior Monday, that would be putting upside pressure on prices as much Europe awakening or hard hit countries such as India springing back. So, fresh money results in excess liquidity, trapped in the system, and flowing to bonds, which explains the Fed‘s need to act and fix repo rate at 0.05%. So much for the recent spike in Treassuries – this whiff of „almost deflation“ has it wrong, and yields will revert to rising – regardless of when exactly (or if) other parts of the intended $6T stimulus package get enacted.

Sure, the Fed actions have shortened the (sideways) lull in Treasuries, made the dollar spike, but haven‘t changed the underlying dynamic of the free market not willing to pick up the slack in credit creation should the Fed indeed taper. Chances are, they would still taper, but later in 2022 – such was and still is my expectation, with bank credit creation being (hopefully) the key variable on their watch as a deciding factor. In the meantime, the inflation problem will get even more embedded – not a fast galloping inflation or hyperinflation, but a serious problem raising its ugly head increasingly more through the years to come.

In short, the Fed played the dot plot perceptions game which amounts to no serious attempt to nip inflation in the bud. The markets (precious metals, commodities) got thrown off prior trends, but will see through the bluff that can‘t be followed by actions. The inflation trades (and by extension modest rise in yields as we drift towards 2.50% on the 10-year before that tapering actually starts, with positive consequences for financials and cyclicals) haven‘t been killed off, and will reassert themselves when the markets test the Fed (and they will). To be clear, I am calling for persistently elevated (not hyper) inflation (PCE deflator readings coming soon) with the 10-year yield reverting to its more usual trading range – so essential to financial repression reducing the real value of all obligations.

Keep also the following macroeconomic point on your mind – inflation isn‘t strong enough currently to knock off the P&L to make stocks roll over, we‘re still in a reflation and commodities super bull market. Lower GDP growth potential equals growth (tech) doing fine, but expect the stock market leadership to broaden yet again to include the beaten down industrials and financials.

So, there is no taper (wait for Jackson Hole), but we‘re enduring almost a taper tantrum, and stocks might need to test the 4,050 – 4,100 broad support zone that has more chances of holding than not. Doing so, it would confirm that value is far from down and out, and that we have further to run. As menacing as the VIX looks, the put/call ratio is already positioned on a rather cautious side, meaning that no great S&P 500 correction is starting here. It doesn‘t look so currently – the dislocation in credit markets (high yield end) appears temporary.

Gold and silver are being hit by the hawkish Fed bets, and so are the inflation expectations. Miners are buying into it, meaning that the miners to gold ratio is threatening a downswing on the weekly chart. Has the true downtrend in the metals started? The yellow metal is actually sitting at two strong supports, and silver to gold ratio remains still in an uptrend. Simply put, the last 3 days trading action appears too exagerrated given the bond market disequilibrium amplifying the dollar upswing. Sure, it‘s a stiff headwind, but the Fed is still as easy as can be, and the copper to 10-year yield ratio remains constructive on the weekly chart, and starting to doubt the decline‘s veracity on the daily one.

Oil is a great example of the commodities fever being far from over, and I‘m looking for more (basing) strength in black gold in spite of the oil index getting inordinarily spooked alongside many real assets. That‘s consistent with the persistent inflation not yielding much at all.

Bitcoin and Ethereum also appear buying into the hawkish Fed narrative, when in reality money is still loose. But the dollar effect is in play in cryptos too – even if the dollar is range bound on high time frames, its current upswing hasn‘t fizzled out yet – the markets aren‘t yet near doubting the Fed. 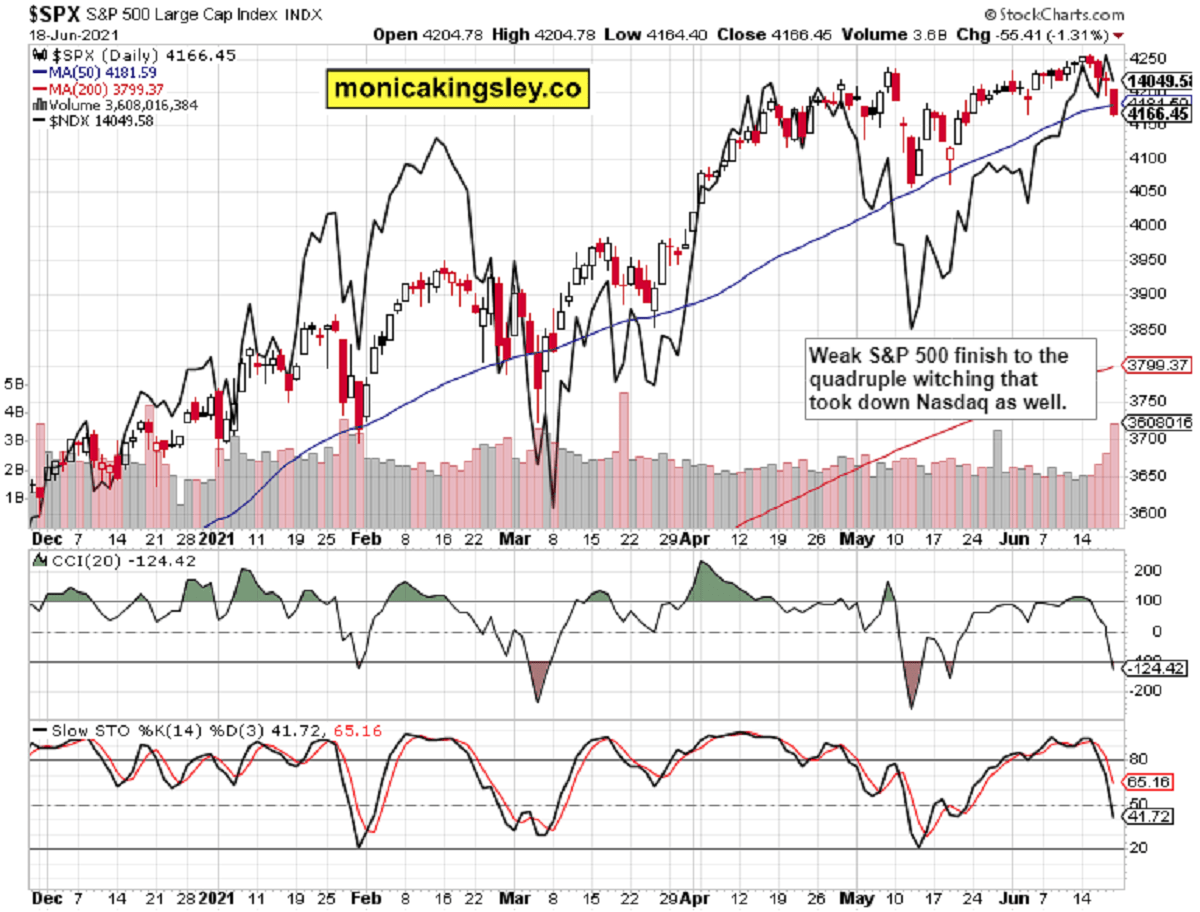 S&P 500 daily downswing still looks to be part of a correction, and no topping pattern. Nasdaq has held up relatively well, and I‘m expecting more strength in tech, followed gradually by value.

The intraday reversal in high yield corporate bonds is what matters the most, and better be followed by local bottom forming here.

Technology has been quite resilient, contrasting with the doom and gloom in value or more lag in smallcaps.

Gold and miners are reacting as if tightening was already on, and real rates actually not declining. While the dollar link has been more influential, gold price action next would decide the fate of both technical factors mentioned in the caption. Another, stronger support line including 2019 lows, is below.

Silver has been and is likely to outperform gold, and in hindsight, the current storm would be of the rea cup variety. While copper rebound isn‘t here yet, the ratio to 10-year yield indicates a reprieve. 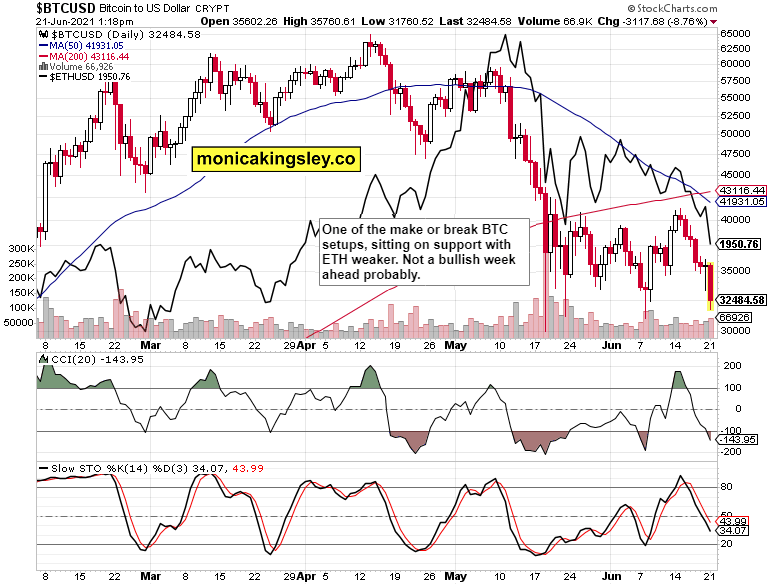 Neither Bitcoin nor Ethereum chart is bullish, and the only argument not to boot, is the presence of two BTC supports.

S&P 500 is approaching a deciding point in its still reflationary era. Value stabilizing in the face of rising tech and Treasuries would be the next bull market run objective.

Gold and silver aren‘t out of the woods just yet but tentative signs of stabilization look to be here. Conquering the pre-FOMC levels, attacking $1,900 seems for now to be more than a few weeks away.

Bitcoin and Ethereum aren‘t on an immediate winning streak, and the recent closing lows in Bitcoin (below 33,000) remain to be monitored for a turn in sentiment. The weekly basing pattern though can‘t be ignored, making a break below 30,000 unlikely to succeed the earlier we were to move into the 35,000 – 40,000 range. That‘s a big if.