New hires often contribute to a small business’s development, bringing economic growth and success to particular industries. But with some states offering a limited talent pool, and lower than average educational quality, where in the US do these variables translate into SMB success?

To gain a better insight, GoCardless conducted research across the US, analyzing each state’s talent pools, and comparing it with the educational quality of the state.

Then looking at the states with the most new hires within SMBs, and publicly available data streams, GoCardless can reveal how these factors impact economic growth and specific industries.

Montana came first, as the state has 65% of all employed citizens working for a small business (245,758 people). However, analysis found that Montana’s education ranking was more average in comparison with other states, coming in at 53.4.

Vermont followed closely behind, with 61% (157,322 people) of the state’s workforce belonging to a small business. However, its educational quality ranked much higher at 70.1, placing it in the top three for teaching level.

Despite this, the data revealed that educational quality doesn’t always translate into a larger talent pool for small businesses to rely on.

Mississippi’s educational quality was ranked 19.3, whilst 47% of its working citizens are employed by a small business (436,567).

This can also be seen in West Virginia, as half of its working population has been hired by a small business (1,553,543), whilst its education ranking sits at 21.

New hires can indicate success, how much does a large talent pool contribute to economic growth?

West Virginia has seen the greatest economic growth since 2016, after a GDP growth of 24%. Vermont follows with 22% and Idaho with 21%.

However, Rhode Island placed at the bottom of the economic growth table, with 8%. 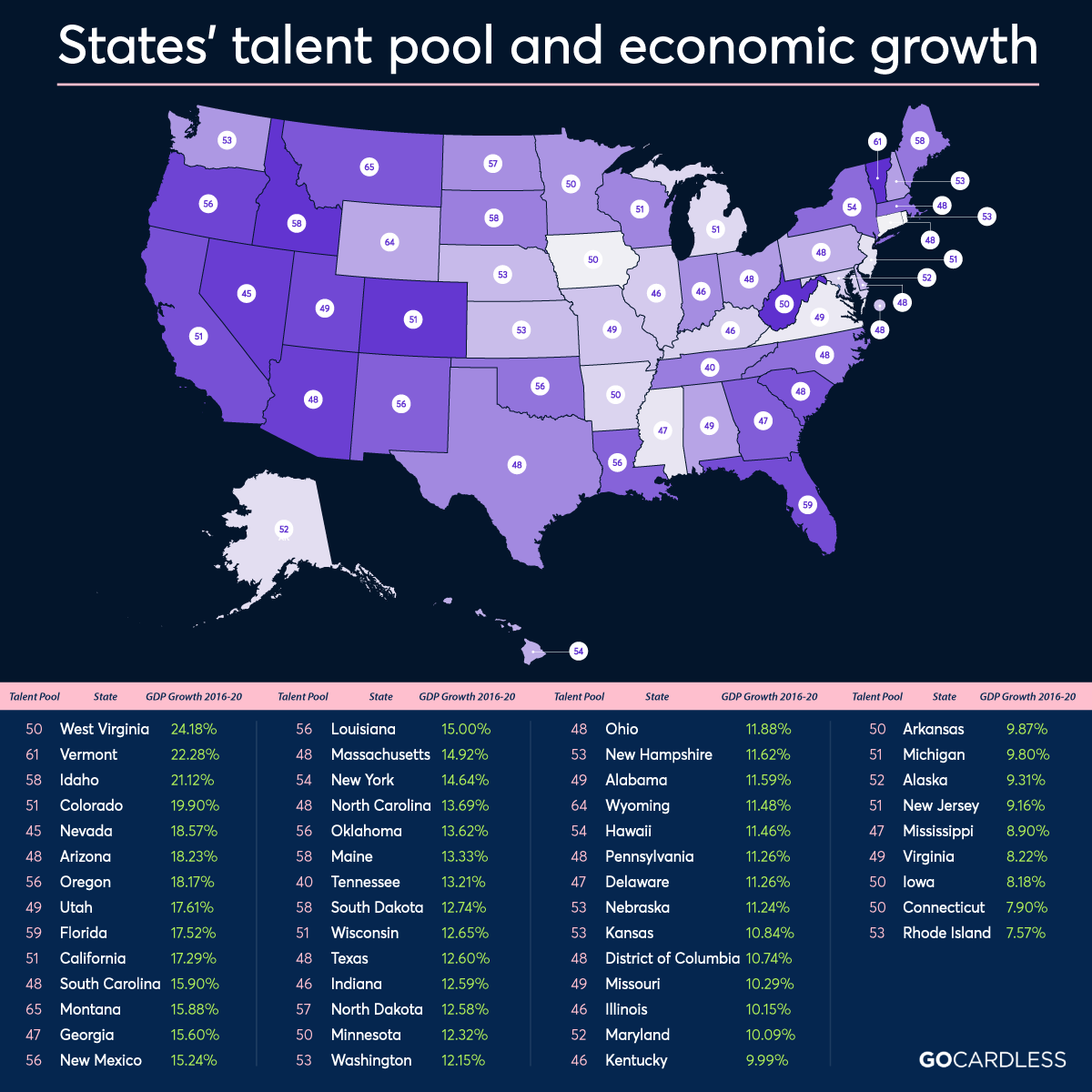 The data also indicated which industries have benefited from these talent pools the most, by hiring the most amount of employees.

The Construction industry took the top spot, offering the most jobs in small businesses across the most states (16) including, New Mexico, Idaho and North Dakota.

The Scientific and Technical industry followed, with smaller businesses hiring for the most jobs in states, including Delaware, Maryland and the District of Columbia.

Retail came third after small businesses in this sector hired the most people across the US, including New York, which is actually home to four million small business employees.

A spokesperson for GoCardless said: “It’s always exciting when a small business begins expanding their workforce. But it can get tricky for them if the talent pool doesn’t have potential employees that can fill certain roles.

“We wanted to find out which state actually brings the most opportunities for SMBs ready to welcome new employees. It’s great to see that our data showed that lower educational quality isn’t standing in the way for people ready to join a growing business too.

“We hope to see all states improve across the board over the next few years, so that all smaller businesses can have the same hiring opportunities.”

GoCardless analyzed 12 key publicly available data streams to demonstrate the states with the greatest talent pool, including SMB profiles from each congressional district, published by the Small Business Administration.

As well as the educational rankings based on data at the World Population Review, analyzing each individual state to find out the quality of their education.

The data revealed the top three states which have the greatest talent pool in comparison to its educational rankings.