The European Central Bank held its monetary policy meeting last week. It was an important event, as it was the first meeting since the adoption of the new ECB’s strategy, and as the ECB has introduced some changes. It left the interest rates unchanged, but it modified its forward guidance.

Long story short, the ECB announced that it would keep its policy rates at ultra-low levels for even longer than previously pledged, as it doesn’t want to tighten prematurely:

In support of our symmetric two per cent inflation target and in line with our monetary policy strategy, the Governing Council expects the key ECB interest rates to remain at their present or lower levels until we see inflation reaching two per cent well ahead of the end of our projection horizon and durably for the rest of the projection horizon, and we judge that realised progress in underlying inflation is sufficiently advanced to be consistent with inflation stabilising at two per cent over the medium term. This may also imply a transitory period in which inflation is moderately above target.

Previously, the ECB maintained that it would keep the interest rates unchanged until inflation expectations converge with the central bank’s target. The change implies that the ECB is unlikely to raise the interest rates until at least 2023, as this is when the projection horizon ends. Central bankers want inflation to be stable at the target, and they won’t hike without tapering quantitative easing earlier.

Additionally, the ECB has decided to keep the pace of its asset purchases under the Pandemic Emergency Purchase Programme at the current (faster than it was originated) pace over the third quarter of 2021:

Having confirmed its June assessment of financing conditions and the inflation outlook, the Governing Council continues to expect purchases under the pandemic emergency purchase programme (PEPP) over the current quarter to be conducted at a significantly higher pace than during the first months of the year.

So, the ECB’s monetary policy has become even more accommodative. The alteration could be explained by two factors: the ECB’s new strategy and the Delta variant of the coronavirus. But the real reason is, of course, protecting the European government from the market interest rates – however, this is a topic for another discussion.

I have covered both of the ‘official’ factors recently, warning my readers that the change in the strategy implies that the ECB has adopted an even more dovish stance and that the spread of Delta could prompt the central banks to further loosen their stance. This is exactly what has happened – as Christine Lagarde pointed out during her press conference:

The recovery in the euro area economy is on track. More and more people are getting vaccinated, and lockdown restrictions have been eased in most euro area countries. But the pandemic continues to cast a shadow, especially as the delta variant constitutes a growing source of uncertainty.

What does the change in the ECB’s monetary policy imply for the gold market? Well, one could say that more dovish central banks are positive for gold, which likes the environment of low interest rates and bond yields.

However, economics is about relative values. So, from the point of view of the comparative analysis, the ECB’s dovish shift is bad news for the yellow metal. This is why the Fed looks hawkish in comparison to the ECB, its main counterparty. After all, the Fed has actually started talking about tapering and monetary policy normalization, while the ECB has just announced that it would keep its quantitative easing at an elevated pace and would maintain its ultra-low interest rates for even longer.

Hence, the greenback appreciated relative to the euro after the ECB’s monetary policy meeting. Although a stronger dollar creates downward pressure on the yellow metal, the price of gold barely moved and is still trading around $1,800, as the chart below shows. 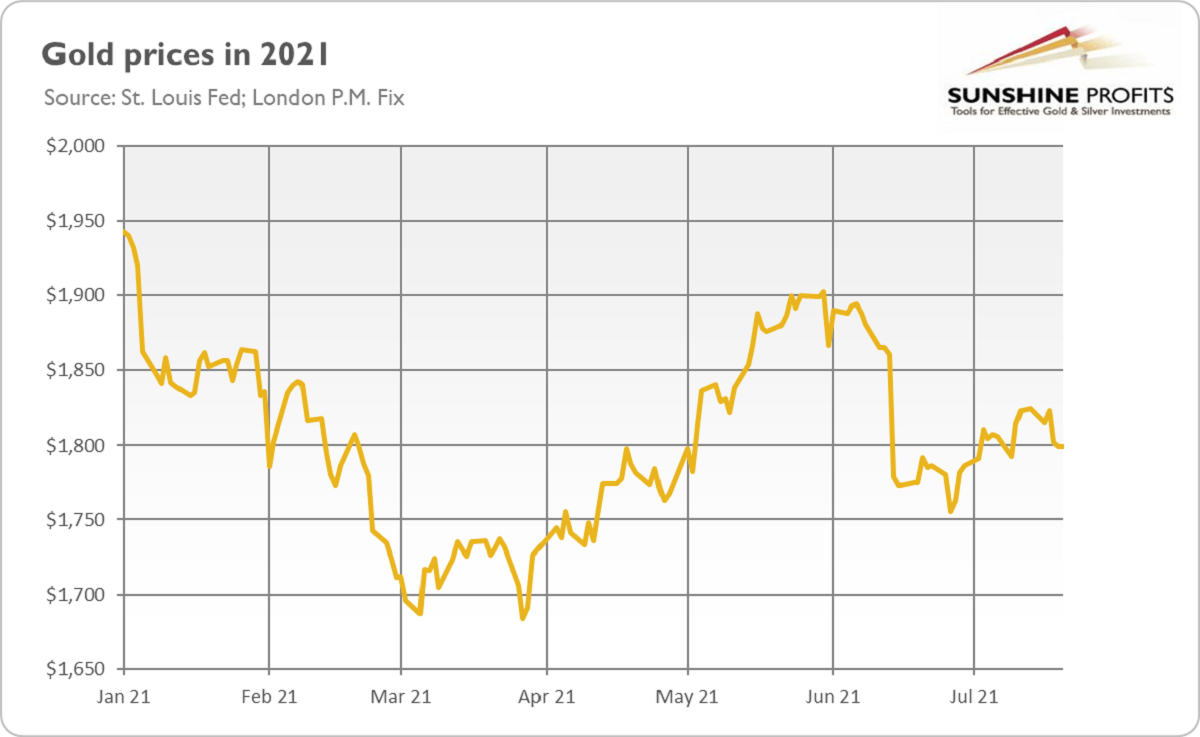 However, there is a silver lining here. Some market participants were actually disappointed that the ECB didn’t provide a stronger adjustment. Indeed, no monetary bazookas this time. Moreover, the ECB’s decision was not unanimous, so there is some sort of a hawkish camp. Last but not least, it might be the case that the Fed will also loosen its stance if the Delta variant spreads in a dangerous way. Having said that, the divergence in monetary policy and interest rates across the pond should be a headwind for gold prices for a while.