Whitney Tilson’s email to investors discussing David Berman and Berna Barshay on retailers; Americans are flush with cash and jobs. they also think the economy is awful; don’t let your political views affect your investment or vaccination decisions; his reply to a reader about Aaron Rodgers.

1) My friend David Berman of Durban Capital, who I quoted in my e-mail a week ago, is (along with my colleague Berna Barshay) one of the smartest retail sector analysts I know. He was on CNBC on Monday. Here's the four-minute video and his summary:

U.S. consumer spending is on fire, according to my proprietary data. The sales growth rate has tripled from pre-pandemic (up 29% over two years), inflation is heading higher, and I expect stronger earnings and higher bond yields. Retailers are flush with cash and have never seen better times. I'm expecting a strong holiday season, high margins with less on sale, offset somewhat by higher wages and freight and shipping costs.

Berna is also bullish on retailers and wrote about two of her favorites, Five Below Inc (NASDAQ:FIVE) and Foot Locker, Inc. (NYSE:FL), in her Empire Financial Daily from a week ago.

Americans Are Flush With Cash and Jobs

2) David and Berna are no doubt correct that the retail sector is white-hot, as is the overall economy, thanks to U.S. households being in a better financial position than they've been in for years. This year alone, employment has risen by more than five million jobs, and a record number of Americans say this is a good time to find a quality job. This New York Times article has some additional bullish data points:

Workers have seized the upper hand in the labor market, attaining the largest raises in decades and quitting their jobs at record rates. The unemployment rate is 4.6% and has been falling rapidly. Cumulatively, Americans are sitting on piles of cash; they have accumulated $2.3 trillion more in savings in the last 19 months than would have been expected in the pre-pandemic path. The median household's checking account balance was 50% higher in July of this year than in 2019, according to the JPMorgan Chase Institute.

Yet, interestingly, when surveyed, Americans say that the economy is in terrible shape. The same article, Americans Are Flush With Cash and Jobs. They Also Think the Economy Is Awful, notes:

Yet, workers' assessment of the economy is scathing.

In a Gallup poll in October, 68% of respondents said they thought economic conditions were getting worse. The share who thought things were getting better was lower than in April 2009, when the global financial crisis was still underway.

Reasonable people can disagree about the current state of the economy and, even more so, what it's likely to do in the future.

But, when thinking about these important issues, it's critical to set aside your emotions and political views.

For example, if you're a Republican, you probably think President Joe Biden is a disaster and, because of this, may believe that we're heading into a period of economic (and stock market) decline.

But if you are therefore selling stocks, then I think you're likely making as big of a mistake as Democrats did under President Donald Trump, who thought he was a disaster and dumped their stocks.

It's remarkable how much people's politics affect their economic views. For instance, in October 2016, just before that year's presidential election, the University of Michigan's Index of Consumer Sentiment and Component by Political Party was much higher for Democrats (102.1) than for Republicans (74.4). It undoubtedly reflected the assumption of a Democrat in the White House and the widespread expectation that this would continue when former Secretary of State Hillary Clinton defeated Trump.

But when Trump pulled the upset, the numbers more than reversed. The next time the survey broke out results by political party, just after Trump took office in February 2017, consumer sentiment among Democrats had crashed to 77.5, while it soared to 115.7 among Republicans.

Similarly, just before the last election in October 2020, consumer sentiment was 72.4 for Democrats and 98 for Republicans. But by February 2021, the numbers had again reversed to 92.4 and 63.6, respectively. Here's a chart showing this post-election shift, published in New York Times' columnist Paul Krugman's recent November 9 newsletter. 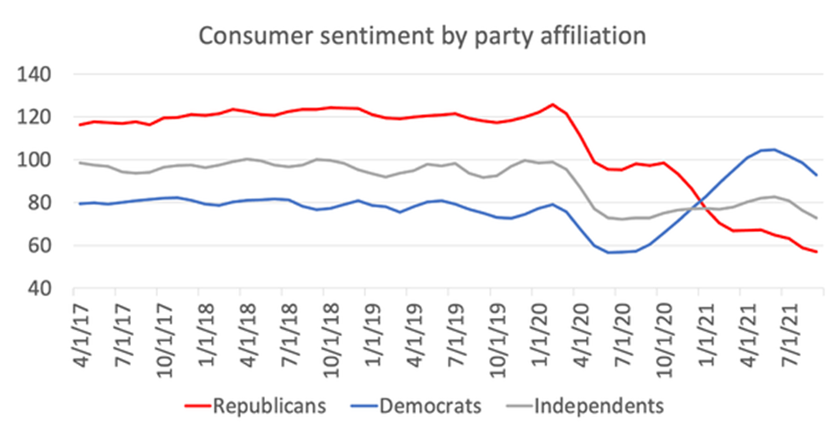 Of course, most people's political views don't just affect their consumer sentiment but also their investing-related analyses and decision-making.

But this is extremely destructive to your long-term returns, so don't let this happen to you!

3) One way I try to reality-test my thinking is to check a New Zealand-based prediction and betting site, PredictIt, which allows people to bet real money on political and economic outcomes. I've found PredictIt's markets to be extremely accurate over time, even though many are small and thinly traded (the site only allows each user to bet a maximum of $850 per market).

In my October 26 e-mail, the example I used was the Biden administration's reconciliation bill (also known as Build Back Better). At that time, the PredictIt market showed that there was "about a 21% chance that Democrats fail to pass the bill or that it's smaller than $1.5 trillion..."

Interestingly, since then, the odds spiked to 51% (presumably because progressives traded away their biggest negotiating chit when they agreed to vote for the infrastructure bill), as you can see in this 30-day price/odds chart: 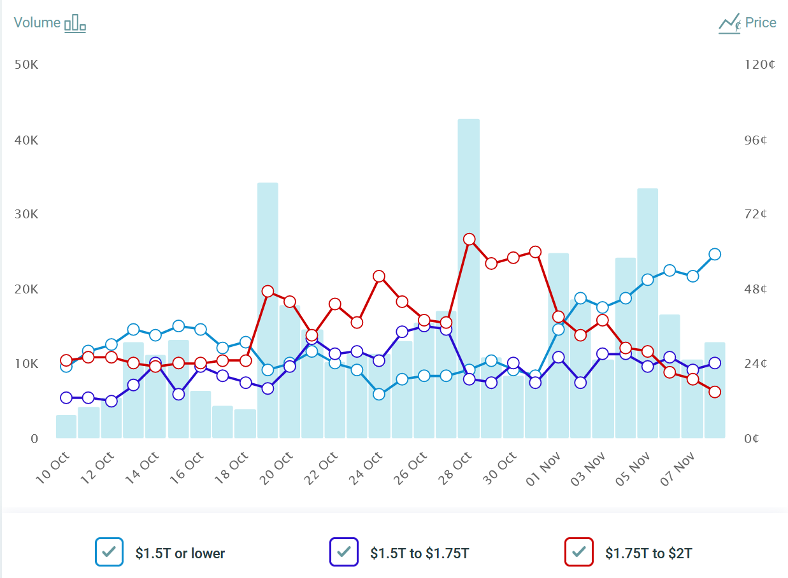 If you own a stock because you think it will benefit from the passage of this bill, the odds have shifted materially against you in the past 10 days. It's important to recognize this and adjust your investment accordingly, irrespective of whether you want the bill to pass or not.

Here's another PredictIt market I follow because it has enormous implications for investors: What will be the balance of power in Congress after the 2022 election? The latest odds show a 66% chance that Republicans take back both the House and Senate: 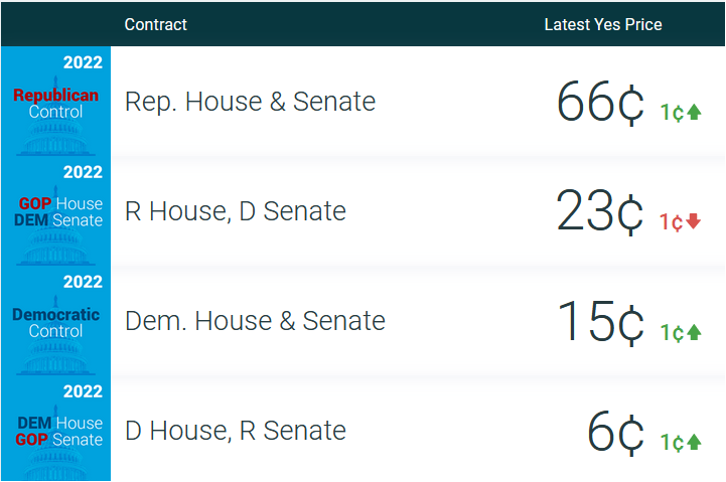 Reply To A Reader About Aaron Rodgers

4) It's even more important not to let your politics influence your medical decisions because the negative outcomes are much worse than losing money: illness, hospitalization, long-term lingering symptoms, and even death.

Yet, that's what's happening to an even more extreme degree when it comes to Americans' choices about the COVID-19 vaccines. They were developed in record time thanks in large part to President Trump's Operation Warp Speed. But in one of the most bizarre and tragic reversals I've ever seen, it's his supporters who are disproportionately refusing to get vaccinated.

As you can see in this recent survey, 90% of Democrats have already received one dose, and only 2% say they will definitely not get vaccinated, versus 61% and 31%, respectively, for Republicans: 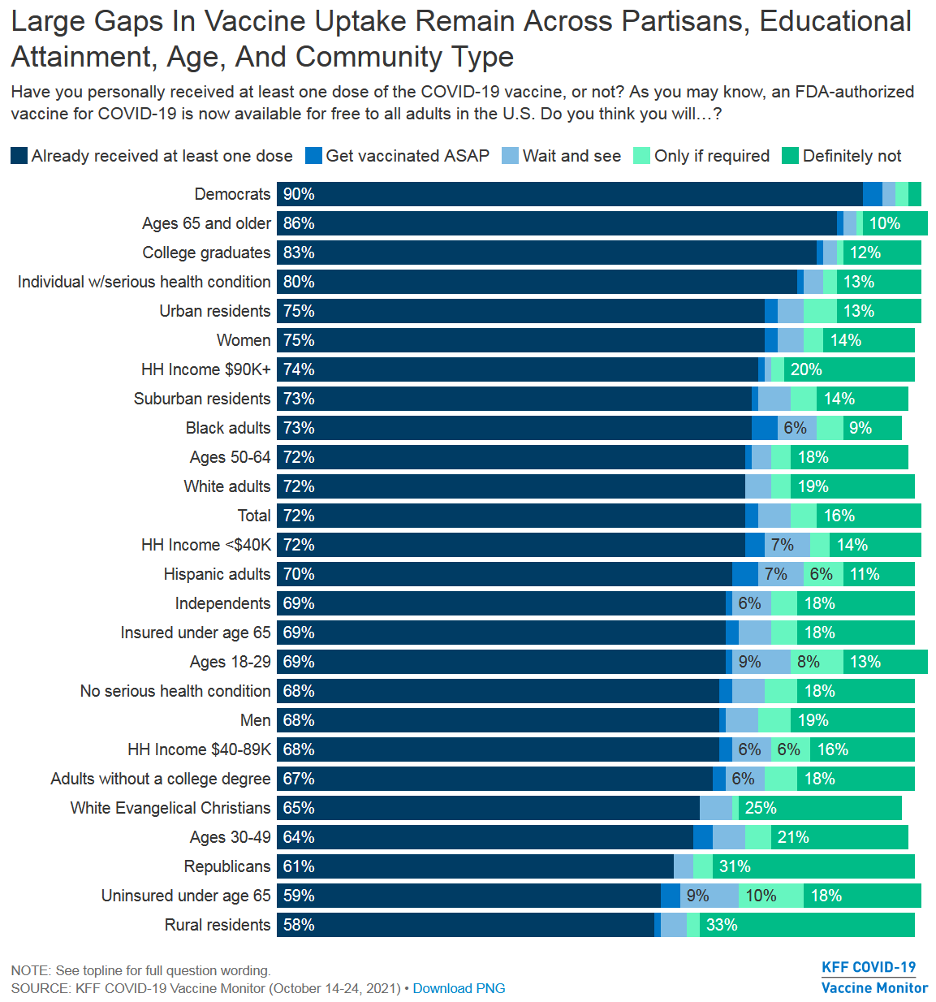 I continue to closely follow the pandemic and send periodic updates to my coronavirus e-mail list (which you can sign up for by sending a blank e-mail to: [email protected]).

In yesterday's e-mail, I addressed the questions one of my readers raised:

"Hi Whitney, In an attempt to precede your future e-mail reaction to [the] Aaron Rodgers interview, I wanted to raise a few issues that you have yet to address in your COVID-19 vaccine e-mails.

"1. Natural immunity – many studies have shown that natural immunity far exceeds vaccine-related immunity given its reaction to all parts of the virus rather than only the spike protein which can mutate.

"2. Ivermectin – even if you think there is no research-based support of benefit, there is no harm in taking this very cheap drug which has safely been used all over the world. Also, why has there been scant research on Ivermectin? Could it be that Big Pharma controls today's MDs, politics, and the media?

"3. Hypocritical – why the same people who championed our medical workers, police, and firefighters who had to brave COVID-19 to save lives before the vaccine are now perfectly OK with firing them from their job if they choose to make a personal choice based on their own health circumstances.

"Aaron Rodgers raised many great points that many who are outspoken about the vaccine are unwilling to discuss publicly. Why is that?" – Andrew S.

You can read my reply here.

Every time I write about the vaccines and encourage people to get vaccinated (my free book offer is still open!), I get plenty of flak from angry readers.

So why do I keep returning to this topic? Because I get far more e-mails like these (all just in the past few days):